Rise of the Planet of the Apes reigns supreme. 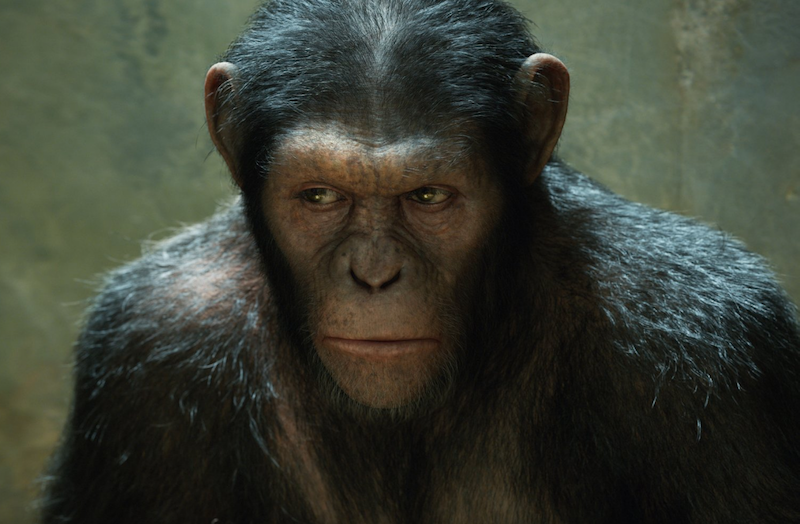 Carnage, Simon Amstell's recently-released BBC mockumentary, was described by The Independent as "the world's first vegan comedy that is actually funny." I've yet to see it, but the headline reminded me of frequent complaints from Tyler Smith, co-host of the Battleship Pretension podcast, about Christian films being overly didactic. Narrative films with animal-rights themes suffer from a similar problem. For example, while I love Denis Hennelly's Bold Native, it can come across as preachy. Below is a run-down of my favorite films that have animal rights as part of the story.

5. Chicken Run (2000)—Likely because children haven't been fully socialized into speciesism, films marketed toward them often present a more critical view of human violence toward animals. This stop-motion masterpiece, from the creators of Wallace and Gromit, imagines chickens escaping certain death on a farm, taking inspiration from classic prisoner-of-war movies like The Bridge on the River Kwai and The Great Escape. It's a very funny film, but the jokes are rarely about the birds' plight, which directors Peter Lord and Nick Park take surprisingly seriously.

4. Noah (2014)—In Darren Aronofsky's retelling of the biblical flood myth, Noah is vegan and God sends the apocalyptic deluge at least partly in response to humanity's exploitation of animals. While building the ark, Noah's understanding of man's sinfulness hardens into a fanatical misanthropy, which is arguably justified. According to National Geographic, with the exception of some doves and a lone raven, all the animals in the film are computer-generated. One hopes this will be the direction Hollywood moves toward in the future, and legislators eventually mandate the transition by law.

3. White God (2014)—In this Hungarian drama, depicted primarily from the perspective of animals, dogs revolt against their human masters after enduring a wide range of abuses. Those who worked on the film insist the canines were treated humanely. One can tell the animals used in the dog-fighting scenes are playing, but other sequences in the movie raise serious concerns. Regardless of how the filmmakers elicited certain behavior from their nonhuman actors, I oppose the use of animals on set. I wish director Kornél Mundruczó had employed computer-generated dogs, as it would make my feelings about his movie much more straightforward.

2. The Plague Dogs (1982)—It's not hard to see why this movie failed at the box office. On the one hand, it's animated, which generally suggests children's fare. On the other, it makes no effort to soften the horror of its subject, vivisection. Based on a novel of the same name by Richard Adams, author of Watership Down, it's one of the bleakest films I've ever watched. Unfortunately, it's very hard to see, as it's not available on North American DVD or major streaming services. The only bootleg copy I could find online was terribly blurred. I hope that whoever owns the rights to Martin Rosen's gem rescues it from obscurity.

1. Rise of the Planet of the Apes (2011)—Following a similar plot to White God, this tour de force from director Rupert Wyatt tells the story of chimpanzees who rebel against human authority. My understanding is that while the horses used are real, all the apes are computer-generated. Andy Serkis' phenomenal motion-capture performance deserved an Oscar nomination at the very least. This reboot of a franchise that began in the late-1960s, which was in turn based on a French novel, is the best narrative film with animal-rights themes ever made.