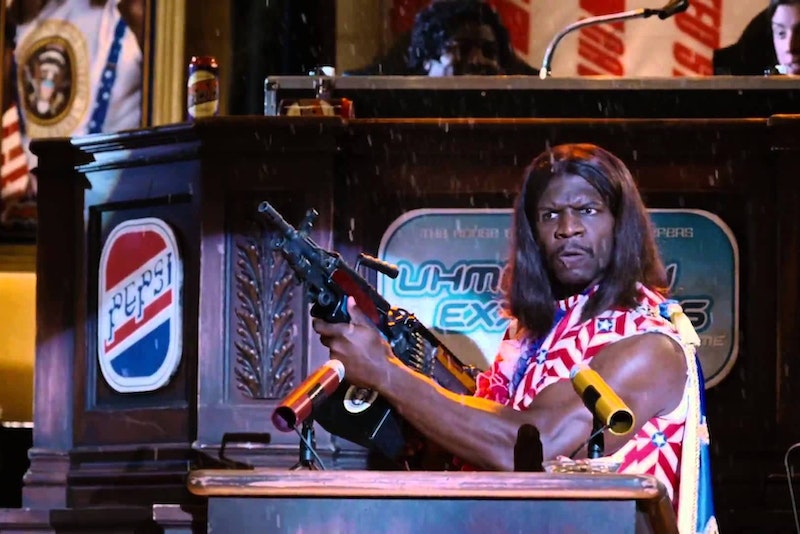 Idiocracy screened at Baltimore’s Senator Theater on Wednesday, the first in their spring revival series. Mike Judge’s 2006 film has become a cultural flashpoint for “where we are now,” and it’s an extremely lazy comparison, almost as bad as bringing up Orwell’s 1984 and referring to anything as “1930s Germany” (take your pick on that one—Tim Allen, Sarah Silverman). It’s all bad memory and received wisdom. Idiocracy is not the movie you remember. As I was leaving the theater, I heard a young woman remark, “It’s so weird watching this movie now, you know, with Trump and all.” Christ! Let’s not get carried away. Naturally, everyone wanted to know what Judge thought about his movie 10 years later when our country was going through a distressing cultural sociopolitical spasm. He brushed it off: “I’m not a prophet. I was off by 490 years.” I like Judge a lot, but we’re nowhere near the inbred garbage-covered wasteland of America in 2505. Everyone making the comparison either doesn’t remember the movie or never saw it in the first place.

In 2014, with Trump hysteria still a year away, Matt Novak wrote a concise takedown for Gizmodo on the movie’s exalted status among liberals: “Idiocracy lays the blame at the feet of an undeserved target (the poor) while implicitly advocating a terrible solution (eugenics) […] Idiocracy continues the great American tradition of producing media that bemoans the terrible state of America’s collective intelligence. But as a piece of historical futurism (yes, it really has been nearly a decade since this movie was produced) it has a worrisome message.”

The premise of Idiocracy is evergreen, but the actual movie is very much a product of its time: filmed in 2004 and delayed until 2006, it screams anti-Bush frustration. The casual racism of the era is on display in one of the opening scenes, when a military officer gives a presentation that inadvertently shows how “deep undercover” he went: drinking Hennessy and smoking blunts with black pimps and gang members. This is supposed to be hilarious: the guy that looks like Walter Becker from Steely Dan “getting down.” As he puts Luke Wilson and Maya Rudolph under for their freezing, he slips this in: “What up, my niggas?” I was on a flight from London to Washington, D.C. last week, and I saw five people reading George Orwell’s 1984 scattered through the aisles. Idiocracy is as imprecise an analogy for our current moment as Orwell’s book, and yes, it’s shockingly disdainful of poor people and minorities. But that was the rap against George W. Bush: our idiot President, voted in by dupes, kooks, and hillbillies sequestered in meth huts in blood red states. The wandering, clueless oafs that populate the ruined world of Idiocracy call to mind our 43rd president and the stereotype of his base. The world of garbage, stupidity, and fast food is an outdated vision of the future—can you imagine any movie coming out today that takes place 500 years in the future without any kind of nuclear event, or a total decimation of all society? Fears of the Bush years define Idiocracy—it has nothing to say about Trump or America today.