Once upon a time, the screens I watched were drenched in blood. 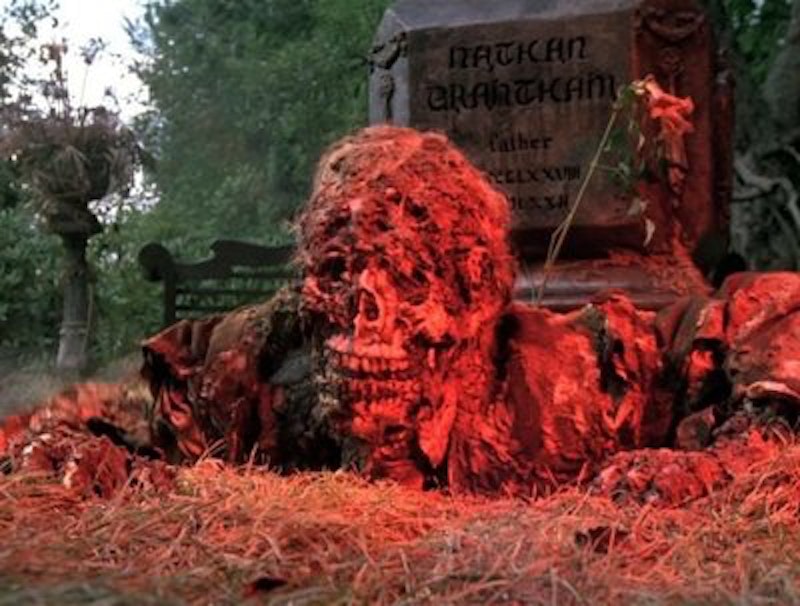 The action and horror films were of varying quality, mostly bad yet occasionally transcendent, but my father and I watched them all—everything our local video stores, then referred to as “rental clubs,” kept in stock.

The 1980s were a strange time: more alive, more honored, more real in historical memory than the forgettable, Bill Clinton-and-Beanie Baby-dominated decade that followed. It was, I suppose, a terrible time for cinema, particularly during the second Reagan administration when movies were increasingly shot with VHS release in mind, but also a great time, because production standards were so marvelously low that a fair amount of creative schlock slipped through the cracks.

For reasons that remain mysterious but likely had to do with his involvement in various illicit activities, my father worked sparingly from 1982, the year I was born, until 1989, the year he purchased a franchise car dealership. During that span, he did almost nothing except consume brainless fare, televised sporting events throughout the day and “rental club” Betamax and VHS tapes that ensured he would be entertained until well past midnight. Since my half-brother went to high school and had some kind of social life outside our home, it fell to me—a lonely child who would not be enrolled in either public or private school until the tween years—to watch with him.

Even beyond the ethical implications of forcing a small boy to sit through the likes of Creepshow, RoboCop, Aliens, Predator, and—heaven forfend!—Body Heat, the practice had an impact on me. While a film’s plot would resonate from time to time, or a certain compelling scene, often tied to a Brian De Palma movie, would become blazoned in my memory, mostly my little unformed baby brain wondered about the artifice of it all.

I knew that what I watched was fake, because my father unfailingly pointed this out. “That blood looks like spaghetti sauce,” he’d say. Or, “Christ, he’s wearing more makeup than Dame Edna.” On and on in this manner, a naive but incessant critique of material he viewed as existing solely to please him. His knowledge of great directors—of cinematic history generally—extended no further than an encyclopedic obsession with whatever leading men were allegedly in the closet (often accompanied by an equally strange remark about how such a man’s man, say Rock Hudson or John Travolta, could “do whoever or whatever the hell he wants”), but my father cared deeply about craft and performance, in his own idiosyncratic way.

The realness was all. When the two of us watched professional wrestling, he enjoyed matches in which men such as Ric Flair and Dusty Rhodes willingly gouged their own foreheads with razorblades, since he felt that blood gave the viewer his money’s worth. And, perhaps unsurprisingly for a man who had loved The Thief of Baghdad as a child and esteemed it well beyond The Wizard of Oz (“it looked like a bad high school play,” was his one-note, oft-repeated criticism of that studio classic), he watched films for directorial money shots: an amputation, a head smashed like a cantaloupe, a body riddled with bullets, hopefully staged in such an evocative manner that he couldn’t possibly forget it. If a payoff scene failed to pass muster, he’d shake his head and head and mutter about being ripped off.

As near as I can place it, my father’s love for the movies began to wane when we saw Terminator 2: Judgment Day at the theater. Since we lived in a rural area, getting to the movies was no mean feat—schlepping 30 or so miles, as the crow flew—and so he undertook this pilgrimage only when he assumed he was certain to be entertained. Arnold Schwarzenegger had entered my father’s tough-guy pantheon at some point during the 1980s, catchphrase-spouting his way into the old man’s heart, and so he expected the sequel to his beloved The Terminator to be nothing short of a masterpiece.

We hadn’t seen The Abyss, so I don’t suppose my father was familiar with James Cameron’s growing infatuation with computer-generated imagery. Cameron’s use of CGI to animate elaborate reconstructions of actor Robert Patrick’s T-1000 terminator body thus proved a bridge too far. All the way home, my father complained about how jarring those moments had been, comparing it to Who Framed Roger Rabbit but noting that, at least there, animation was acceptable because the characters kept acknowledging the obvious unreality of it.

I had enjoyed Terminator 2, so his criticism struck me as unfounded and I put it far out of mind. But as time passed, the essential rightness of it became manifest. Along with the pressure to release films as bloodless PG-13 blockbusters to recoup enormous production costs and an unwillingness to look past intellectually bankrupt “franchise properties” like those created by Marvel and DC, computer-generated imagery has created a flat, barren cinemascape about as aesthetically pleasing as a strip mall parking lot. Sure, there are plenty of spaces available, but who’d ever want to go there?

Such work has diminished the value of great directors. Although my father saw neither Meet the Feebles nor the first installment of The Hobbit, he surely would’ve been shocked to discover that the same Peter Jackson who had produced the ribald puppet scenes in the former was responsible for the lamentable high-resolution “Dame Edna” makeup fails in the latter. And what good is the work of a few hand-painted Studio Ghibli productions when set against a billion iterations of The Boss Baby, a CGI film so insipid in conception that it may as well have been playing in theaters since 2005?

And never mind these toothless, spineless PG-13 “spandex” hero films. Marvel Studios, with its consequence-free multiverse of interlinked narratives, has crafted stories far more disgusting than anything served up in Re-Animator or Dead Alive. In Marvel's world, where bad guys fall dead without bullets lodged in their chests and half of New York City can collapse without overtaxing a single ambulance, we viewers encounter the ultimate vulgarity: a world in which violence not only doesn't hurt, it doesn't matter to us or to the thousands of technicians who helped simulate it.

These developments might cause my father to roll over in his grave—that is, if his remains hadn’t been incinerated in a cremation furnace, his body reduced to a very real pile of ashes like some doomed boss bad guy in one of those beautiful, dumbass movies both of us loved.