On I Don’t Feel At Home In This World Anymore, the debut feature from writer/director Macon Blair. 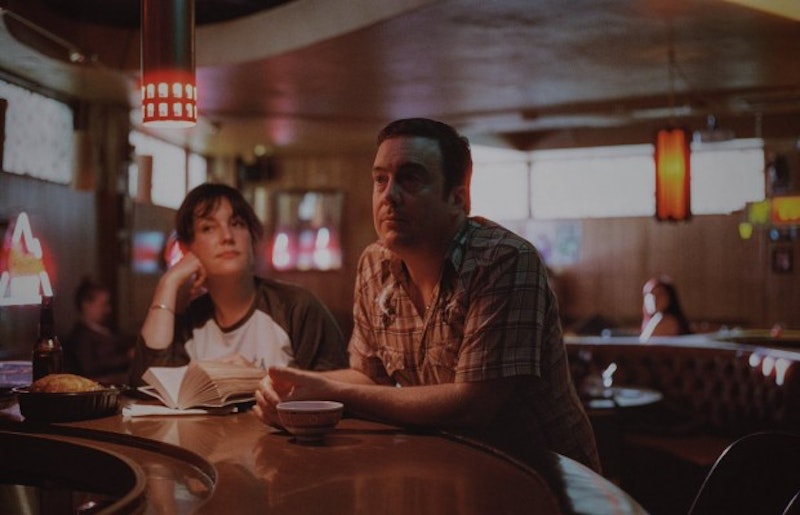 An ordinary person is plunged into a dangerously violent situation that is (occasionally) amusing. That’s the elevator pitch you’d use to sell writer/director Jeremy Saulnier’s films. His longtime friend Macon Blair appears in most of them, lending a stoic soulfulness to what, invariably, are pulpy, non-ideological proceedings. If I Don’t Feel At Home In This World Anymore, Blair’s directorial debut, runs a parallel track, it’s at least willing to laugh harder. The premise is blood simple: someone burglarizes nursing assistant and human doormat Ruth (Melanie Lynskey), who becomes obsessed with justice; recovering the stolen belongings isn’t satisfaction enough. Along for this suburban vigilante thrill-ride is Tony (Elijah Wood), a rat-tailed caricature who might as well have wandered into this picture from Napoleon Dynamite or Ghost World. Their quest leads them into the orbit of small-time junkie grifters for whom the plot-initiating score was the penultimate domino in a long string.

Though sometimes too quirky, goofy, and tangential for its own good, I Don’t Feel… isn’t a movie about nothing or only about itself; it wears its governing themes of empowerment and self-confidence proudly, even broadly. Lynskey’s Ruth begins the movie as a portrait of scuttled-dreams disappointment—the hard-luck friend you always hesitate to open the door for, who swears while reading your kid a bedtime story—but it’s an undeniable pleasure to watch this character slowly grow a spine in time for blood to start spurting.

Given that, it feels strange that my favorite part of this movie comes towards the end, in a series of scenes suggesting that writer/director Blair is a far more cynical and less humane filmmaker than he actually is. Posing as police, Ruth and Tony journey to a remote mansion, expecting to confront the burglar. Instead, they encounter a bored, affable trophy wife and her wealthy, douchebag husband. The husband derides Ruth’s desire for justice (“I just want people to not be assholes”), offering to compensate her for trouble even while conceding, with an exhausted shrug, that his thief son is an incorrigible fuck-up. “You can tell yourself you’ve done something here,” the husband sneers, as the pair depart. “Really took a stand.”

—I Don’t Feel At Home In This World Anymore is available for streaming on Netflix.