The Church of the Movie Theater

I won’t stream or binge-watch or live-tweet TV shows. 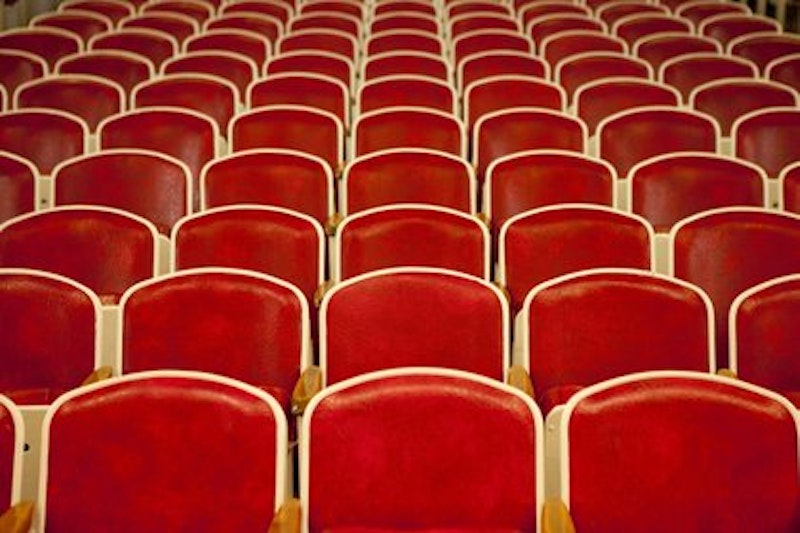 There’s no escaping the new “golden age” of television. The Internet is the new TV, as our national pastime/four-to-six-hour-a-day time waster. But it’s not the cable box, the flat-screen or the structure of network programming experiencing a cultural renaissance, it’s the episodic format: multiple hour-long installments, stories contained in single seasons (True Detective) or with a planned cut-off (Breaking Bad, Lost, The Sopranos, The Wire). Shows that released entire seasons at once for immediate streaming and, sorry, binge-watching like House of Cards, Orange is the New Black, and Arrested Development are, at least currently, in vogue. I remember walking home one day in the fall of 2012, and running into a pick-up crew outside my apartment. Affixed to the door were signs letting everyone know that something called House of Cards would be filming in the area for the next few days. When asked by a friend what it could be, I blithely dismissed it as some low-grade TV movie that we’d probably never hear about again. Yeah...

In casual conversation, Game of Thrones comes up nearly as much as the weather. Although it’s my own fault, I feel left out because I just can’t get with the format, and don’t enjoy the experience. First, watching any mini-series, let alone a show with eight seasons and hour-long episodes, is a huge time commitment, if you’re engaged enough to follow through. The experience of “binge watching” plot-heavy drama is extremely unpleasant for me. I did it plenty when I was a little kid, plowing through all of Arrested Development, the 4400, V, and Futurama seasons on DVD in a matter of days. It’s not dissimilar to gorging on Halloween candy—I feel empty and sick, having gained nothing. Since Netflix streaming has become ubiquitous, I’ve put off checking out every new series that’s lifted like Simba as proof of the long-form episodic format’s aesthetic bloom. I’d love to play Final Fantasy VII again if it was re-jiggered to make the characters look less like beach corral, but would I even want to dip in if I can’t do the 80-plus hours demanded of me to finish the game?

After several aborted attempts to “get into it” with The Sopranos, Breaking Bad, Boardwalk Empire, Lost, and The Wire (the only one I know I’ll get back to soon), I’ve developed this anti-gravitational pull away from watching anything at home except interviews and podcasts, because I don’t get lost in it, and my mind goes elsewhere, and more often that not, I’ll pause a movie or a show 45 minutes in because I’m getting bored. Sure that impulse comes in the theater—and walking out of a movie you paid for is a bigger leap than going to the kitchen to make a cup of coffee or play guitar.

Going to the movies is a seductive experience. This has been the most prominent running theme in Bret Easton Ellis’ superb podcast, weekly since November. He starts nearly every episode with a five-to-10 minute monologue about the decline of “movies as an art form in the culture,” while the guest sits silently, eventually responding with some variant of “Yeah man... I don’t know.” His insistence and the resistance he gets back is pretty hilarious, but I completely agree with Ellis. Seeing a movie in a theater is far more powerful and engaging than anything you can replicate in your room at home. Paraphrasing Ellis, you have to be at the theater at a certain time, the movie will start without you, it will not pause for you to go to the bathroom or order popcorn. The filmmaker has more control over the audience’s senses, but more importantly, the audience has less control: there’s a satisfaction in the submission that comes from seeing a movie theatrically. Theaters are full of ghosts and residual psychic plasma, from the people and films that’ve passed through over the years. This sort of foreplay and setting is completely crucial and often more enjoyable than the movie itself. I can’t count how many mediocre or anonymous movies I’ve sat through in a theater that I would’ve turned off right away at home.

Palaces like the Senator in Baltimore are monuments to this idea, and even at cookie-cutter cineplexes, the size of the image and the surround sound are intoxicating. Even last week when I saw Nymphomaniac, I recognized the feeling of intoxication when slight background noises were piped in from individual speakers in the theater while the screen remained black, creating a true panoramic wideness and a sense of depth. In my mind, it’s hard to get blown away by a show artistically when it never passes through these halls, which I know is an antiquated bias, but going to the theater, no matter the movie, is a religious practice for me.