The Making of Dr. Strangelove 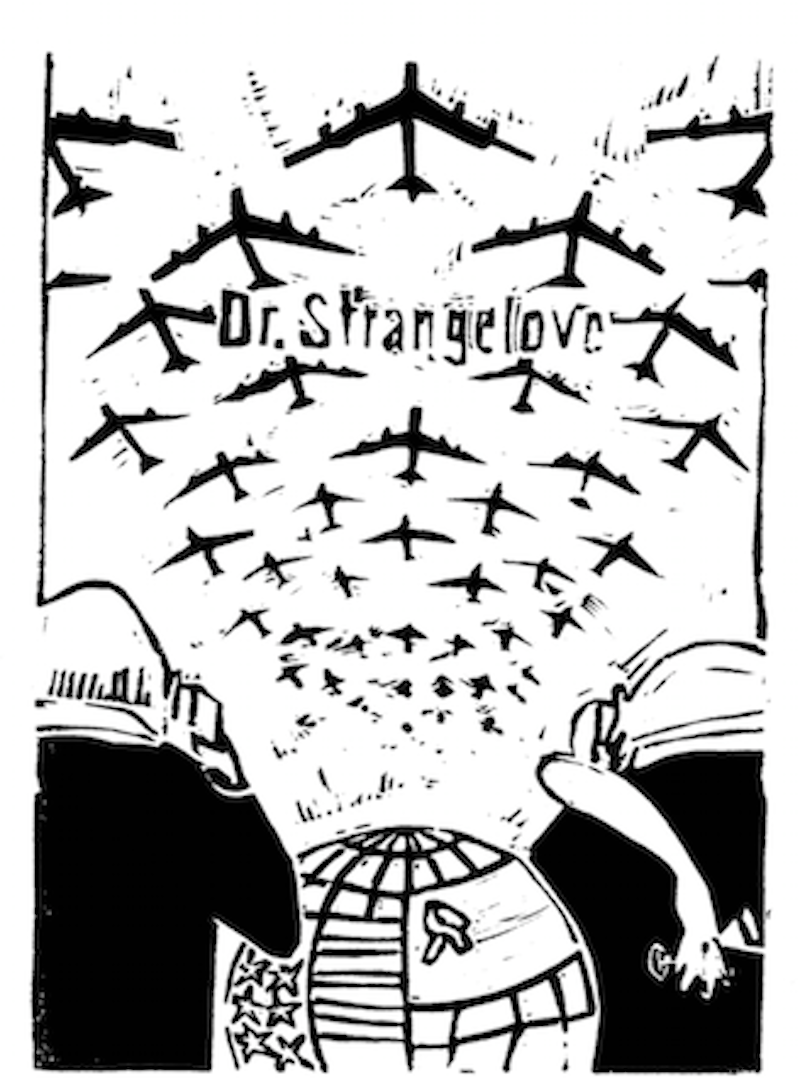 In 1963, America was in a heightened state of anxiety. The country had witnessed the Bay of Pigs fiasco, the beginning of the Vietnam conflict, the building of the Berlin Wall and the Cuban Missile Crisis. The Cold War was at its peak and civilization was at the brink of nuclear annihilation. Director Stanley Kubrick was obsessed with the possibility of nuclear war. He read a novel by Peter George called Red Alert that told the story of a rogue US military officer who attempts to trigger an unauthorized nuclear strike on the Soviet Union. Kubrick paid $3500 to option the screen rights to the novel. He began writing the screenplay, a dramatic thriller he titled Edge Of Doom.

Kubrick completed the screenplay around the time the United States discovered Russian nuclear missiles in Cuba. Public anxiety was so intense Kubrick realized the only way to tell the story was as a satirical comedy. He began reimagining the screenplay in comic form. He explained, “Confront a man in his office with a nuclear alarm and you have a documentary. If the news reaches him in his living room, you have a drama.  If it catches him in the lavatory, the result is comedy.” (An early draft of the comedy screenplay begins with extra-terrestrials observing earth after a nuclear holocaust.)

Kubrick decided his new comic approach required a sense of inspired lunacy. He turned to novelist Terry Southern, writer of the book Candy, which offered an absurd look at modern sexuality. Kubrick told Southern to come up with “the most outrageous thing a character can say and still be credible.” Southern responded with classic dialogue. Base Commander Jack D. Ripper (Sterling Hayden) says, “I can no longer sit back and let the international Communist conspiracy sap and impurify our precious bodily fluids.” Later, President Merkin Muffley (Peter Sellers) yells out, “Gentlemen, you can’t fight in here!  This is the War Room!” Southern came up with the name Dr. Strangelove. Kubrick added the film’s subtitle, “How I learned to stop worrying and love the bomb.”

The film was shot at Shepperton Studios in England. The primary set was the awe-inspiring War Room. Production Designer Ken Adam devised initial sketches inspired by the classic films The Cabinet of Dr. Caligari and Metropolis. The huge triangular room was 130 feet long, 100 feet wide and 35 feet high. A massive electronic “Big Board” showing the path of bombs headed toward Russia took up the back wall. Crewmembers wore slippers to avoid scratching the shiny black Formica floor. The room’s centerpiece was a 22-foot diameter circular table suspended under a ring of light. Kubrick insisted the table be covered by green felt to give the impression of a high stakes poker game (even though the film was shot in black and white).

Ken Adam also had to recreate the interior of a B-52 Bomber without the cooperation of the US Government. His only reference photo was a blurry image of a B-52 cockpit featured on the cover of an obscure book called Strategic Air Command. Adam built the set from his imagination spending hours designing switches and warning lights. His ultimate creation was so accurate that military air personnel thought Adam had obtained unauthorized access to an actual B-52. Kubrick feared investigation by the FBI for revealing government secrets.

When it came to casting, Kubrick approached Peter Sellers, who’d appeared in his last film Lolita. Sellers would play three roles: RAF Captain Lionel Mandrake, American President Merkin Muffley and sinister ex-Nazi scientist Dr. Strangelove. The part of Mandrake was easy for Sellers. He’d impersonated British officers for years. For President Muffley, Sellers initially portrayed the role as a meek, effeminate character constantly using an inhaler to treat a bad cold. Kubrick instructed Sellers to be more serious since Muffley was the one character who understood the consequences of his actions. Sellers mimicked the voice and gestures of Adlai Stevenson for the new persona. The role of Dr. Strangelove was an amalgam of RAND Corporation strategist Herman Kahn and rocket scientist Wernher Von Braun. Much of Sellers’ dialogue was improvised as when he refers to the president as “Mein Fuhrer.”

Sellers initially agreed to play a fourth role, that of B-52 pilot Major King Kong. During rehearsals, Sellers and Kubrick were seated in a plane suspended 15 feet off the ground. Sellers fell out of the plane and broke his leg. Kubrick had to recast Major Kong. He turned to Slim Pickens, a character actor he’d seen in the Marlon Brando film One-Eyed Jacks. When Pickens arrived on set, he wore a cowboy hat, fringed jacket and weathered cowboy boots. The crew assumed he’d come in costume not realizing this was how Pickens always dressed. The final scene of Pickens riding the nuclear bomb toward Russia remains the most iconic image in the film.

George C. Scott was cast as General Buck Turgidson. The part was loosely based on hawkish, anti-Communist General Curtis LeMay. Scott, known for his volatility and heavy drinking, initially resisted Kubrick’s urgings to play the role for laughs. After Kubrick destroyed him in several games of chess, Scott relented. General Turgidson is stuck in perpetual adolescence, pouting when scolded by the president and taking calls from his mistress while he’s in the War Room.  He is always the optimist as when he voices his opinion about nuclear war. “I’m not saying we wouldn’t get our hair mussed.  But I am saying no more than 10 to 20 million killed, depending on the breaks.”

Production on Dr. Strangelove was completed in spring 1963. The original climax to the film featured an epic pie fight in the War Room. Kubrick removed the scene fearing the farcical aspect would undermine the film’s satirical tone. The first test screening was scheduled for November 22, 1963, the day JFK was assassinated. The film was delayed until January 1964. Because of the tragedy, one line of dialogue had to be changed. When Slim Pickens says, “A fellow could have a pretty good weekend in Dallas with that stuff” the line is redubbed as “Vegas.”

The film was a box office and critical success. Theaters promoted it by giving away pocket radioactivity detectors. The movie ultimately received four Academy Award nominations including Best Picture and Best Screenplay. AFI called the movie the #3 comedy of all time behind Some Like It Hot and Tootsie. In 1980, when Ronald Reagan became President, he asked to see the White House War Room. His Chief of Staff had to tell him no actual War Room ever existed.