Is Anybody Still Awake?

Jarmusch’s newest film, Only Lovers Left Alive, is an embarrassment. 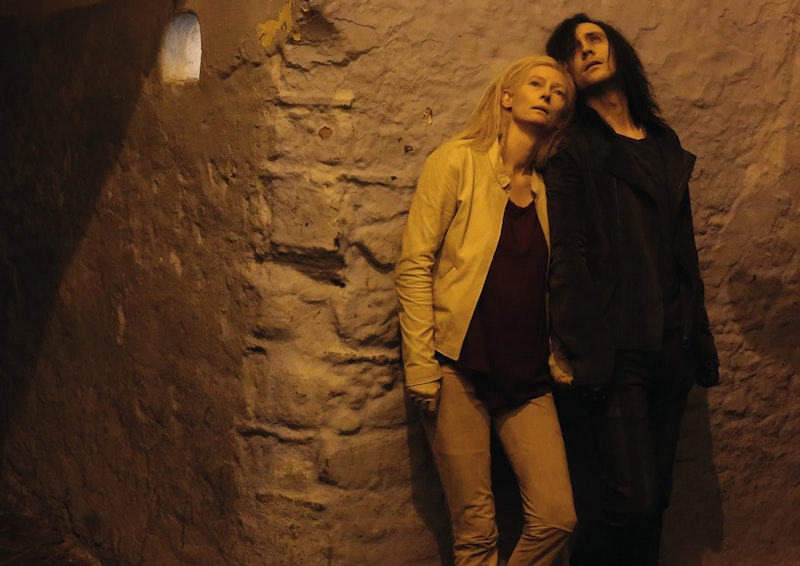 Jim Jarmusch’s 11th film, Only Lovers Left Alive, is a real lemon, one of the worst movies I’ve seen in a long time. After watching it on Sunday, I felt a little bitter and annoyed, lamenting that I’d just wasted two hours. But Only Lovers Left Alive was confusingly bad in every way: the premise is half a thought, there is nothing beyond what is contained in the trailer, and embarrassingly, it thinks it’s cooler, smarter, and sexier than it is by a monstrous margin. Most of Jarmusch’s movies are fantastic, but here his effortless cool is just bad, melted wax. It’s frustrating to learn that he spent nearly seven years in development on such a lifeless and legless film. Only Lovers Left Alive is the cinematic equivalent of a plastic pair of Ray Bans.

The film is riddled with confounding clichés and has nothing to say. We watch two hopelessly hip vampires make small talk and mope for two hours. The vampire lovers are named... Adam and Eve (Tom Hiddleston and Tilda Swinton). He’s a reclusive rocker hiding out in desolate Detroit, spending his nights drinking Type O Negative blood and recording dark instrumental garage rock in his cluttered apartment. She lounges in Tangier with an especially good blood connect played by John Hurt. Adam and Eve have been carrying on a long distance relationship for centuries apparently, and she flies to Detroit to visit him, where Adam’s got his own excellent blood connect (by bribing a doctor named... Watson).

One thing I learned is that vampires are serious packrats, and they can read books with their fingers. Most scenes consist of Adam and Eve making deadpan hints about their immortality to “zombies” (regular people) and namedropping famous figures they’ve known and interacted with (Adam saw Eddie Cochran play live and ghostwrote music for Schubert, while Eve has been alive long enough to have seen the Middle Ages, “the inquisitions,” plagues, all sorts of terror. They talk about Tesla and how misunderstood and mistreated he was. It’s suggested that Adam had a major profile and career as a rock musician at some point, explaining his reclusiveness and the kids that hang outside his house all night. Nothing about his public life, music, or legacy are explained. We see the world through the eyes and ears of Adam and Eve: hopelessly droll, with nothing to say, junked out and nodding off on good blood in their hoarder caves.

Only Lovers Left Alive doesn’t have any forward motion and its focus is territory as common as Coke—it’s all about the atmosphere and style, and it falls flat, totally paper-thin. After 10 minutes, you get it: these are vampires, they’ve been alive for centuries, they’re wearing clothes from the 18th century, they met all these famous historical figures, isn’t that cool? End movie. Even in a film where nothing happens, the stakes are surprisingly low. We also never get under the surface of Adam or Eve, and so many ideas and points are brought up in a scene or two and forgotten, like Adam’s “suicide romanticism,” shown by his order of a custom wooden bullet. He mopes around like Jared Leto in 30 Seconds to Mars mode, wishing he were a sad Cobain. They’re vampire dilettantes, haunted hipsters, feeding/getting high in seclusion and mumbling about their Zelig-like adventures through history. None of these stories or anecdotes go beyond “oh, ha, they were alive then, damn.” Another incredibly annoying running joke is their use of the most obvious assumed names you could think of: Faust, Fibonacci, Dedalus, etc. Which shows that they’re well read, I guess. They’re still punishingly boring. Only Lovers Left Alive will suck the life out of anyone who comes in contact with it.