Eleven Fictional Characters I Wanted To Be

Television and movie heroines of the 1970s-80s. 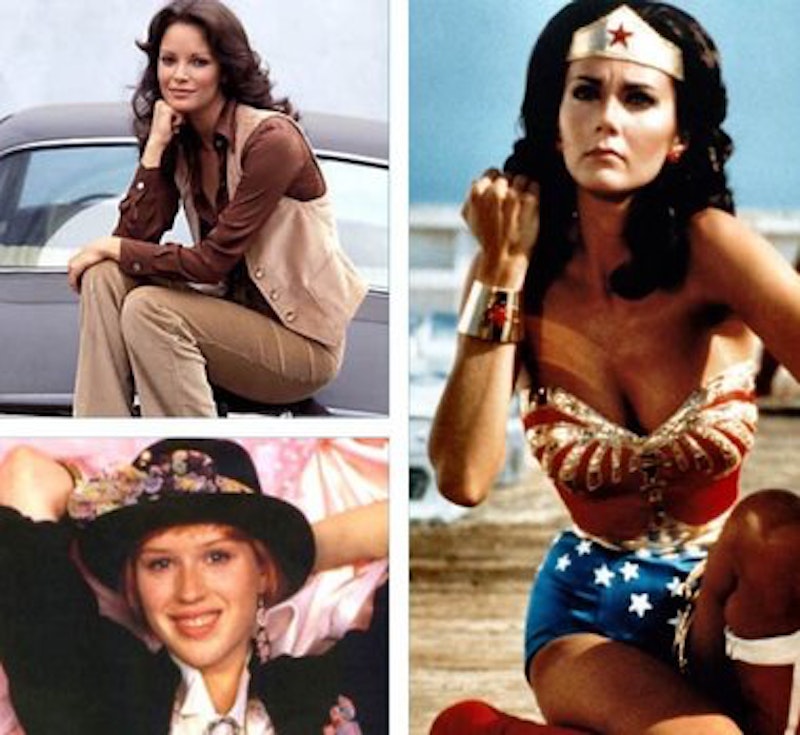 If you grew up in the late 1970s and 80s, as I did, you probably had a few TV or movie fictional characters you wish you’d been in real life. Maybe you wanted to be Mr. Roarke from Fantasy Island, Elliott from E.T. The Extra Terrestrial, Magnum P.I., Marty McFly traveling back in time in Back to the Future or the guys from Miami Vice or Dukes of Hazzard. Maybe you wish you’d been JR from Dallas so that millions of people would be wearing your “Who Shot JR?” t-shirt, or that you’d been as much of a badass as John Bender from The Breakfast Club.

Wouldn’t it have been cool to be:

Andrea Thomas (JoAnna Cameron) /Isis in The Secrets of Isis. It was only on for two seasons, but they were fantastic and they gave us television’s very first female superhero. Isis was supremely cool. A high school science teacher who turns into an Egyptian Goddess when she uses her magical amulet? Yes.

Maddie Hayes (Cybill Shepherd) from Moonlighting. I’m not saying I wanted more than anything during high school to be Maddie Hayes because she got to make out with Bruce Willis, if I had been her, I would’ve done a hell of a lot more of it and chilled out and had fun once in awhile, too. She was too uptight. I just wanted to be her so I could be her better.

Jaime Summers (Lindsay Wagner) The Bionic Woman. Forget the Six Million Dollar Man. They took a piece of his electronic rib and, just like the Ms. Pac Mac arcade game was better than the Pac Man arcade game (randomized ghosts, hello)—made the girl version better. She is woman—hear her roar, or at least make ch-ch-ch sounds when she runs. Who doesn’t want to be bionic? The calories you could burn running 60 miles an hour alone.

Everyone Molly Ringwald Ever Played. John Hughes crowned her as the queen of the 80s rom-com by placing her at the throne of the holy trifecta of 80s movies: The Breakfast Club, Pretty in Pink and Sixteen Candles. Who in the 80s didn’t want to be her in at least one if not all three of those movies? She was the personification of the middle to upper-middle class 80s white girl: from her eye rolls to her blush lip gloss to her whiny drama, she was all of us.

Julie McCoy (Lauren Tewes) from The Love Boat. There was a lot going on at sea on the star-crossed voyages of The Love Boat. Julie dealt with the gruff style of the bald Captain Steubing, the mischief of his annoying daughter Vicki, and the joking zaniness of Doc, Gopher and Isaac the bartender with much aplomb as she navigated the stormy seas of cruise ship directing. What a cool job that would be, I thought.

All Three Charlie’s Angels. As late 70s-early 80s girls, we were pretty much legally required to play Charlie’s Angels with our friends. Which angel (Kate Jackson, Farrah Fawcett, or Jaclyn Smith) you played usually came down to hair color. I wanted to be Kelly (Jaclyn Smith) the most because I thought she was simultaneously smart/pretty/totally badass. Any combination of three fortysomething women and alcohol will usually result in a drunken photo mimicking the classic three-gun silhouette pose of the angels.

Katherine Chancellor (RIP Jeanne Cooper; she died the exact day of the show’s 40th anniversary) from Young and the Restless. I wasn’t allowed to watch Y&R at home, but I could walk to my grandmother’s apartment where she drank Scotch and watched it (obviously far more fun). Mrs. Chancellor reminded me of a rich version of my grandmother—she didn’t take shit from anyone and did as she pleased, usually while holding a tumbler glass complete with tinkling square ice cubes. Not a bad life.

Jo (Nancy McKeon) from The Facts of Life. Here was a show about a ritzy all-girls boarding school, and along comes a poor girl from the Bronx who has to work in the cafeteria and “on scholarship,” living in a room next to the housemother. I loved it. Her sardonic and colorful opinions of the snotty rich girls (especially the ever-cunty Blair) won me over and I thought for sure she was the coolest character on TV.

Julie Richman (Deborah Foreman) in Valley Girl. My eighth grade locker was an altar to all things Valley Girl. I am so fer sure you could see the “Gag Me With a Spoon,” “Grody to the Max” and “Totally Bitchin” magnets from halfway down to Sister Rose Frances’ math room. The movie, a loose translation of Romeo and Juliet, believe it or not, was everything. Being the preppy girl who lands the (so-hot Nicolas Cage) bad boy punk was every girl’s 80s dream.

Diana Prince (Lynda Carter) as Wonder Woman. The rest of these characters weren’t ranked in any particular order, but this one is my number-one fictional character fantasy. It’s not just her sex appeal and fashion (Those boots! That star-spangled outfit! The accessories!), it’s her power. She’s an Amazon princess who can deflect bullets with her jewelry, force people to tell the truth with her golden lasso, and only has to spin to look fabulous. Also? Two words: invisible plane.