Game of Thrones' Not So Shocking Rape Scene 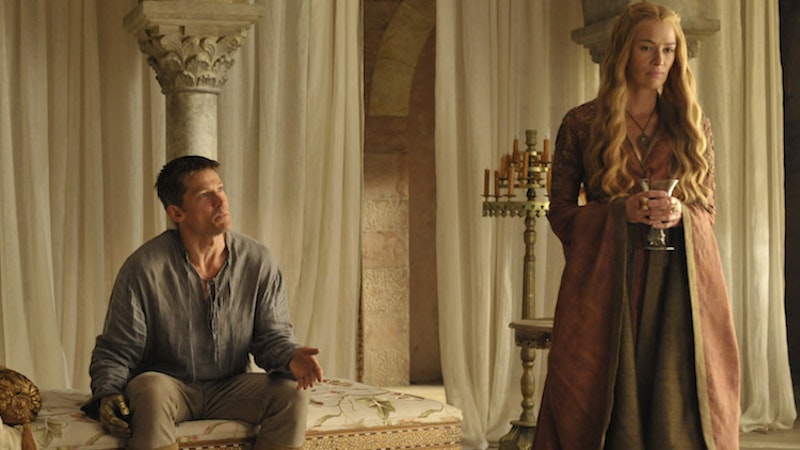 Only a few episodes in to Game of Thrones’ fourth season and already the show has outraged fans again—this time though it’s no execution of Ned Stark or Red Wedding, but a questionable rape scene involving Jaime Lannister and his sister Cersei, in a holy sept where their dead son King Joffrey lay, one of three kids Cersei had born from their incestuous affairs. Endless deconstruction followed. Was this, in fact, rape? Fans of the books argued comparative analysis with the original scene. In A Storm of Swords, Cersei wants to have sex (even George R.R. Martin said as much):

Why then had producers made the TV version so violent? Never mind that GoT is one of the most violent TV shows ever aired, with pregnant women stabbed in the belly, for example, or all of season three's torture porn plot involving Theon Greyjoy—hell, last night's episode featured the Night's Watch mutineers at Craster's Keep raping all of Craster's daughters, with Karl yelling, "Rape them till they're dead!" So what sets the Jaime/Cersei scene apart then? Director Alex Graves’ ill-considered comments post-airing obviously didn't help, saying that the sex "became consensual by the end." Or maybe it's that Jaime has turned into one of the show's most popular characters, and this cuts against the redemption arc that executive producers David Benioff and D.B. Weiss have set him on. Alan Sepinwall argued as much in his most GoT write-up:

But all the other scenes featuring Jaime this week... played exactly as they would if no one expected the audience to now look at Jaime as someone whose uphill climb in morality took a steep plummet the week before... Television shows are living organisms. They change and evolve based on what's working and what isn't, based on what actors are available, what locations are usable, and based on how the audience is reacting to things. But there are also times where a substantial chunk of the work—like this season—is done before the creators have any chance to react to the reaction, and so there may be six more episodes of them writing one version of Jaime while the audience has another version of him in their heads.

Still, this far into the show, after the Red Wedding and everything else, I'm not sure I expect anything from GoT anymore. Of course Jaime raped his sister, because on GoT all the worst things happen all the time. Fans rave about how morally complicated the show is—a total reworking of medieval lit and fantasy tropes—but maybe it's just too bleak. "Shocking" was the general consensus—from Salon to E! Online—but really, was anyone shocked at all?