On a Dead Saturday Afternoon, Watch Sabotage on Cable

This movie is like the Incredible Hulk on cocaine. 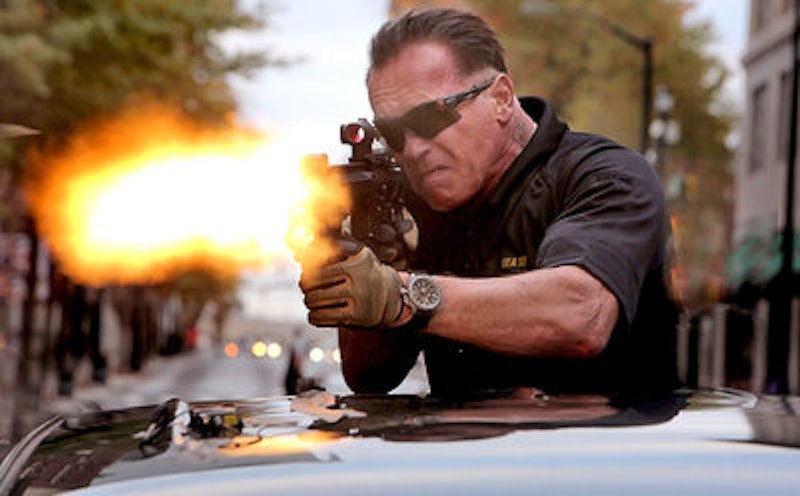 Sabotage is all about the trash talk. It’s everywhere: slung lewdly among members of an elite squad of DEA commandos, crackling between bantering detectives, exchanged by weary agents on a stakeout. At moments, in the early going especially, I wished that was all this movie was concerned with, on-the-court NBA style.

No such luck. Turns out, this thing has a plot, after all, that resembles a huge hunk of Swiss cheese, its holes dripping gore. Sabotage is cool with all that gore, unabashedly unafraid to contemplate it for what feels like hours at a time: bodies blasted to Hell and back by automatic weapons fire, pulped shockingly, nailed violently to ceilings. A lot of people meet sudden, violent ends—all in the name of money. This movie both challenges plausibility and is impossible to encapsulate without spoiling; as such, it’s critic-proof and destined to have you and whomever you saw it with trying your damnedest to plug up all the holes in that Swiss cheese hunk.

Arnold Schwarzenegger stars as the leader of a gang of DEA commandos whose family was murdered by a drug cartel, but only nominally. In actuality, Schwarzenegger successfully interrogates the very notion of what an Arnold Schwarzenegger protagonist should represent to the movie-going public. Via the conventional wisdom, we commonly associate the Schwarzenegger ideal with blunt precision, wisecracks, ass-kicking, cigar-smoking, and a sort of Cro-Magnon nobility.

But what if—for one movie, anyway—all of that were total bullshit? What if Schwarzenegger-cum-avatar flat out isn’t the best at what he does, or doesn’t necessarily have the best interests of those who depend on him at heart? What if the other people following him blindly into the flames of Hell are idiots, or psychologically lost and damaged enough not to know better?

It isn’t necessary to care about this idea to enjoy Sabotage, where the aforementioned commandos rip off a pile of dirty cash from a cartel, then someone rips off what they ripped off, while the large DEA insists that the commandos actually ripped the agency off; none of it makes any sense, but it doesn’t much matter.

The debacle results in Schwarzenegger’s character being forced to ride a desk until, in traditional movie logic, his boss (Martin Donovan, slimily cashing a check) shrugs his shoulders and allows the disgraced ex-commander to get the band back together. The band consists of a bunch of abject fuck-ups—Mireille Enos is most memorable as a sinewy, wasteoid minx, while Terrence Howard’s presence is out-and-out pointless—who our hero must whip back into fighting shape while managing relationships bruised by the question of where all those ducats went off to.

Just when all seems to be well in mercenary land, somebody starts knocking off members of the team in increasingly gruesome ways. This seems to be the work of Mexican gangs—convenient enough for a flick like this—and paranoia sets nicely. From here forward, Sabotage is content to fly forward, jagged and invulnerable, like the Incredible Hulk on cocaine.

The audience’s surrogate—Olivia Williams, a homicide detective investigating the bodies as they pile up—effectively steals the movie by being as steely and composed as the commandos are (seemingly) psychopathic and in utter and total disarray; Harold Perrineau tags along as her hapless partner, but I spent half the movie waiting for him to emerge a remorseless, bought-and-paid-for cartel puppet, sort of like David Oyelowo in Jack Reacher. Like everybody else in this movie, though, they talk great shit together, and a weird part of me hopes the screenwriter and director rope everybody involved back in for a Coffee & Cigarettes-style, loosely plotted roundelay dedicated, exclusively, to the gratuitous talking of smack. That would be fabulous, and fail—unlike the slightly above-grade Sabotage, which is mostly a solid way to kill a Saturday afternoon watching cable if you didn’t have any other plans—to recoup expenses. Also, in case you forgot, Arnold Schwarzenegger is old.