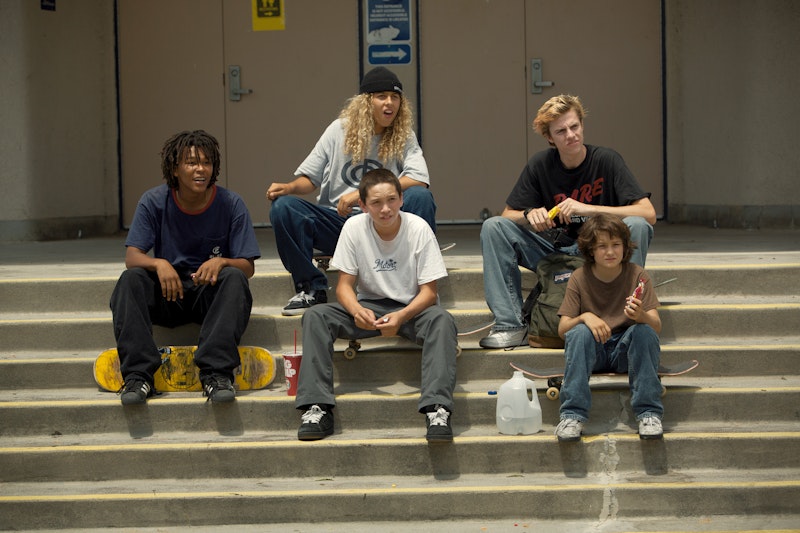 The bonds of brotherhood are too often sanitized for the silver screen. Steamed of their most pungent odors, even the best onscreen depictions of brotherhood sentimentalize more than necessary, often at the expense of the more subtle and less savory aspects of fraternal bonding—especially when confined to the early years of adolescence. This is galling, and a little sexist, given the barbed and capricious bonds of so many screen sisters (from Hollywood shlock like America’s Sweethearts and In Her Shoes to arthouse/indie fare like Fat Girl and Margot at the Wedding), the implication that brothers fight like boys (with their fists) while sisters fight like girls (with duplicitous mind games and other heavily female-coded behaviors). Among the many endearing qualities of Jonah Hill’s directorial debut mid90s is its willingness to confound these expectations, depicting early brotherhood as a sadomasochistic contest of cool.

The film’s titular time setting—a cultural moment in which any coherent definition of “cool” had irrevocably splintered into hundreds of balkanized subcultures, whose ideas and aesthetics often clashed—gives said contest its poignant edge. It’s in this cultural moment that we meet Stevie (Sunny Suljic), a young, doe-eyed middle schooler, getting pummeled by his older brother Ian (Lucas Hedges). In the next scene, Stevie raids Ian’s room, ostensibly to help buy him a graduation present but also to marvel at his big brother’s immaculately kept possessions: fitted baseball caps hanging from the wall, shelves lined with alphabetized rap CDs and taped-off-the-radio Stretch and Bobbito cassettes, labelled and ordered by date. Stevie takes notes, writing out names like Fat Joe on a yellow pad, studying how to be cool—the least cool thing possible. He tries on one of Ian’s hats and addresses the mirror: Wassup. This scene, and much of the film that follows, recalls the classic Simpsons episode “Summer of 4 ft 2,” in which Lisa enrages Bart by befriending older skater kids while on vacation (Stevie’s practice wassup is the natural macho analogue to Lisa’s like, y’know, whatever).

At a Chinese restaurant, Ian silently opens Stevie’s present (The Pharcyde’s sophomore album Labcabincalifornia) and says nothing. Hill closes up on a slowly expanding wad of crumpled wrapping paper, which might just as well be Stevie, his rejected offering made all the more brutal by Seal’s “Kiss from a Rose” playing low in the background (omnipresent in years 1995-96). Ian’s hostile display sets the events into motion, as Stevie abandons his brother and befriends the more accepting fraternity of skaters at Motor skate shop (based on the L.A. skate shop Hot Rod).

The band of skaters, especially its leader Ray (Na-Kel Smith), are as accepting and loving of Stevie (nicknaming him Sunburn) as Ian is resentful. But Stevie’s lack of a board demands that he play nice with his brother: he offers to trade Ian anything in his room for his old school, giant-wheeled skateboard. Ian asks for Stevie’s discman, an unfair exchange; when Stevie points out that he uses his discman all the time—unlike Ian’s skateboard, which looks like it’s been in the garage since the 1980s—Ian starts to storm off, attempting to call his bluff. “Anything in my room except the discman!” Stevie pleads, his pubescent voice cracking in desperation.

Stevie gets his way, but the old-school Kmart board isn’t adequate in practice or appearance. Ruben (Gio Galicia) offers to sell Stevie his old board for 40 bucks. Once again, Stevie goes to his brother for a favor, and Ian dangles a proposition almost as torturous as giving up his discman: steal $80 from their mother (Katherine Waterston), give half to Ian and keep the other half. Stevie goes along with the plan, administering his atonement with a hairbrush to the thigh (one of several painful punishments Stevie self-inflicts in the short film). But like any sub worth his weight, Stevie holds all the power, never more obvious than when his mother confronts him about the stolen money. Stevie denies Ian’s claim that they stole the money together, which his mom buys. Hill’s camera dwarfs Suljic in almost every frame of the film, but especially here, as if to bolster his presumed innocence: who is she really going to believe, the cute little kid or the tall white boy in a gold necklace? This deception marks an inflection point in the film, the moment in which Stevie “breaks bad,” but more importantly, the moment in which he begins to eclipse Ian’s cool, a progressive upstaging that’ll continue for the remainder of the film.

Outside a fast food joint a few scenes later, Stevie and his friends run into Ian: Fuckshit (Olan Prenatt) attempts a trick on the sidewalk and his board slams into Ian’s leg, commencing a standoff between the impassive Ian and the boisterous, n-word hurling Fuckshit. Ian makes eye contact with Stevie, who says nothing, before backing down and walking away in defeat. In the next scene, the two play video games as one of their mother’s dates makes a hurried exit (a blink and you’ll miss it cameo by OG skater auteur Harmony Korine); Ian attempts to regain some ground by torturing Stevie with the details of their mom’s former promiscuity (“fucking sounds”), but Stevie remains stolid, refusing to take the bait.

Ian defends his refusal to fight Fuckshit on the grounds that he was solo and outnumbered. Does he have any friends to back him up? While never definitively answered, Ian reads as emotionally troubled in ways that might alienate his peers, with his OCD-case bedroom and macho posturing, embellished with staples of 1990s hip-hop fashion—Timbs, oversized Polos, gold chains—that feel oddly out of step with the film’s SoCal setting. When Stevie returns home drunk after a party (and his first sexual experience), Ian confronts him. “You’re fucking up, Stevie!” he yells, his rage at his younger brother (fueled less by genuine concern than jealousy, one suspects) only worsened by Stevie’s drunken laughter, underscoring a newfound refusal to respect Ian’s seniority. Stevie dresses him down: “You’re a pathetic lonely f****t. You have no fucking friends. You get no fucking pussy!” Ian chases and tackles Stevie, dominating him in the only way he has left: his fists. But when Stevie finally scurries away to his room, Ian lets out an almost feral cry and covers his face with his t-shirt, bested again.

Hill devotes the remainder of the film to Stevie’s continued slide into skater delinquency, culminating in an alcohol-fueled skate demo in the Motor backlot, its bleak party’s over vibes foreshadowing the film’s laziest narrative contrivance: a DUI-accident in Fuckshit’s SUV. Stevie wakes up in a hospital bed, Ian sitting beside him. While Stevie comes to, the camera lingers on Ian, his lips pursed with worry. He nudges Stevie, producing a bottle of orange juice from each of his cavernous front jean pockets, opening one and giving it to Stevie. Hill follows this with another scene in which Ray and the guys visit Stevie. Fourth Grade (Ryder McLaughlin) plugs his camcorder into the TV and plays a short, self-produced skate video of the gang titled mid90s, the film’s coda before the end credits. For me, though, the real ending is in the orange juice. One more token of brotherly love shared in bittersweet silence.