Abel Ferrara’s Zeros and Ones is the first compelling “COVID movie” that works on its own. 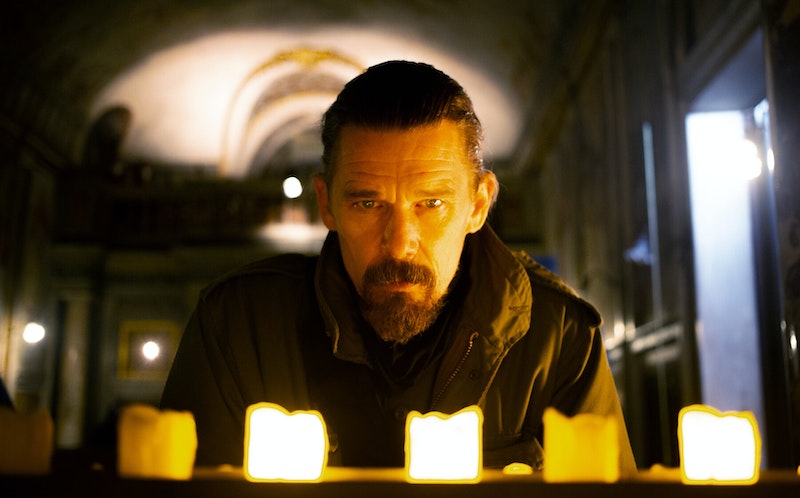 One of the mantras that surprised me the most in the past 21 months was that a) no one wanted to see a “COVID movie” any time soon, if ever, and b) “the perfect COVID movie,” let alone a good one, will never be made. I agree with the first point, especially since the pandemic is still happening, but this is an unprecedented global catastrophe that we’ve all been living through. It’s crazy to think that this period won’t become fodder for art and entertainment for decades to come, just as both World Wars, Vietnam and the Cold War resulted in stacks upon stacks of films, books, recordings, and television programs. The Great Recession in particular and the specifics of the global economic crash in 2008 have spawned an enormous amount of media, from films like The Big Short and Margin Call among many, many others, and an endless list of books.

9/11 is curiously underrepresented in popular cinema and fiction; even though the event itself and the aftermath really didn’t effect most of the country, stock market crashes and men at war are still easier to take than terrorist attacking civilian buildings. But more than that, the footage of the attacks is already cinematic (recall how many people said “it looks just like a movie”), and any attempt to dramatize it will always fall short or risk obscenity, as with dramatic depictions of the Holocaust.

Abel Ferrara’s Zeros and Ones is the first “COVID movie” I’ve seen: masks, hand sanitizer, small groups, videophones, temperature guns, and Hazmat suits. Ethan Hawke plays “JJ,” an American mercenary working for… who knows. Himself, as always, but as Hawke says at the beginning of the film, in an out-of-character introduction, “We don’t know whether or not he’s a good guy or a bad guy,” or who he’s working for. But he’s in Rome, he walks like a soldier, he’s got a gun, and he’s clearly on a mission. In an early scene, he visits a loved one (friend, lover, relative, ex-wife, it’s never made clear), and without a word, she stops him at the door, his graying hair tied back in a tight ponytail, face covered by a black cloth mask. She reaches into a box of surgical masks, gives him one, and they kiss each other on each cheek—very slowly, and very carefully. There’s a baby in the room. JJ leaves without saying much, like almost all of his encounters.

Variations on the phrase “Don’t worry, he’s negative” or “We’re all negative, relax” recur, and it’s always in dangerous circumstances: JJ is a man of few words, and because of the pandemic and the nature of his work, Rome’s seen only at night. It is always dark, and everyone is possibly evil, sick and armed with a machine gun. Late in the film, JJ is accosted by two women with guns that force him into sexual blackmail, and that eventually gets his friend and contact killed. Everything in Ferrara’s script—although in the closing out-of-character video from Hawke, he says that a “script” was “not a good description of what he sent me.” JJ is a nameless mercenary, and hardly anything is explained in the film. Zeros and Ones is a much more successful attempt at the elision of exposition than Joseph Losey’s Figures in a Landscape, or even Sam Peckinpah’s Junior Bonner, which does work, albeit in a different register.

Zeros and Ones is also a “response film” as much as it is a “political thriller” or an experiment—remember, the poster only looks like that because it sells—and because we’ve all lived through the pandemic, we don’t need exposition. The audience also doesn’t need much fleshing out of a routine spy story—who cares? Could I tell you why JJ gets injected with a turkey baster full of LSD and goes on a rant about our “eroding country” and “eroding planet” while shirtless and surrounded by angry mobsters? No, but it’s a fantastic scene that captures the splenetic, incomplete terror of the world since March 2020. It’s a film that’s necessarily vague, mysterious, and brief because we aren’t done yet—with the media and the world’s governments pumping Omicron fear, there’s no end in sight.

Ethan Hawke’s out-of-character bookends to the film—the first made before shooting as a way to raise money, the second immediately after Hawke watched the completed film for the first time—provide a warmth and intimacy in a film otherwise devoid of hope, light, health, or life prospering. All we see are money, drugs, guns, and scared people. Drug dealers weigh out their powder while sanitizing and wiping down the bills JJ hands them. Russian gangsters brag about “being negative.” Hawke’s videos appear after the initial opening credits, and end before the final credits, and he makes it clear at the end that, “this video is part of the movie, and now it’s over.”

Zeros and Ones is not the COVID movie, it is a COVID movie, and one that works on its own as a film (it’s never as boring as Figures in a Landscape). For people that dismiss the idea that this can be done, Ferrara has proven them wrong. Zeros and Ones is a vivid and dark vision of the pandemic that never feels hackneyed or forced. For the first time, you see what it can be like, and how it can be done. If you can hook people in with the right mood, you can become explosive—there will be a film, book, or TV show that rips through everyone like the wind. For the first time, I see how it could be done.