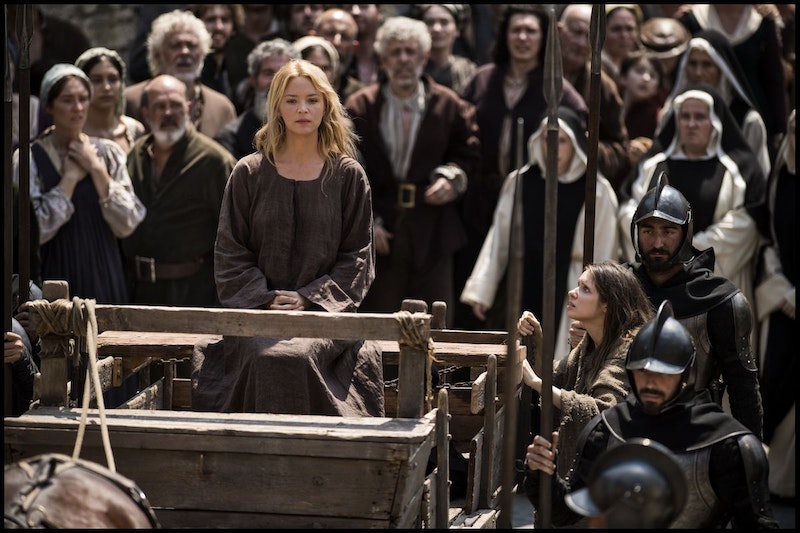 For all the Catholic protest against Paul Verhoeven’s new movie Benedetta, there isn’t that much sex in it. Some of them showed up to the New York Film Festival, and it felt like a blast from the last Bush administration. There isn’t much nudity, not only for Verhoeven but for any movie about lesbians nuns in 18th-century Italy. There’s a powerful sex scene between possible prophet Benedetta (Virginie Efira) and abused peasant turned novice Bartolomea (Daphne Patakia) featuring a modified wooden Virgin Mary, a totem from the former’s childhood, and the only possession she carried with her into the convent 18 years earlier. She and The Abbess (Charlotte Rampling) rescue Bartolomea from a father that beat and raped her (“The plague took my mother last year. Then he took me as his wife.”). She runs into the convent with her monster father pulling her out, and after the Abbess’ initial rejection without a dowry (“This is a convent, not a charity”), Benedetta makes it happen. She makes a lot of things happen.

Benedetta begins as she enters the convent a young girl, clutching her wooden Mary, already determined to spend the rest of her days there. Despite the lack of a dowry, she’s let in because she shows off her Jesus juice: after making the birds sing, everyone smiles and laughs—this one’s for real! All is forgiven. Benedetta’s given a quick introduction to nun life: her clothing is intentionally itchy and uncomfortable, and one of her mothers tells her, “You should be uncomfortable. You should never feel at home in your body.” Benedetta says nothing, and the mother goes on, showing off her wooden finger: “This is my favorite part of my body. If I could, I would make all of myself into wood.” Women imprisoned and abused “by their own volition” without any options other than walking the streets.

From the beginning, money is stressed: after Benedetta has one of her visions (Jesus is her husband, and we see Him in her visions—not bad, a catch), she’s taken to a doctor who “can’t find anything wrong” gives her poppy juice to sleep: “20 dinari.” Typical palace intrigue is avoided, too: as expected, Benedetta becomes the Mother Superior, replacing the Abbess. Even after the Abbess goes to Florence to visit the Nuncio (Lambert Wilson) and spill about the “unspeakable” affair between Benedetta and Bartolomea she saw through a keyhole. “Isn’t that a sin?” he asks. Yes, she says, but consider them. Of course they’re quickly condemned (their affair referred to as “bestiality”), and while Bartolomea is tortured with an expanding spiked dildo, Benedetta stews above and occasionally erupts into her deep-voiced God/Satan vessel mode, naturally always on the side of Benedetta.

Despite seeing visions, her stigmata (though lacking in head marks, a “crucial” detail apparently), and her spotless track record, the film keeps us at a distance, as much as the other characters, as to whether or not Benedetta is for real. We see her visions of Jesus, but so what? Okay, she’s gushing blood from her palms out of her nowhere, looks like stigmata. Honestly, I’d get behind Benedetta and ride it out (the end credits clarify that their village of Pescia was the only one spared of the plague during that epidemic).

Benedetta arrives in American movie theaters nearly two years into the coronavirus pandemic, but it was shot over three years ago, so its plague material is free of topical spoiling. Not that Verhoeven would ever bother, but the film’s also a reminder of how people react in a plague: like rats. Just like everyone keeps biting and eating each other—men and women—people who carry the plague (like the Florentines, who infect the Abbess) panic, hide and don’t want anyone to know and don’t tell anyone. This is our animal behavior, bug-about-to-be-smashed instincts: most of us would do anything. Bartolomea confesses after the expanding metal dildo does its work. The specter of the plague and the plague itself quickly reveals the Nuncio as a nonce, and he’s gloriously dethroned and beaten by an angry crowd who finally come around on Benedetta.

After the Abbess and the Nuncio die in Pescia, Benedetta and Bartolomea are spared. But Benedetta must go back, and rather than make love in the French countryside for the rest of her days with her heaven-sent love, she chooses to live out her life in shame in Pescia, where she’s sometimes granted the privilege of eating with the other women on the convent, but on the floor, like an animal, which she’ll always be. Vessel of God or not, she still got fucked by a wooden statue of the Virgin Mary—people in Pescia don’t forget that.

Verhoeven responded to Catholic criticism at Cannes in May: “I do not understand really how you can be blasphemous about something that happened. You cannot basically change history after the fact. You can talk about that was wrong or not, but you cannot change history. I think the word blasphemy for me in this case is stupid.” Even more mystifying is criticism like this, from the AP’s Mark Kennedy: “The exploitative Benedetta seems to want to poke at religious hypocrisy but it actually reveals the filmmaker's: How does it help his mission exposing a corrupt system to show a horrific torture scene with a stripped-naked nun? There is perhaps an intriguing movie here somewhere—‘Who decides what is God’s will?’ is one lingering question—but to find it you have to slice away all the bawdy and ultra-violent excesses that are clearly intended to push buttons, like a 5-year-old testing her parents’ patience. Yawn.”

For one thing, that “intriguing” movie about who decides God’s will is here. Kennedy also misuses “exploitative”—contradicting himself a paragraph after admitting Verhoeven has “never been subtle” in his approach. Benedetta is a pulpy, sleazy, exploitation-adjacent movie just like Basic Instinct, Showgirls, Elle, Starship Troopers, and RoboCop. As for the depiction of torture, I think it’s important to record our triumphs and failures, and Verhoeven’s depiction of the suffering of these women is far from “exploitative,” even if the film is “bawdy” (my word!). Don’t you think there are enough boring and staid period pieces and nun movies already? Benedetta also isn’t nunsploitation, and like all of Verhoeven’s films, it’ll get its due and recognition from critics like Kennedy who dismissed it a decade earlier.

Kennedy’s dismissive comments comparing Verhoeven to a five-year-old testing the patience of his parents is too stupid to merit further evisceration.

Benedetta is a powerful film, precisely because its violence and sex isn’t excessive. This is how these dull period pieces should be done: with horrendous CGI comets, full frontal, lots of blood, and horrible acts and images. Because that’s reality.