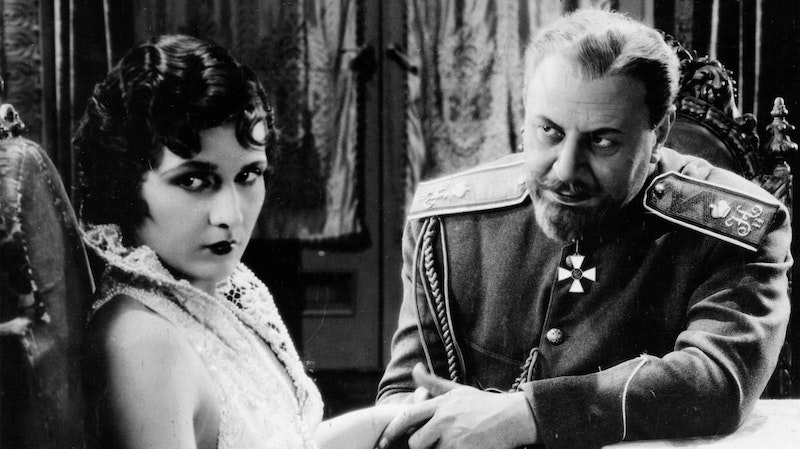 One could say that Josef von Sternberg’s second major film, The Last Command (1928), is mainly about the great performance by Emil Jannings. This wouldn’t be wrong. Jannings’ mere presence is mountainous. But, as usual, von Sternberg’s visual choices stand out, and are on the same level with Jannings’ imposing nature and over-the-top theatricality.

The Last Command plays with the chronology of the plot. It opens with a statement that turns out to be both comic and tragic: “Hollywood—1928! The Magic Empire of the Twentieth Century! The Mecca of the World!” A film director (William Powell) is sifting through a pile of photographs to find a good actor for the role of a Russian general. The story of the film within the film is about the Russian revolution, which turns out to be the story of the film itself, told in a long flashback.

The director focuses on a photograph of one man—Sergius Alexander (Emil Jannings) who’s available for hire, just like the masses that are standing in line at the film studio, waiting for their “bread” so to speak. The director, who was a former revolutionary in Russia, recognizes Sergius Alexander as a real Russian general in the employ of the Czar. Both have made it to the shores of America.

The general shows the card at the studio gates that allows him to report to the set. Von Sternberg’s focus on the faces of the masses, as they attempt to find their place on the correct film set, is intense and visually disorienting. It’s madness and chaos, and everyone involved is treated like cattle, all in an effort to make more money. The general’s outfitted into his costume, which is practically the same as his uniform during the war. Everything feels familiar to him, yet somehow divorced from reality.

Jannings had that quality that induces both dignity and lack of it, and as he’s putting on make-up to get ready for the scene, he gazes at himself in the mirror, sad and confused. Nobody recognizes the significance of his stature that comes from the past life, and other extras in the room mock him. This kind of humiliation will be exaggerated in von Sternberg’s The Blue Angel (1930), in which Jannings plays a gymnasium professor who allowed himself to become a clown because of his love for Lola Lola (Marlene Dietrich).

The general’s surrounded by fools who couldn’t care less about his high standing before America—a familiar feeling for many immigrants. As he applies make-up to essentially engage in fakery and mockery of his identity, he begins to cry. The brief reflection (both literally and figuratively) provides an opening to go back in time, and see who Sergius Alexander really was.

The reign of the Czar is coming to an end thanks to the revolutionaries that are agitating the political situation. The general’s enjoying his life of comfort and wealth (Jannings’ plumpness certainly exudes pleasure in food), when his paths cross with two revolutionaries—the film director at the beginning of the film and Natalie (Evelyn Brent). He falls in love with Natalie, and although it appears as if she’s just a prisoner of the general, she falls in love with him too, but for very strange reasons—she can’t hate anyone who loves Russia that much, implying that they’re not that much different from one another. It’s Natalie who ends up saving the general’s life from the violent and angry mob, while she plunges into her own death.

The film within the film appears to be exactly the same film that we’ve just watched, that is, the same experience that the general has lived through. Now, at the film director/former revolutionary’s tyrannical insistence, the general’s forced to relive the scene of his life. Except in this case, the general sees the ghosts of the past, and loses a grip on reality, until finally, theatrically, he accepts the inevitable end. But for the general, this wasn’t a question of acting but of true existence. Here, too, von Sternberg appears to be offering a commentary at the veracity of acting, and how far is the actor willing to go in order to completely give in both to the role and the director.

As much as Jannings’ overbearing presence provides one of the unique elements of the film, it’s the interplay between fact and fiction, theater and film, authenticity and inauthenticity that becomes the primary mover of this film. Right from the beginning, the extras mimic the oppressed masses in Russia living under the indifference of the Czar. The extras are the oppressed and the neglected people of the Hollywood empire. The hierarchy exists regardless of the place.

The general demands that he’s treated with dignity but his anonymity and thus, insignificance, in the eyes of the others appears comical. He never issued his “last command” as a general, and the final opportunity comes on the film set. The film director, the tyrant that he is (and something von Sternberg himself was known for), has imprisoned the general’s real self, and has muddled the realities to sadistically confuse and disorient him. Yet, ironically, he has also freed him by letting him live out the glory of a general that unfortunately, never happened. Sergius Alexander’s greatness is finally recognized as one, singular moment on the film’s set and by unlikely implication, a life’s stage. Art, which is a lie, ends up essentially showing the truth.