Being the Ricardos isn't a disaster, but it's below par for Aaron Sorkin. B- 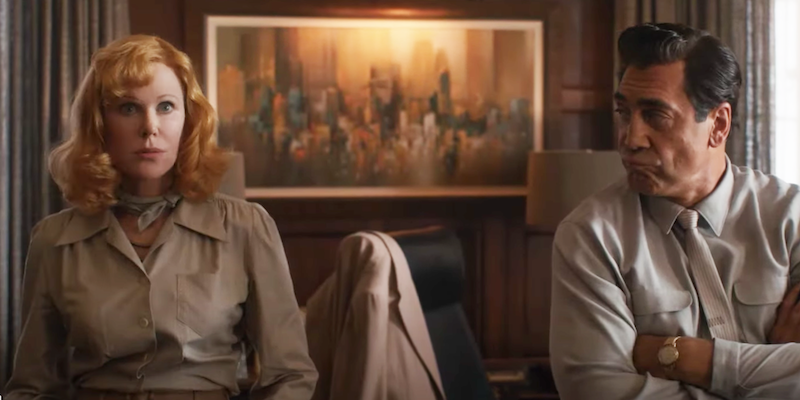 There's a scene about halfway through Being the Ricardos, the new film about a particularly contentious week in the life of Lucille Ball and Desi Arnaz, in which it clicked for me why Aaron Sorkin decided to make this movie. It's likely because he related to what he saw as Lucy's insistence on taking total control of a popular television show. If you’ve read anything about Sorkin’s The West Wing tenure, that’s a familiar impulse.

The film, which Sorkin wrote and directed, follows the production of one episode of I Love Lucy, in 1952, with numerous other events also going on: Ball named as a communist by Walter Winchell, tabloid reports about Desi's womanizing, the couple telling network brass that they're having a baby, and their then-controversial plans to incorporate her pregnancy into the show.

On the surface the film, which opens in theaters December 10 and comes to Amazon Prime December 21, is a success. It tells a compelling story from Hollywood history, and the production is handsomely mounted. It's easy to forget but Sorkin was known primarily as a writer and TV showrunner until about the last five years; between last year's Trial of the Chicago 7 and now this, he's turned out to be a pretty strong director.

Whether it's okay for the Spanish Javier Bardem to play Cuban Desi Arnaz is a thorny cultural question that I have no interest in wading into, but Bardem is dynamite in the role, while Nicole Kidman mostly nails Lucy. While Sorkin has a tendency, with a few exceptions, to make every single female character sound like the same person, he doesn't do that with Lucy. There are also a couple of standard supporting performances, from J.K. Simmons and Nina Ariendo, as the actors playing Fred and Ethel.

Even so, Being the Ricardos follows many of good and bad things that we've seen over the years form Sorkin's writing. There's dialogue delivered in the form of walk-and-talks. There are multiple levels of framing device. On the other hand, Sorkin embraces his tendency to think all problems can be solved by One Big Dramatic Speech. And as we've seen from his various projects, historical accuracy is a tiresome obstacle. Most of the events probably happened, but not in the same week.

There are glaring anachronisms. The term "showrunner," for the head producer of a TV show, wasn’t used in the 1950s, nor was "we're cooking with gas." And while the movie Gaslight, which inspired the term, came out in 1944, nobody until about 2015 used the phrase "stop gaslighting me!," a phrase used by Lucy that's out of date by more than 60 years.