The Emily Dickinson biopic A Quiet Passion is miserable. 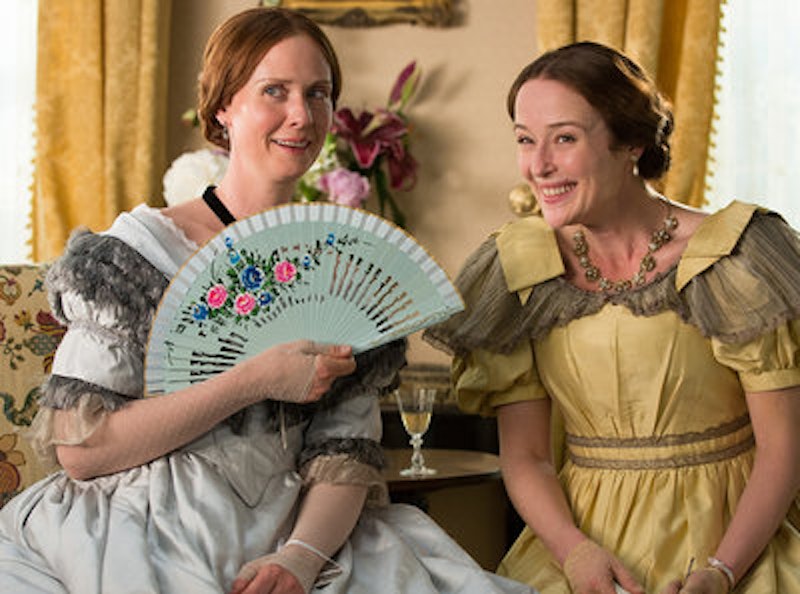 It's really a shame the way people think about art. They associate suffering with seriousness. The more it hurts, the more tightly the work focuses on madness, illness, degradation, and oppression, the more arty and hence important it is. What makes something art is that it’s to be endured, that it captures the suffering of the artist (for artists must suffer), and inflicts suffering on its audience.

Case in point: the miserable Emily Dickinson biopic A Quiet Passion, directed by Terence Davies and starring Cynthia Nixon. It’s a depiction of affliction, physical and emotional, and its message, so far as I could construe one, is that suffering is unredeemed even by poetry. That's why the film is serious, I guess. It has to be art, because it’s definitely not entertainment.

I saw it at the Charles in Baltimore. The audience skewed old, as you might imagine. But there were two teenaged girls down front who kept running in and out: as soon as they got into the hall, they started cackling at the interminable misery of both the life and the film. I overheard them on my bathroom run: “They actually expect people to pay to watch that!” I have a feeling most of the oldsters hated it too, but art makes the bourgeoisie very solemn, and very dishonest.

The film moves at a snail's pace. Davies' camera pans across a mantelpiece or even a blank wall for many seconds, and there’s nothing beautiful or meaningful in the objects or images. It's more like Davies is in the editing suite, trying to figure out how to get to two hours with the stuff that's already in the can.

I think you're supposed to worry about Nixon's Dickinson: her agoraphobia, simultaneous extreme need for a man's love and inability to seek it or accept it when offered, and her physical ailments. At the same time, her illnesses are depicted as somehow principled choices: she’s too good, has standards too high, for the world. It’s her honesty and purity that traps her in the house, and if those girls in the theater learned something from A Quiet Passion, it’s that honesty leads to misery.

The film is a kind of disease porn. It wallows in pain, delectates it, aestheticizes it. It hardly creates any emotional connection to its characters, but it does force you to watch them die. The second half of the film depicts her father's death and her mother's stroke, stretched out interminably. Mom's left-side-of-the-face paralysis and unfortunate noises constitute the character's longest scene in the film by far. That's followed by Emily's slow decline, as Nixon solemnly intones one poem after another, then suddenly grabs various parts of her body to convey pain. She has one of the longest seizures in film history, then her kidneys fail and she dies too. Then there is an interminable shot of the welcoming grave. The End. As she did herself, according to the film, I found Emily Dickinson's death a great relief, in that it presaged that the suffering was about over.

I'm thinking that the “passion” of the title refers to Christ's passion: his torture and death. The Jesus/Emily connection has been made before, and I think we can safely say: the comparison would’ve been repudiated on many grounds by Dickinson herself.

Is she really too good, too pure for the world? The world she inhabits is notably genteel, and the people by and large are very good people. Is it sexism that makes her suffer? Davies works on that for awhile, but doesn't really make it make sense. Is New England's puritanical religion the source of her misery? The film sets it up that way in a series of scenes in which she expresses a somewhat obscure religious skepticism. Why that drives her to her room, however, is equally obscure.

Dickinson lived a puzzling life; she’s a great enigma. But her verse sparkles with moments of beauty, redemption and affirmation. She has a light touch, often moving toward joy. Despite all the recitation in the film, this does not come through at all. She becomes merely an incomprehensible person and a poet of misery, and we become connoisseurs of her suffering. We pay to watch Emily Dickinson's martyrdom to art, honesty, mental illness, freedom, and physical suffering, all of which the film treats as more or less the same thing.

Perhaps it’s a badge of your social status or of the depth of your soul that you can sit through something like that, or that you can pretend to enjoy it or get something out of it, or that you didn't go see Guardians of the Galaxy 2 instead. But those girls were the only people in there with the guts to give an honest response, or trust their own sense of what was happening.

Whatever was happening, it was definitely art.