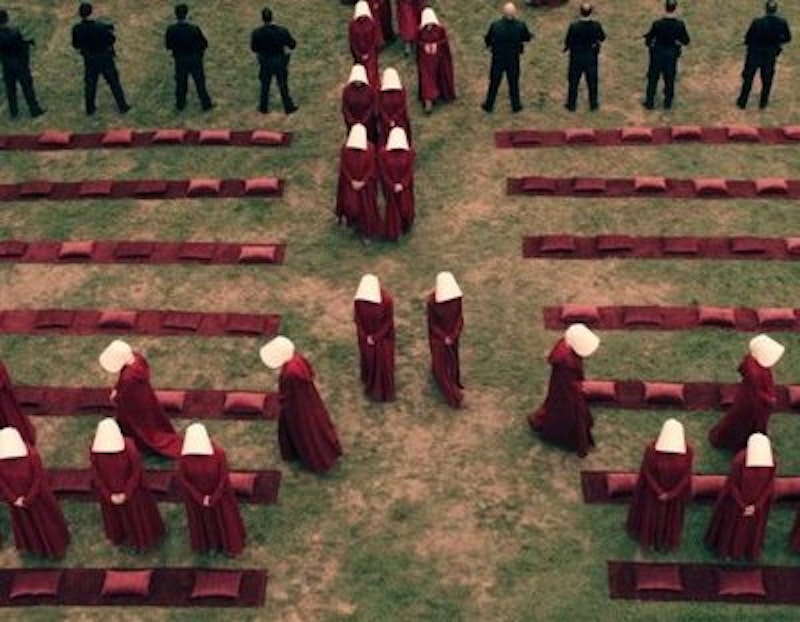 While watching the second season of Amazon’s The Man in the High Castle a few months ago, I found myself skeptical that the now-most compelling character, John Smith, the American soldier turned high-ranking SS official, could be such an enthusiastic convert after so few years.

The series, based on the 1962 Philip K. Dick novel, concerns a United States taken over by the Nazis on one side, and Imperial Japan on the other. Americans’ reactions to this range from docile, to hostile, to thriving. It seemed absurd that Smith would’ve taken to Nazism so readily when he remembered living in and fighting for the United States. Then I did the math. The Man in the High Castle is set in 1962. That is 15 years since the end of the war in this world—17 in ours. Nazi Germany, in real life, lasted a total of 13 years. Suddenly the show became more believable.

Change—terrifying change in society—can happen quickly. It rarely happens as quickly as we imagine.

Margaret Atwood’s 1985 speculative fiction classic The Handmaid’s Tale has just aired its eighth episode of a Hulu television adaptation. Previously turned into a clunky Canadian movie in 1990, this new version is beautifully shot, well-cast, and stars Mad Men’s Elizabeth Moss who easily carries the role of a shrewd, frightened and wry woman, concealing fury and a determination to survive the theocracy she finds herself in. Moss plays Offred nee June, the eponymous woman whose narration states she “once had another name--but it’s forbidden.” She’s had a child before. She’s presumably fertile. Her husband was previously married, so their union doesn’t count in this new world, and she has been become birthing chattel.

Eight episodes in and the culture war surrounding this show has diminished only because it’s mid-season, and the world is full of more pressing news. However, the progressive-conservative war around the show and its reality, or lack thereof, continues. The stars and producers of the show were at first scolded by liberals for suggesting that the story they’re telling isn’t an overtly feminist one. It is. But they weren’t wrong to point out that in Atwood’s theocracy of Gilead, which arises from a pollution-covered America over the course of an unclear number of years, most men are miserable, too. Offred and her companions often walk by the wall where the bodies of men--it always seems to be them--are laid out as a warning for those who violate the crimes of Gilead. In the book, they also walk beside the lower class men who guard the streets and check the handmaidens’ passes, and Offred torments them with what little power she has, by moving her hips, and showing them what they are not yet worthy of having (a woman).

Atwood provided this nuance both in content and when she speaks of her book. Even the leader of Offred’s household has his moments of humanity, though they double as self-aware hypocrisy. “The Commander” is a powerful man who appears by the sixth episode to have been one of the masterminds of this Christian Taliban-run America. He does, however, give Offred a magazine to read, play Scrabble with her (both illegal), and (though it has yet to be portrayed on screen) take her to a fancy party in the book. All of this is done in secret from his wife.

But, you know, the Commander is also raping Offred, and she, and the writers, and Moss’ acting make that clear. She’s being raped, and in this society she is nothing except a walking womb—albeit an “honored” one. The Commander’s wife, the coldly beautiful, occasionally human woman who was once his partner, and is now walking behind him in this new world she asked for continues to be a fascinating character, even if she was intended to be much older in the book, and more of a Tammy Faye Bakker evangelical, and less about an icy blonde who plans religious coups with her husband. However, the contradiction of a woman who traveled around preaching that women should stay home, but as the book puts it is “furious… now that she’s been taken at her word,” and still furious that she can’t even seem to provide her husband with children is a compelling picture of a real sort of woman.

Humans have a “now” bias. It’s worse than ever today. However, as ghastly as Donald Trump is in myriad ways, being a religious fanatic is not top of the list. Vice President Mike Pence probably doesn’t want to bring about the Republic of Gilead, but he’s more likely to support it than Trump. Trump is intensely indifferent to any issue, unless he has to pander about it. However, any authoritarian tendencies in the current, technically Republican president have been seized upon by the left and pointed to with trembling hands as proof—proof that this Hulu show is just one step away from reality.

The left’s inability to recognize fiction is irritating, but the right-wing backlash is frequently just as lazy, but without any literary awareness. Take Brent Bozell’s recent piece in Townhall, headlined “The Fake News of ‘The Handmaid’s Tale.” In it, Bozell immediately missteps by suggesting that dystopian fiction’s popularity is somehow a product of Trump’s presence in the Oval Office. As if the moment he was elected—and not a minute before—the novelists, script, and screenwriters went to work creating thinly-veiled versions of America just to annoy conservatives.

Dystopias have been around for the last century, and more. George Orwell’s overly-referenced 1984 is one example. Aldous Huxley’s Brave New World and Ayn Rand’s Anthem are others. Most recently, however, it was The Hunger Games series that gave dystopian fiction a boost. With some exceptions, teen readers’ mania for that trilogy is what pushed writers and publishers of the new Millennium to dream of the bleakest possible future.

But this is what we do. Humans love to fear and imagine things as worse as they possibly could be, and God knows it was better before. Fiction writers simply turn that fear, and that what-if into entertainment. This isn’t to say that pro-choice or feminist questions are irrelevant to the story. However, anyone can watch or read this tale, and feel dread. The horror of your sex life, your reproduction, your family, your choices, and even your thoughts not being your own is a timeless one. It’s happened to real people all over the world, throughout history, but most often to women.

In a 1986 New York Times article, Atwood claimed that she was not trying to scream out her political views in writing The Handmaid’s Tale. There’s a reason it’s called speculative fiction, and she wrote what she called a hypothetical and not “a billboard.” Inspired by the Iranian revolution, Ceausescu's Romania, and what Atwood saw as a disturbing puritanical core at the heart of America, especially during the era of the Moral Majority, she wrote a piece of fiction. That fiction is easily interpreted and superimposed over real life events. In the book, and fitting for the 1980s—the awkward spot between conscious-raising ‘70s and ‘90s riot grrrl reboots—Offred remembers her mother as a second-wave feminist cliché. She rabble rouses, protests, and looks incredulously at the younger generation of women who take all of these hard-fought gains for granted.

Offred’s mother has not yet appeared in the many flashbacks on screen in the Hulu show. However, her overt, earnest feminism has appeared in the mouth of Offred’s best friend from “the time before”—Moira, played by Orange is the New Black’s Samira Wiley. In the series’ least human scene, Moira and June (Offred) and June’s husband Luke are sitting around a table discussing what to do after all the women (presumably in the whole country) have been fired from their jobs, and their bank accounts frozen, and/or given over to their husbands. Moira, understandably a little peeved with men, rants at Luke, who banters back. Luke comes off as an obtuse asshole, but Moira’s second-wave posturing and lesbian ranting isn’t much better. June is affectionately entertained in the manner of oh you two, not this again. The dialogue sounds like vigorous academic theory sparred over in a college class, meanwhile something very unsubtle has happened to the women of this America. The frog may have been slowly boiling to death as Luke, Moira, and June blithely ignored the political situation over the previous years (and the series notes this with scenes of protest, and the implication of dropping fertility rates), but the frog was just nuked. Nothing about it rings true, unless you assume that men will betray all women in the end, and that all changes in politics happen literally overnight.

They can happen fast. Moira says “they needed to do it this way... can you imagine the airports otherwise?” Nazi Germany has captured the world’s attention for 70 years in part because of its terrible swiftness. In the 1920s, Berlin was one of the freest places in the world. By 1933, the enlightened Institute for Sex Research was destroyed, its research burned, and its list of the names of gays and lesbians seized. On the other hand, the oppressed people usually assume that the hell will be over soon. Even after the Nuremberg Laws in 1935, too many members of the Jewish populations of Germany assumed it would be over eventually if they kept their heads down. Freedom usually drips away, as people wait for it to vanish in an unstoppable, clearly visible wave.

It’s not that fiction is fiction, and is therefore not worth holding up to compare and contrast with the real world. Nor is it that Atwood and the stars, producers, and writers of The Handmaid’s Tale don’t have political agendas and parallels in mind when they write and adapt this novel. But the complexities keep creeping in, when we realize, say, that saving the environment was one excuse for making the hell that is Gilead, and that even in a society or world that is cruelly sexist, women don’t necessarily have each other’s back—often they’re scrambling for the scraps of power men see fit to dole out.

Women in the US may be safer than we have ever been before. That doesn’t make the story of females as chattel in a new American theocracy suddenly not compelling. We like to scare ourselves, and The Handmaid’s Tale is a beautiful way to do just that.