Self-hatred in The Believer. 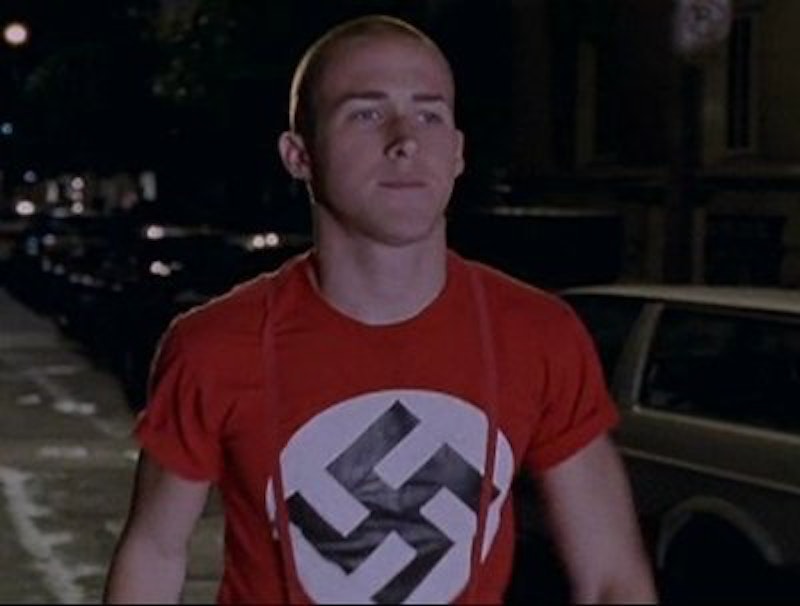 This is part of a series on fascism in film. The last entry on Remains of the Day is here.

One of the prevalent stereotypes about Jews is that they hate themselves. The idea of Jewish self-hatred was popularized by Theodore Lessing's 1930 book Jewish Self-Hatred that declared, "There's no person of Jewish blood in whom we couldn't find at least signs of Jewish self-hatred." Zionists or religious Jews have, for decades, painted assimilated Jews as touched by anti-Semitism, eschewing their faith because of a loathing of their true Jewish essence. The charge has stuck in part because it resonates well with anti-Semitic tropes about Jewish inauthenticity, weakness, and rootlessness. Jews have no land; they’re eternal refugees, lacking a core. It makes sense then that Jews would not authentically embrace Judaism, but would instead be divided against themselves.

The Believer (2001) takes the theme of Jewish self-hatred and goose steps vigorously with it. The movie, directed by Jewish screenwriter Henry Bean, is (very) loosely based on the life of Dan Burros, an American Nazi Party member who shot himself after a reporter revealed he was Jewish. The plot focuses on Daniel Balint, played by gentile Ryan Gosling. Daniel is a young, very intelligent, angry man whose struggle with God and his faith leads him to become a Nazi.

The film's justification for Daniel's Nazism is ingenious. We see scenes from Daniel's childhood, in which he argues with his rabbi about the story of Isaac's sacrifice. Actor Jacob Green, as young Daniel, passionately repudiates God as a "conceited bully," a monstrous ogre-father who demands Abraham murder his own son simply because he is God. God's arbitrariness and cruelty is, the film suggests, analogous to fascism. Daniel wants to be a Nazi because he wants to follow God's example. The film sets up an iron equation. Daniel is a believing Jew. God hates and torments the Jews. Therefore, to be true to his faith, Daniel must hate and torment Jews. Self-hatred is entwined in Jewish religious belief, and Nazis are presented as the truest Jewish believers. Daniel repeatedly praises Eichmann's knowledge of the Torah.

Daniel makes this point repeatedly and passionately; hating Jews is natural, because Jews are despicable—and more, Jews actually call to be hated and crushed. Jesus was crucified; Jews in Egypt were slaves—the Jew is a victim, and as such Jewish nature calls out for abuse. The disturbing opening of the film shows Daniel stalking and then beating a Jewish student. Daniel taunts the student for his weakness and then shouts at him, "Hit me! Hit me!" As a Nazi, Daniel is sneering at the student for his Jewish weakness. As a Jew, Daniel is calling out to be abused.

In The Believer, then, fascism is a kind of heretical offshoot of Judaism. Nazism is a potential at the core of Judaism, which means that Judaism innately hates itself. Believing Jews are Nazis and vice-versa.

But is this really what it means for a Jewish person to be a Nazi? Bryan Mark Rigg's controversial book Hitler's Jewish Soldiers is about people with Jewish heritage who joined the Nazi party. But for the most part these people weren't conflicted Jews suffering a spiritual crisis of faith. They considered themselves Germans. They tended to be baptized Christians with a Jewish grandparent somewhere in the family tree. Others were forced into the German army and concealed their Jewish identity. Others were traumatized when they learned late in the war of the full extent of the Final Solution and realized their relatives were being killed. For these people, Nazism wasn't some sort of logical end point of Jewish faith. Rather, "Jews," under Hitler were Nazis, when they were, because they did not consider themselves Jews. They only identified with, or were forced to identify, with Jews when Nazi racism backed them into a corner.

The concept of Jewish self-hatred assumes that there’s some quintessential, inescapable authentic core of Jewish identity, and that if a Jewish person (defined by whom?) doesn’t embrace that Jewish identity, then the person hates their truest self. But people with Jewish heritage can have a whole range of relationships to that heritage, from passionate devotion to indifference. White Jews in the United States are generally seen as white, and they can make whiteness central to their identity if they want. Jerry Siegel and Joe Shuster created Superman, an all-American Christian kid named for Nietzsche's German ideal. Did that mean they were self-hating Jews? Or did it just mean that many secular Jewish-Americans in the 1930s saw the "American" part of their identity as much more important than the "Jewish" part?

When Jews, however defined, are anti-Semitic, it's generally not because Judaism is innately anti-Semitic, and Jews hate themselves. It's because a lot of people hate Jews, and sometimes people who have a choice of identifies identify more strongly with the anti-Semites who are hating than with the Jewish people being hated.

Daniel is a stereotype of the self-hating Jew—but he's also a particular kind of stereotypical fascist. Daniel is smart, articulate, and charismatically physical. He's spiritually torn, and psychologically complicated. He’s a case study, a pathological portrait. Nazis are odd, like Jews; they’re different, like Jews; they must be explained, like Jews. The fascist circle that Daniel joins yearns for mainstream acceptance; they’re (like Jews, supposedly) trying to assimilate. Fascists and Jews are marginalized together; it makes sense that you would study them together. It makes sense that they are the same person.

But it doesn't, really. The thing about fascism, racism and anti-Semitism is that they're not really all that unusual. As Trump has been eager to demonstrate, hatred of marginalized people is consistent with American history and with much mainstream American thought. If Jews sometimes hate Jewishness—if Clark Kent is an anti-Semitic caricature—it's not because Jews are naturally consumed with self-hate. It's just because there's a lot of ambient hatred of Jews out there, and because Jewish people pick it up, just like everybody else does.

It's tempting to blame The Believer on Henry Bean's own Jewish self-hatred. But it's not like Jews are the only Americans who find fascists like Milo Yiannopoulous fascinating. Self-hatred assumes that the self that hates is the same as the self that’s hated. But you don't really need a self to do the hating when fascism, that poison cloud, can do it for you.