The United States of Persia

Sympathy for the conquerors in 300. 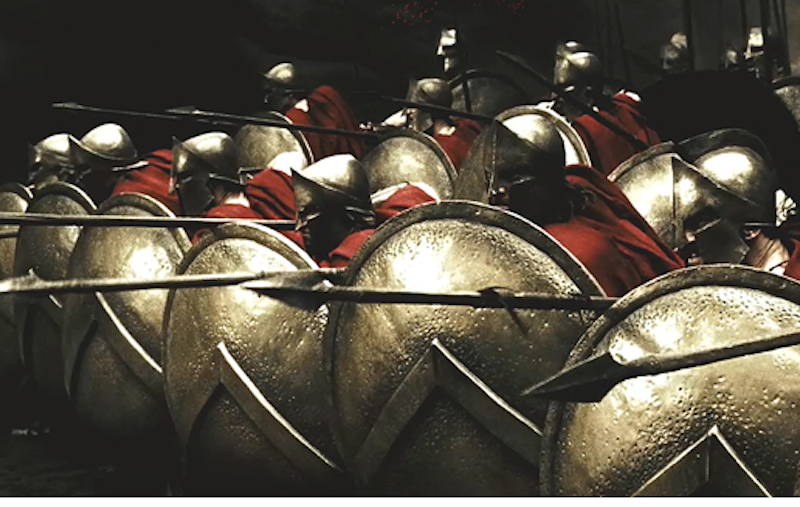 This is part of a series on fascism in film. The last entry on The Believer is here.

Zack Snyder's 300 (2006), like the Frank Miller/Lynn Varley graphic novel on which it is based, loves fascism with a campy, bare-chested, manly love. The film about the storied Spartan stand against Persia at Thermopylae opens with a tribute to Spartan eugenic culling—Spartans threw unfit babies into a pit to die, isn't that awesome and manly? The rest of 300 goes out of its way to assure you that eugenics is awesome—the villain of the piece is a grotesquely prosthetically-enhanced hunchback who betrays the Spartan cause, showing that he should’ve been murdered as an infant because disabled people are disgusting and servile and can't be trusted. In addition to loathing disabled people, the film also hates the Persians, who are presented as an amalgamation of black people, Arabs, and decadent homosexuality. They are a debased "Asian horde" through whom the white, upright, muscled Spartans cleave a bloody, cleansing path.

The whole film is a latter-day riff on the hyperbolically racist scene in Birth of a Nation in which one white man beats the crap out of a endless stream of inferior, hapless black antagonists until at last one member of the duplicitous, inferior mob shoots him in the back.

300's racism, its hatred of the disabled and homosexuals, its militarism, its fascination with homoerotic bonding—all of this add up to a fascist fever dream. It even includes a stabbed-in-the-back narrative; a greedy politician in the pay of Persia teams up with the inbred, diseased Spartan priests to try to undermine the nation's will to war.

But there’s one element of the story that seems, at first, to push against one of fascism's most treasured ideologies. 300 is anti-imperialist. Hitler believed Germany had a messianic destiny of expansion; he wanted to kill and deport millions of Poles and Slavs so the Germanic peoples could spread east into the newly denuded territory. He was inspired in part by America's history of native displacement and genocide, which he saw as an inspirational blueprint. Hitler loved war, conquest, and subjugating others.

300, in contrast, is resolutely anti-imperialist. The Persians are an immense, imperial aggressor. King Xerxes (Rodrigo Santoro) is portrayed as a power-mad dictator, demanding fealty and obeisance. The Spartan's King Leonidas (the inevitable Gerard Butler) fights in the name of freedom, reason, and the self-determination of Greece. He’s the nobly be-loined father of Western enlightenment and democracy, a last barrier against the "mysticism" and tyranny of the onrushing internationalist conquerors. Xerxes invades; Leonidas defends. Conquest is bad; liberty is good. That's not fascist. Right?

But fascism does have a place for anti-imperialism. It's just a kind of mirror-image, topsy-turvy anti-imperialism, in which the victims and the perpetrators of imperialism are switched. Hitler believed that the Jews were determined to conquer Germany and the world; from his perspective, the German people were engaged in a valiant last stand against the oncoming, sneaky, duplicitous decadent Orientalist horde. Similarly, the proto-fascist government of the Confederacy saw the Civil War as a story of Northern aggression; the Union was trespassing onto the South's inalienable right to hold in bondage its own imperial spoils.

Classic imperialism, in the Spanish or British mold, generally rested on missionary zeal—a belief that one's religion and culture was manifestly superior, and that the conquered therefore benefited from subjugation. Fascist imperialism is built on a conviction of racial superiority. But it's also energized by resentment. Fascists claim to be victims; they say they’ve been cruelly humiliated, enslaved, and violated. They unleash violence against their inferiors not to save infidel souls, but to punish fiendish iniquities.

300 portrays a scrappy Western democracy invaded and besieged by a massive Orientalist army with vastly superior firepower and armament. In doing so, it neatly reverses the actual conditions of America's then-ongoing war in Iraq, in which the United States military was bogged down in a fight against an exponentially less well-equipped insurgency. The film presents the Spartans as the enlightened ancestors of the American polity. But it could just as easily see us as the heirs of Xerxes, the bloated would-be world ruler, whose decadent lust for power leads to his humiliation in the sands of a should-be insignificant backwater.

Alas, the film is not a rebuke of American imperialism. On the contrary, the vision of noble enlightened white heroes besieged by tyrannical, disgusting, irrational vaguely Arabic/Islamic others is clearly meant as an endorsement of US militarism, and of US invasion. Liberty is under existential threat. Those who urge peace are diseased, lascivious, mystics or slimy politicians in the pay of the enemy. The only true path is the road of blood. The more non-white people who fall to the sword, the more the cause of liberty and truth is advanced. Piles of dead become a symbol of virtue and bravery—which is how you get to Auschwitz, I suppose.

Reverse imperial stories are common in science fiction and other venues. The War of the Worlds imagines Britain invaded by Martians, and compares this directly to British invasion of Tasmania. The Handmaid's Tale puts a white woman in the position of black people enslaved by European colonizers. You could argue that white savior stories use a similar dynamic; in A Dry White Season, the noble white South African is placed, or places himself, as an ally with the subjugated black Africans. In doing so, he too becomes the target of racism and of the colonizers vengeance.

Reversing the position of colonized and colonizer is often done consciously as a way to create sympathy or solidarity with the oppressed. Viewers—generally conceptualized as white—are asked to put themselves in the place of those who are oppressed. It's an anti-fascist tactic. If you empathize with the marginalized, the thinking goes, then you’ll be moved to dismantle oppression.

Sometimes though, 300 suggests, empathizing with the marginalized, or putting yourself in their position, can just be another excuse for fascist violence. Fascist ideology is built upon a fictional history of oppression. In the past, fascism tells its adherents, we were betrayed, conquered, ground in the dust. And because of this, we now have the duty to kill the evildoers in the name of revenge and righteousness. Anti-imperialism is perfectly consonant with fascism—as long as you always see yourself as Leonidas, and never as Xerxes.