A story of four jerks. D 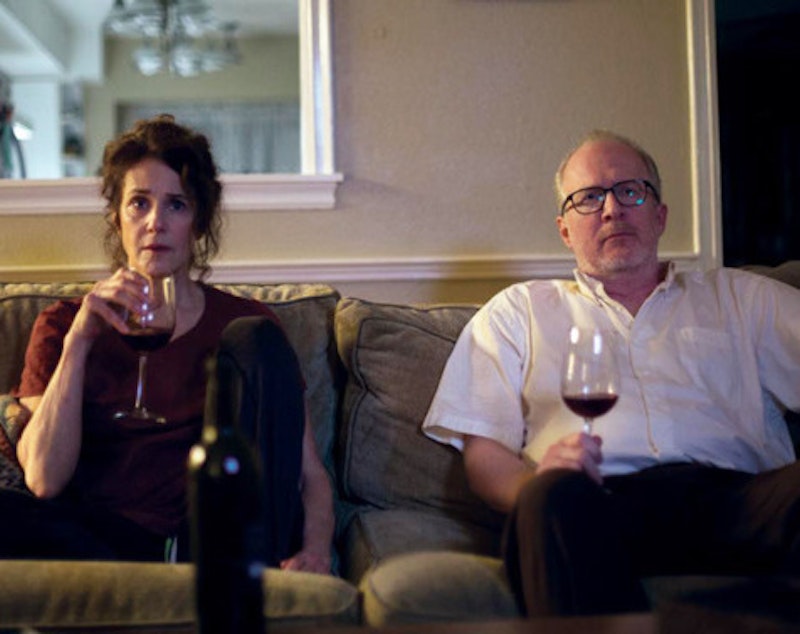 Three years after Philip Seymour Hoffman’s death, the only actor that’s come close to conjuring the same pathetic anger and regret: Tracy Letts. I’m a little behind on the eight ball, though—I first saw Letts in Todd Solondz’s Wiener-Dog last summer, where he played a menacing asshole of a dad, furious at his wide-eyed son for making his family adopt this poor little wiener dog that ends up eating some leftover chocolate and shitting lumpy, bloody rivers all through their pristine, modern New Jersey home. Letts slipped nicely into Solondz’s brutal, jet-black world of everyday human horror, though he wasn’t afforded the chance to play a true creep like Hoffman’s character in Happiness, a blotchy loner with coke bottle classes and a penchant for cold calling women in the phonebook and masturbating to the sound of their confused voices. I hoped that Azazel Jacobs’ The Lovers, starring Letts alongside Debra Winger, might spring from the same heart of darkness, but it’s poorly written with stilted and wooden performances.

A positive review in Variety begins with this bizarre paragraph: “It’s been painful in recent years to see Todd Solondz, the once-inspired director of Welcome to the Dollhouse and Happiness, making his characters so lowly and pathetic they no longer seem real. If Solondz had kept his empathy for life’s everyday losers but put aside his compulsion to punish them for it, he might have made a comedy of barbed humanity like Azazel Jacobs’ The Lovers.” I feel like Mugatu—who looks to Solondz for empathy? The blunt perversion, malice, manipulation, anger, and abuse of the people of Solondz films like Wiener-Dog, Storytelling, and Palindromes will always be more compelling and horrifying than the boring “losers” of The Lovers, Mary and Michael, vaguely depressed bourgeoisie sipping red wine and fucking other people on the side. Jacobs writes and blocks The Lovers as if it were adapted from a play, full of awkward pauses, overwritten and inorganic dialogue, all focusing on four dull and repellent people in their own everyday way. These people are familiar because they’re the cheating husbands and wives we see on TV and in movies like this, where infidelity is excused, sympathetic even.

I don’t need to see Letts’ Michael in drag or Winger’s Mary smoking meth. Perversion is not necessary for a story like this, but I’d rather lick envelopes all day than follow these characters around for another 90 minutes. The Lovers isn’t mocking suburban malaise and ennui—it’s either a product of that or a dull imagination. I felt contempt for everyone in this movie, because they’re so boring and scared. Michael and Mary, unbeknownst to each other, are separately plotting with their own lovers to finally end the marriage, but only when their son Joel (Tyler Ross) visits for the weekend with his girlfriend. What a family. Better believe Joel has mommy and daddy issues, and his reaction when it all blows up—punching a hole in the wall—is boring, pathetic, and predictable. Once again, Jacobs’ imagination fails him. I love going to movies filled with unpleasant people, but being a prick and a cunt just isn’t enough, and that’s never what makes people interesting.