Cues from The Fault in Our Stars. B 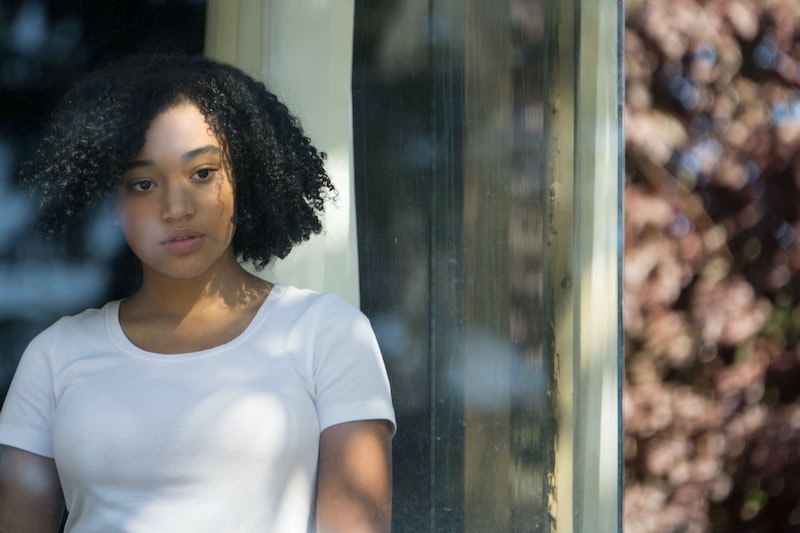 Everything Everything starts off as a transparent knockoff of The Fault in Our Stars: a teenage romance, based on a young adult novel—one of the leads has a potentially fatal disease—and in which neither teenager speaks in any way like any teenager who’s ever lived.

It never really moves beyond there, and is a mess at various points. But Everything Everything has a few big things going for it: a really strong lead performance at its center, one of the better-designed houses for a movie set, and a completely bonkers final twist.

The film could best be described as The Boy in the Plastic Bubble (or Seinfeld’s Bubble Boy), only as a cute 18-year-old girl, falling in love. Maddy (a very good Amandla Sternberg) was diagnosed at the age of two with SCID, a radical autoimmune disease that prevents her from ever leaving her house, gorgeous and well-appointed as it is.

Cared for by her doctor single mother (Anika Noni Rose), she meets Ollie (Nick Robinson), and they begin a tentative romance, somewhat complicated by their not being able to touch or even be in the same room. But of course, rebelliousness (and teen hormones) soon get the better of them, and the story soon surprises.

There’s a lot in this film that doesn’t make sense, especially the way Maddy doesn’t speak, act, or behave like someone who hasn’t left their house in 15 years. The way the film dramatizes text-message conversations is silly, and a recurring motif involving an astronaut just doesn't work.

But what Everything Everything does have is a star-making performance by Sternberg, a Hunger Games veteran in her first starring role, and crackling chemistry between the two leads. And a few months after Get Out knocked everyone on their ass, Everything Everything takes the complete approach to interracial romance: it’s unremarked upon.

Then there's the surprising ending. I was legitimately shocked by the twist but I’d imagine some others won’t be. And while the film isn't much of a pure tearjerker as Fault in Our Stars, at no point do the characters make out in the Anne Frank House, so it's got that going for it.

Diary of a Wimpy Kid: The Long Haul. C-

The Diary of a Wimpy Kid franchise, for its fourth movie, has gone full reboot, entirely recasting all three kids roles and both parents, even with the same director returning. The film has its moments, and the lead actor makes quite an impression. But ultimately, it adds up to a PG-rated less-funny, remake—another one, I mean, of—National Lampoon’s Vacation.

The Long Haul is the fourth adaptation of Jeff Kinney’s long-running series, books beloved by my sons. This one hits all the usual road-movie marks, from a ubiquitous antagonist to repeated car trouble to odd detours to places that it makes no logical plot sense for the characters to go.

Despite the film looking the same as all of the others, the aging young actors (and their parents) have all been replaced. Jason Drucker steps in as main character Greg and he's decent, but Owen Asztalos is never anything but irritating as his older brother. Alicia Silverstone, who I didn’t recognize until the end credits, plays the mom, and Tom Everett Scott replaces his That Thing You Do! bandmate, Steve Zahn, as the dad.

There are a few isolated moments of wit, such as an inspired joke about Uber not being profitable, and sly homages to Animal House and Psycho. But overall, the tone is pretty dire, full of subpar scatological jokes and head-scratching plot details, like a late setpiece in which the characters push a broken-down car down a steep hill for no reason at all. There's also a Mac and Me level of product placement, as Cheetos figure in two major plot points.