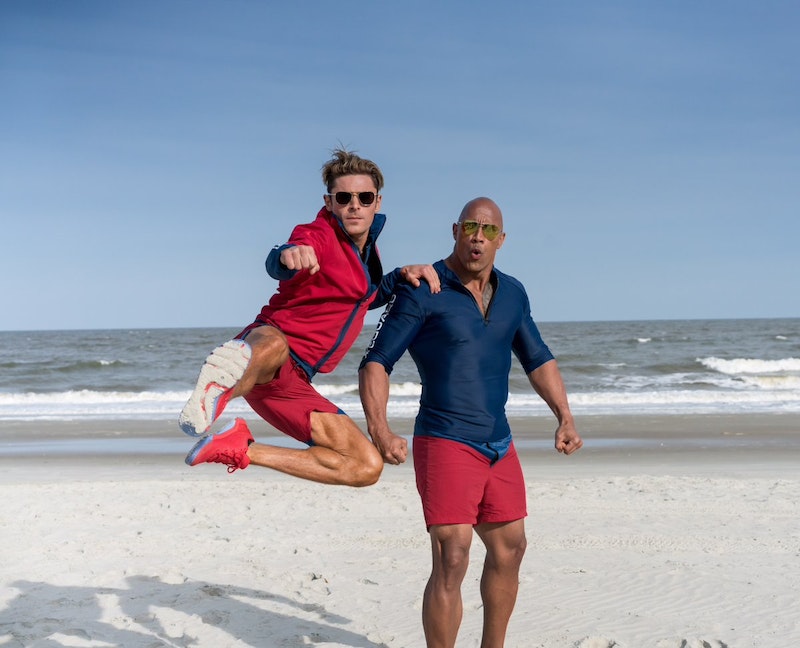 The new movie adaptation of Baywatch occupies a sort of cinematic no man’s land. It’s a comedy in which the action is staged abominably and is seldom funny, and the plot is a lot of nonsense. It’s a remake of Baywatch that’s neither particularly faithful to the show, nor much of a parody or satire of it. Worst of all, it’s not even fun.

The idea, I think, is to replicate the 21 Jump Street movie and its sequel, which had a simple and very successful formula: remake a popular TV show from the past, cast likable lead actors, and incorporate a witty, self-aware script full of satire that both deconstructs the original show and exists on its own as an entertaining and funny movie.

The Baywatch movie attempts something sort of similar, but its script (from horror movie veterans Mark Swift and Damian Shannon) isn’t nearly up to par. In fact, what it finds funniest about Baywatch—that the characters often act more like cops than lifeguards—is the basis for roughly half the movie’s jokes, even though there's nothing about that particular dichotomy that's especially funny.

Dwayne “The Rock” Johnson, in a rare total misfire, steps into David Hasselhoff’s trunks as lifeguard boss Mitch Buchannon, lording over a beach that includes a bevy of red-bikini’d babes. Zac Efron plays the young cocky sidekick, a disgraced Olympic swimmer. The character is obviously based on Ryan Lochte, except that Lochte’s dumb-bro persona is always hilarious, and Efron’s, in this movie at least, never is.

The cast is rounded out by a trio of attractive female lifeguards (Alexandra Daddario, Kelly Rohrbach and Ilfenesh Hadera), who have maybe a single established character trait among the three of them, and Jon Bass as the funny fat guy, a Josh Gad type who’s considerably less comedic and charming than the film thinks he is.

After a brief intro that replicates the TV show’s trademark slow-motion shots of buxom female lifeguards running slowly towards the camera, Baywatch leaves the beach behind almost completely for a plot that has more in common with something from Miami Vice: the lifeguards try to stop a villainous resort hotel owner (Priyanka Chopra) from annexing their beach, through an evil scheme that includes both drug-dealing and multiple assassinations.

So the characters abandon the beach to go on undercover missions, solve murders, catch bad guys and other acts more associated with police work than lifeguarding. The movie gets around this paradox by… having characters mention it, over and over again. Why this is supposed to be funny has to be some perverse form of circular reasoning.

The crime plot is both obvious from the beginning and way more complicated and exposition-dependent than it needs to be. And then there’s the action, some of the sloppiest stuff I’ve ever seen in a big-budget film. An early scene of a rescue of a boat on fire has some laughably bad green screen work, while the finale is plagued by both terrible spacing and the presence of fireworks in the background.

Not even the supposed comedy gags are funny, especially not the one in which the film takes five minutes to essentially re-enact the “pork and beans” scene from There’s Something About Mary. Dwayne Johnson's entire character arc consists of bullying Efron by comparing him to various boy bands. There’s a lot more gay-panic humor than a 2017 movie should probably have, and it even screws up the inevitable Hasselhoff cameo by telegraphing it two minutes in advance.

Director Seth Gordon has done much better, from the brilliant 2007 documentary The King of Kong: A Fistful of Quarters to the first Horrible Bosses film. But Baywatch is more in line with his misbegotten Melissa McCarthy vehicle Identity Thief from 2013.

What's disappointing is that there's plenty of fertile ground for parody of Baywatch, starting with the way such jiggle-based entertainment was such a product of the 1990s that might be looked at differently today. But the movie touches none of that, apparently believing, for some reason, that its repeated cops-as-lifeguards joke was the smarter play.