The Dull Pulp of Under the Silver Lake

David Robert Mitchell's follow-up to It Follows is a strange slog, featuring a dull protagonist, a plot that's full of nonsense, and a mystery that's not at all interesting. C- 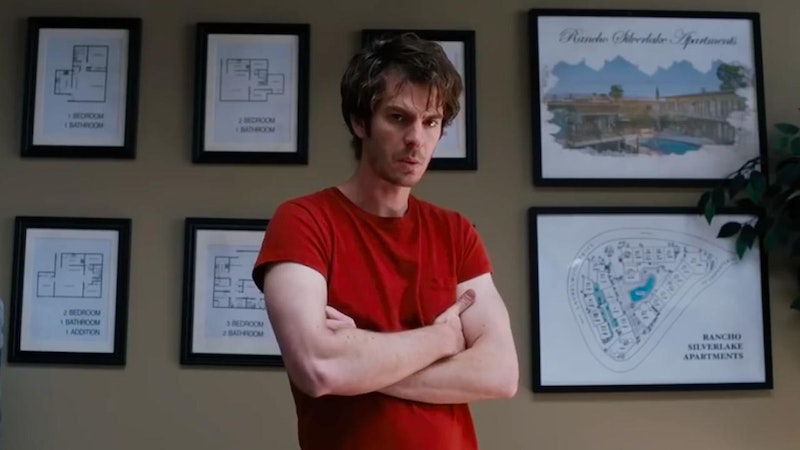 Under the Silver Lake is perhaps the worst imaginable version of one of my favorite types of movies.

I love a good Los Angeles mystery, with neo-noir elements, one that takes the protagonist into weird and unexplored geographical corners of the city. The Big Lebowski, Inherent Vice, Mulholland Drive, and The Nice Guys—there's nothing like a movie that builds on the Hollywood noir tradition, while taking it, to various degrees, into realms of comedy and satire. And when it comes to both plot and protagonist, the weirder the better.

Under the Silver Lake seems at first like it's going to be that type of movie, but then it's not. It's a strange slog, featuring a dull protagonist, a plot that's full of nonsense, and a mystery that's not at all interesting. The filmmaking is compelling, but it can't save the film.

The sophomore effort from David Robert Mitchell, who made the respected 2014 horror film It Follows, Under the Silver Lake stars Andrew Garfield as Sam, an unemployed L.A. layabout who's obsessed with conspiracy theories, as well as his frequently topless neighbor. The plot mostly involves recycled elements from the films above, as the protagonist ambles around Los Angeles, attempting to suss out a complex conspiracy that includes symbols, old issues of Nintendo Power and a vintage zine, and other material that calls to mind some of the sillier plot discursions on True Detective. The plot also turns in part on numerology, which is one of the stupidest things in the world. There's already a subreddit dedicated to the film's mysteries.

Under the Silver Lake fails because the protagonist is such a zero that almost no atmosphere or cool cinematography can succeed in making any of this interesting. I'm generally an Andrew Garfield skeptic. I don't find him charismatic or compelling, and after seeing him in 15 movies I couldn't tell you the first thing about what his screen persona is supposed to be. I've enjoyed him in the right part, but here he just sleepwalks. He's a boring, nondescript dude. Yet women are always materializing and getting naked for him at the drop of a hat.

On the surface, the film has a lot in common with Inherent Vice, a film that I love but whose plot I still don't much understand even after many viewings. The difference is, that movie is so superlative in every other way, from performances to dialogue, to visuals, that I never much minded. Under the Silver Lake is Inherent Vice, only if Joaquin Phoenix's Doc Sportello had been deathly boring.

So what's to like? I enjoyed the scene involving a character called "The Songwriter," supposedly responsible for all of the music in history. And the musical selections are well-chosen, including one scene scored to the R.E.M. song "What's the Frequency, Kenneth?" Under the Silver Lake has had an odd hype cycle. It arrived at Cannes last May, as the long-awaited follow-up to It Follows, and got a mixed reception there and at other festivals. The film was set for a fall bow last year, through distributor A24, but it was delayed, and delayed again, and is being dropped on VOD, in addition to openings in a couple of cities.

A lot of recent movies have been dumped by their distributors, but turned out to be pretty good, including two films in the last three months—Serenity and The Beach Bum—that both star Matthew McConaughey as a guy who lives on a boat in Florida. Under the Silver Lake, strong a pedigree as it enjoys, has earned its lackluster release.