As much as I enjoyed the movie, there were a few things I noticed as an adult that gave me pause. 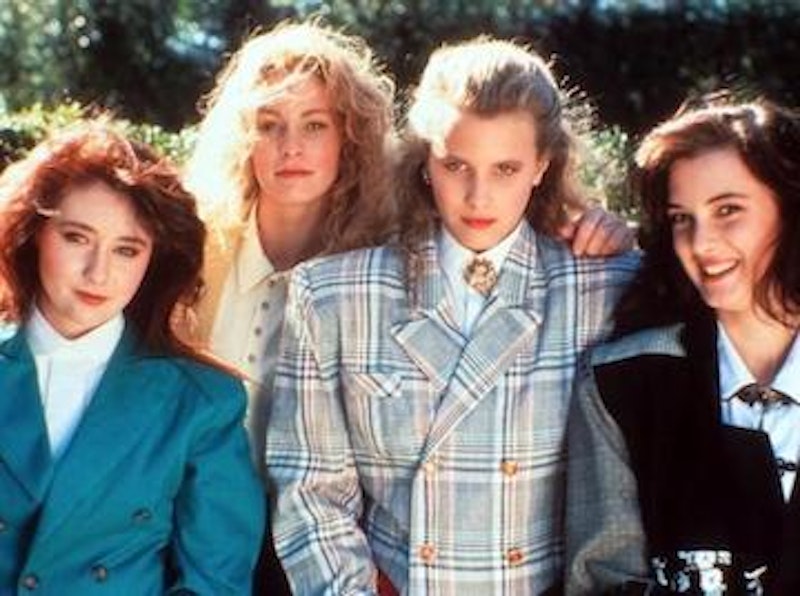 In a recent essay for The Wrap, 24-year-old Omar Sanchez wrote about watching Heathers for the first time, on the eve of the film's 30th anniversary. Anticipating a feel-good teen comedy, Sanchez describes his disappointment at the film's violence, in addition to its cynicism and nihilism. The argument rests on school shootings, unusual enough in 1989 to be played for laughs, but are too commonplace in 2019 to be fodder for satire. Sanchez goes on to suggest that post-#MeToo, the film's flippant treatment of sexual assault and related bullying are also reasons it could be triggering for many viewers. The question Sanchez raises is whether or not Heathers holds up to a new generation of viewers, and concludes that it doesn't.

Sanchez has a few fair points, but I think there's a greater generational schism at work. More than a decade older, I see the film differently, and also see the issues he addresses with perhaps more distance. The R-rated film was released just shy of my 11th birthday, and I didn’t see it until a few years later, when I was in high school. I mostly remembered Heathersas a harbinger to films like Jawbreaker, Mean Girls, and Easy A.

In watching Heathers again, enjoyed it more than I expected. Its satire is surprisingly literate, feminist, and richly layered. Veronica Sawyer is a hero in a society rife with villains, and acts as the film's moral compass. While it's always been clear that at least two of the three Heathers are out-right villains, the marketing of JD as a romantic lead, even in the original trailers, belies his true treachery.

When we're introduced to the Heathers, it's in Veronica's dream sequence. They're trampling flowers to play croquet in a garden, with Veronica buried up to her neck, her head acting as the peg to receive blows from their balls. Heather Chandler is dressed in Red Queen red, Heather Duke is green with envy, and Heather McNamara is neutral in yellow, a minion in a miniskirt. Veronica's voiceover carries us into the next scene, expressing her emerging conflict at her friendship with Chandler. Taking us into the real world high school cafeteria, we see Westerburg High's social stratosphere at work.

As Chandler and Veronica, who wears blue, poll their peers with a silly question for the school paper, new kid JD observes their interactions, as well as the prank they play. They've nicknamed an overweight girl Martha Dumptruck, and use Veronica's forgery skills to trick her into thinking one of the popular jocks is professing his love to her. JD has already observed those same jocks making sexist and homophobic jokes, and when they territorially confront him over his flirting with Veronica, he retaliates by firing blanks in their faces. In the cut to a real croquet game that turns out to be Veronica's garden, she and McNamara are clearly amused by JD's stunt, while Chandler is disgusted.

Last year I wrote a rebuttal to Molly Ringwald's post-#MeToo assessment of The Breakfast Club: "Within the realm of cultural criticism, there’s a tendency to approach the work as if it’s all a reflection of the artist’s ideology," and I thought the same about Sanchez's essay. The result is that he doesn't easily sort out the heroes from the villains, and to me, that makes the difference in how one perceives Heathers.

Initially, JD is treated like a hero, out to rescue Veronica, and the whole of Westerburg High, from the bullies—the Heathers, the jocks. He's adept at tapping into her desire for comeuppance, and manipulating her to his own twisted ends, so that they're killing their classmates and staging the scenes to look like suicides. As Veronica gets to know JD (and his father), and fully realize that his true nature is duplicitous and homicidal, she breaks up with him. When JD responds by saying this won't bring back Heather Chandler or the jocks, Veronica replies, "I am not trying to bring anybody back, except maybe myself," which sets the stage for the climax of the film.

The film's most overlooked avenue for satire is the clueless adults. During one of the scenes where we see the school faculty meetings, there's a discussion of letting students leave early in response to Chandler's death. When the principal realizes it's not cheerleader Heather McNamara, he responds that he'd be willing to go a half-day for the death of a cheerleader. To me, it's a small window into the way adults instigate the social order. Perhaps the most hilariously obtuse is Father Ripper presiding over Chandler's funeral: "I blame not Heather, but rather a society that tells its youth that the answers can be found in the MTV video games. We must pray that the other teenagers of Sherwood, Ohio know the name of that righteous dude who can solve their problems: it's Jesus Christ, and he's in the book."

The guidance counselor, Ms. Fleming, is appalled at her colleagues’ disregard for her students' feelings. But when given the opportunity later in the film, Ms. Fleming is the most exploitative of all. She shares the note Veronica forged for Chandler’s “suicide” with a class, "so you can feel its pathetic beauty for yourselves." After the jocks' deaths, Ms. Fleming invites a local news crew to a student gathering to express their mourning, which turns into a party.

In addition to Ms. Fleming, Heather Duke also uses the deaths as an opportunity for more attention. When JD and Veronica watch TV together, they flip channels to find Duke eagerly chatting with every local news crew. JD later exploits her eagerness for attention and newfound popularity to circulate a petition to get a popular band to play at prom, currently riding high on the charts with their hit, "Teenage Suicide (Don't Do It)." There's also the yearbook editor agonizing over how much space to give the dead students ("It's in much better taste than it sounds.") and another ambitious student who wonders if writing application essays on the suicides will get him into the Ivy League.

If there's one spot where I take issue with Sanchez misrepresenting the movie, it's in regard to Martha's suicide attempt. He describes it as directly related to the note prank, but I think it's established that she's an outcast routinely humiliated by the Heathers. In addition, he describes Duke's joke about it as something the audience is expected to side with. In these scenes, we see Martha alone in the gym bleachers while Ms. Fleming is simultaneously holding her cafeteria love-in. Martha is alone, and when she walks into traffic, the note pinned to her shirt is addressed to the school. Film scenes cut back and forth from the love-in to Martha, making her appear all the more isolated. When Duke, now dressed in red, goes to Veronica's house to tell her about Martha, Duke mocks her failing to actually die, and Veronica slaps her in the face, telling her that she isn't funny.

Veronica eventually succeeds by repeatedly out-witting JD's schemes. When she learns that he told her genuinely daffy parents that he believed she was suicidal, she rightly concludes that he intends to kill her. Beating him at his own game, she fakes her own hanging, and gets to listen to his psychotic rant about using the signatures from Duke's petition as a mass suicide note when he blows up the school. He leaves, believing that she's dead. When Veronica arrives at school and learns there's a pep rally, she realizes that it's a perfect opportunity for JD to follow through on his plan. Knowing that his father enjoys his work blowing up buildings, she's well aware of JD's access to materials. A prolonged confrontation leads to JD actually blowing himself up outside the school. Veronica returns to the school covered in soot, taking Chandler's red sash from Duke’s hair, telling her there's a new sheriff in town, and arranges to spend prom night watching videos with a now wheelchair-bound Martha.

As much as I enjoyed the movie, there were a few things I noticed as an adult that gave me pause. Heather Chandler's mystique is built on her being a junior that dates college guys. Since the film was made, sex offender registries have been created. I'd like to think that that the average frat boy is now much more reluctant about hooking up with high school girls. Heather Duke's bulimia is initially used by Chandler as fodder for mockery, but after she dies, Duke is miraculously cured, which simply doesn't happen.

Sanchez observes that the film is flippant about sexual assault, and it's not that I think he's wrong; it's just that this is one area where so much has changed. If Veronica would’ve tried to file a complaint about the frat boy trying to have sex with her, the near universal response from all of the adults at the time would’ve been, "You went to a frat party and got drunk, what did you expect? Why do you want to ruin this young man's life over your mistake?" Even now, since none of the guys trying to have sex with Veronica even tear her clothes, and one face-plants in the mud, I have doubts about the consequences they would face. Heathers was made on the cusp of third wave feminism emerging in the 1990s, when eating disorders and sexual assault were just starting to be taken serious by mainstream media (and by mainstream media, I mean Oprah).

In regard to Sanchez's initial questions over how well Heathers holds up for a new generation, I really can't say. I have to question Sanchez's assertion that the way bullying is handled now is better: "For my generation, the way to beat the popular girls and the jocks in 2019 isn’t to stoop lower than they are on the moral totem pole. Our technique is to vent on Twitter and let the likes and retweets console you. No crimes required."

In the world before smartphones and social media, there was some solace to be found from bullies because you could leave your problems at school for the evening or weekend. I’ve no doubt that there's some catharsis in Twitter rants, but consider Veronica's voiceovers, which are really her journal entries wishing death upon her bullying classmates. If it weren’t for JD, those thoughts wouldn’t have turned into action, and remained private. And that kind of public venting on social media seems like its own form of bullying.

Sanchez devotes several paragraphs to defending content warnings. What I think he fails to recognize is that the ratings system, as erratic as it is, was the content warning of its time. Heathers' R-rating is the reason I didn't see the movie until high school. Interesting to note that The Breakfast Club, which Sanchez cites as a feel-good John Hughes movie, is also rated R.

In his conclusion, Sanchez write, "After 30 years, the shocks of real life have reset the Richter scale of offensiveness. What seemed absurd in 1989 feels entirely plausible after Columbine, Parkland, and too many other school atrocities to list." After the Parkland shooting, there were red flags about the attacker's behavior that were missed. In the general population, the teen suicide rate has been on an upward trend since 2011, the rate nearly tripling among girls. To me, the most realistic part of this movie to persist in the real world is the cluelessness of the adults, and that's the greatest absurdity of all.