George Lucas punches himself in the face. 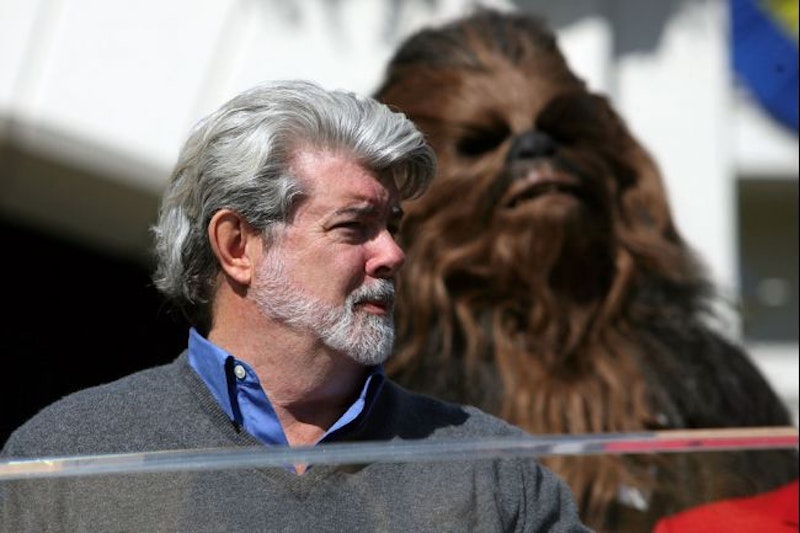 Star Wars is one of the original artistic achievements of our lifetime. The swaggering outlaw with a heart of gold, the intergalactic princess, the primitive peoples who mistake the invaders for Gods—strokes of idiosyncratic genius, never before portrayed on screen. The idea of the anonymous, little known "chosen one" who saves the world inspired everyone from J.K. Rowling to J.R.R. Tolkien, and the "dark side" of the force led Jack Kirby to invent "Darkseid" only a handful of years before Star Wars came out. Artistic integrity and uniqueness; these are the hallmarks of the Star Wars franchise, theme park, and toy line.

Perhaps you are skeptical, but George Lucas isn’t. In an already infamous Charlie Rose interview, he complained about Disney taking the franchise from him, and half-seriously compared the company's executives to "white slavers." He also said that filmmakers in the Soviet Union had more artistic freedom than filmmakers under capitalism who, he argued, “have to adhere to a very narrow line of commercialism.”

If Lucas really believes that artists under Stalin, or even Khrushchev, were living in a paradise of free expression, he needs to read a book or two. But beyond that, what's striking about Lucas' comments is his apparent belief that the commercialization of Star Wars has done him a disservice, and Star Wars has some sort of imaginable existence outside a very narrow line of commercialism.

I like Star Wars, or at least the first 2 1/2 films. But their greatness (to the extent they are great) is a function of their wholehearted embrace of the logic of the market. Star Wars is a marvel of crassness. Lucas compulsively borrowed from other filmmakers, and then just as compulsively dumbed down those borrowings for the least demanding audience member possible.

The use of John Ford's The Searchers is a particularly painful/hysterical example. In Ford's film, the burning of a white homestead by comanches is the touchstone for a complicated meditation on revenge, racism, and violence, as John Wayne's Ethan sets off to rescue his niece from the Indians—or possibly to kill her, if she hasn't remained pure. In Lucas' movie, on the other hand, Ford's harrowing image of a burned out home is just an excuse for Luke to go gallivanting off into hairsbreadth retro-serial adventures. The Searchers spends two hours documenting five years of hardship and grief sparked by the death of parents and loved ones. Star Wars spends five minutes on the same themes, before Luke trots off, never to mention his aunt and uncle again.

You could argue that Lucas cheapens everything he touches—and sure, he does. But that cheapening is part of the joy of the film. The big themes of conventionally better filmmakers are robbed of their emotional content and their difficulty, and turned into bite-sized adventurous fun. Star Wars really is a movie that seems based on its toy line, rather than the other way around. Lucas has no original ideas. He has a talent for commercialization—for chopping up other people's thoughts and gluing them together in the least challenging, shiniest, most incredibly salable way possible.

In fairness, Lucas does have another talent—collaboration. A huge part of the greatness of Star Wars is due to the puppeteers, and the designers' creation of a grimy, soiled, tangibly run-down future. The best film in the series, The Empire Strikes Back, owes much of its unexpected bleakness to director Irvin Kirshner. When Lucas seizes more control and tries to put his own individual vision across, you get atrocities like the added CGI effects in the digital rereleases of his films. Without others "ruining" his vision, Lucas has no vision—except for the bits where he's ruining someone else's.

Lucas has never been very creative or bright. That's been the very essence of his success. It's hard to imagine a person less well-situated to discuss artistic integrity and the limitations of capitalism, since Star Wars is built, first and foremost, on abandoning artistic integrity in the interest of the joyful mechanisms of the mass market. Lucas' artistic "children" are pallid John Ford rip-offs and other people's puppets. They're good rip-offs and good puppets, don't get me wrong. But it's hard to work up much indignation over the fact that he's been given billions to let other people fiddle with them.