Concussion is ugly and boring. 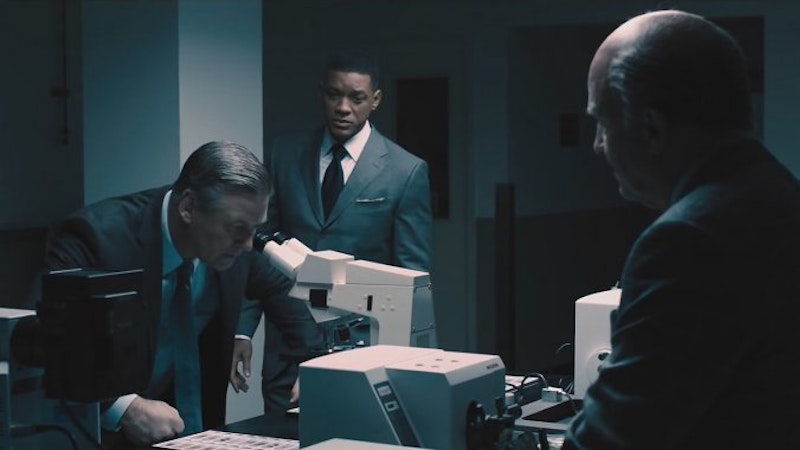 Concussion has the hallmarks of a prestige picture: released on Christmas day; features an A-list cast starring Will Smith with Albert Brooks, Alec Baldwin, Luke Wilson, and Paul Reiser; and an advertising blitz with trailers running before just about every other movie for months. Smith plays Dr. Bennet Omalu, a Nigerian forensic pathologist who was targeted and nearly ruined by the NFL after his attempts to bring attention to the large number of former football players suffering severe brain damage leading to psychosis, substance abuse, suicide, violence, and utter destitution. Set in 2002, Concussion begins with former Steelers player Mike Webster drinking liquor and huffing fumes in a pickup truck, dressed in rags, with a protruding forehead like someone with encephalitis. Webster dies, and Omalu performs his autopsy. He finds that Webster’s brain is severely damaged and diseased, full of holes like Swiss cheese. Not understanding that the NFL “owns the day of the week that the church used to own,” as Brooks’ character says, Omalu finds a pattern and gives a press conference naming the condition found in dozens of former football players as chronic traumatic encephalopathy, or CTE. Threats and attempts to discredit follow—toward the end of the movie, Omalu’s wife is tailed by an anonymous sedan in a suburban Pittsburgh neighborhood, and suffers a miscarriage soon after.

It’s a worthy subject for a big movie, and especially relevant now that more and more parents are realizing that football is an incredibly stupid sport to encourage their kids to participate in. Nevertheless, it remains the most popular and lucrative sport in the United States, and the NFL only acknowledged the existence of CTE in 2011. But the film is written and shot as if it was helmed by someone with a traumatic brain injury. It’s listless, overly serious, poorly lit, aggressively ugly, and everyone in it acts like a piece of driftwood. There’s a flimsiness to it that stinks of mid-winter dumping ground movies. There’s also no clear audience for a movie like Concussion: football fans won’t be interested, people who don’t like sports don’t want to watch a movie about sports, even though it’s ostensibly about death and disease, and anyone with money in the know probably wants to forget the existence of this movie as quickly as possible, given how heavily it indicts the NFL and our country’s continual and enthusiastic support of it.

Will Smith is insufferable as always, unable to pull off a convincing Nigerian accent, coming off like a self-righteous buffoon who’s conscious at all times that he is doing very important things. Smith is just a diva prick—the current location of the 9:30 Club in Washington, DC just turned 20, and owner Seth Hurwitz was quoted in The Washington Post recalling one day in the late-80s when Smith showed up for two sold out shows and cancelled immediately upon seeing the state of the run down, rat-infested club. So much for the fans. Smith was also booked as a guest on The Howard Stern Show in the middle of December, but cancelled at the last minute, presumably because of a riff Stern went on about how he would be as a slave master, and how he’d have Rihanna and Jada Pinkett-Smith as his slaves, and wouldn’t even force himself sexually on them. He’d ask permission. He wouldn’t even bother with cotton! It’s nice to see someone as boring and self-righteous as Smith knocked down and ignored in a garbage film like Concussion.