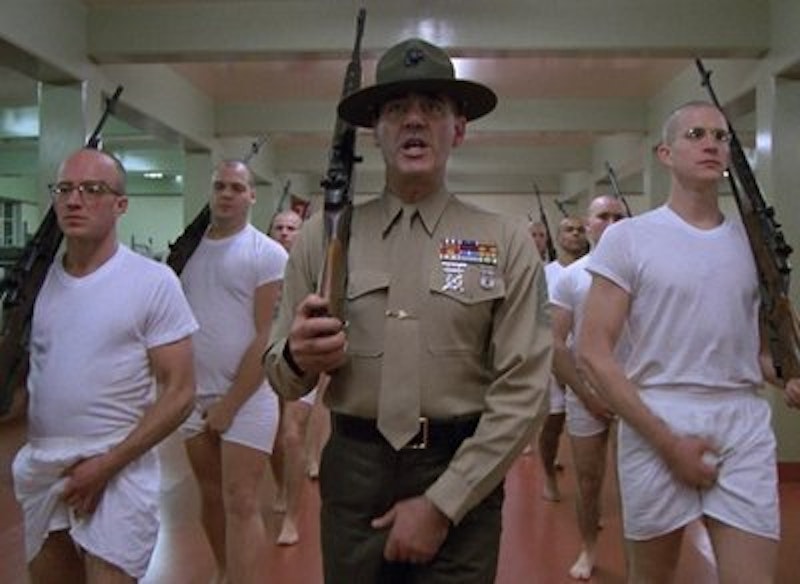 This is part of a series on latter-day U.S. colonial wars. The last installment, on Rambo II, is here.

Stanley Kubrick' s 1987 Full Metal Jacket is often considered a bitter, blackly humorous indictment of the military in general and of the Vietnam War in particular. It can also be seen as an exploitation film, which revels in the trashy violence and sex it exposes. It's no coincidence that the film is set up as two cycles of rape/revenge, in which Kubrick cheerfully conflates sadism, eroticism, and masculine panic.

The first half of the film is set in basic training. The plot focuses on Private Leonard "Gomer Pyle" Lawrence (Vincent D'Onofrio), a hapless recruit who receives unceasing, brutal, and inventive verbal and physical abuse from Sergeant Hartman (R. Lee Ermey.)

Much of the abuse Hartman metes out is explicitly or implicitly sexual. In his initial encounter with Pyle, he orders the recruit to kneel in front of him, and choke himself on Hartman's hand. Pyle's position, and his active role in being violated, suggests forced oral sex. It also, in the manner of rape, blurs the distinction between sex and violence. Hartman has the men name their rifles after women and sleep with them—again, forcing them to participate in a quasi-sexual act of humiliation. He has them march around the barracks clutching and manipulating their genitals, shouting, "This is my rifle, this is my gun!" Using a position of authority to force those under you to engage in sexual acts is sexual abuse and harassment.

In Carol Clover's 1992 monograph Men, Women and Chainsaws, in which she discusses rape/revenge films at length, she notes that cross-gender identification is central to the genre. Rape/revenge films often assume a male audience identifying with, or suffering along with, a female victim.

Men are expected to put themselves in the woman's place as she’s abused and violated; Clover notes that the genre is strongly indebted to Deliverance, in which the rape is male on male. Rape/revenge films turn men into women to exploit the perceived greater vulnerability associated with women. Then at the end, as revenge is enacted, the watching men, with the women, pick up the phallus/gun/castrating knife and wreak revenge with it. Rape/revenge is about empowerment through becoming male—though the process of empowerment is frequently in the genre both painful and perverse.

Full Metal Jacket follows the same logic, and isn't subtle about it. Hartman aggressively and deliberately refers to the soldiers under him as "ladies," and questions their manliness. In a much quoted (and probably ad-libbed) speech early in the film, Hartman screams at one of the recruits, "I bet you're the kind of guy that would fuck a person in the ass and not even have the goddamn common courtesy to give him a reach-around. I'll be watching you."

Hartman's sexual abuse means that he’s treating the soldiers like women; Pyle, as the least competent recruit, is also, by this logic, the most womanly. Tired of being punished for Pyle's failures, the rest of the troops strap him to his bunk and take turns beating him with bars of soap rolled up in towels. The fact that this occurs at night in his bed makes the connection to sexual violence clear; the participation of Pyle's buddy, Joker (Matthew Modine) is not just a lapse of friendship, then, but an intimate betrayal.

The final scene of the film’s first half is set in the barracks after dark; everyone, tellingly, is wearing underwear. Pyle, who has been driven insane by basic training, has become obsessed with caressing, cleaning, and worshipping his gun/phallic symbol. He camps out with his weapon in the bathroom—again, a place that suggests potentially eroticized nudity. He shoots Hartman and then himself while Joker looks on in horror. The violent reversal is also sexual reversal; Pyle, who was the woman being raped, becomes the man raping.

The triumph of manliness is hardly a triumph though; in becoming Hartman, Pyle becomes, like Hartman, a monster. Pyle remains a perverse figure; weak, broken, his eyes rolling up into his head in the standard Kubrick "This character is not well" way. The fact that the revenge, with rifle and gun, is male/male, also suggests in the film's logic that Pyle is not a real man; the shift from abused lady to hard guy killer has gone awry. The rape/revenge plot, meant to move viewers, and soldiers, from abused to abuser, has failed. The film, therefore, must try again.

The second half of the movie opens, famously, with a shot of actor Papillon Soo's rear as she struts down a Vietnam street, fussing with her hair and generally acting like a caricature sexy prostitute. She propositions Joker and another soldier repeating "Me so hornnnny!" in the same exaggerated style, and flipping her skirt up for a picture. The recruits who’ve landed in Vietnam, unlike Pyle, are now men; they’re able to have sex with Vietnamese women as part and parcel of being able to shoot and kill Vietnamese men. The power of the American men is emphasized in this and a later scene by their ability to negotiate; in both cases the women ask initially for $15, but are bargained down to the men's initial asking price of $5.

Animal Mother (Adam Baldwin) jokes that he will dispense with foreplay so the other men can take their turns more quickly. Various generals and enlisted men make noises about how the Americans are helping the Vietnamese, but the cavalier treatment of the sex workers, and the way the film itself fetishizes them and their disempowerment, tells a different story.

That story is elaborated in the final sequences of the film, in which Joker joins a platoon as a reporter for Stars and Stripes. The men are pinned down by sniper fire in a city; two are shot in the street, repeatedly, their bodies tearing open in slow motion as they utter cries of agony. The spraying bodily fluid and one-on-one personal vulnerability is presented as a sensual act of violence, and the platoon seeks out personal revenge.

After some searching, Joker finds the sniper and is about to shoot when the figure turns to reveal that it is a woman (Ngoc Lee). The reveal is, again, shot in slow motion. On one level, it's meant as a moment of unique horror or confusion; women, in Joker's eyes aren't supposed to fight in war—he expresses reservations, earlier, about killing women and children.

But the reveal also allows for the final, successful completion of the rape/revenge plot. The sniper, shooting the Americans, was (supposedly) a man, tearing their feminized bodies apart with a gun. When the sniper's time for death comes, though, she's a woman—and her death is presented as a conveniently heterosexual rite of passage.

Joker hesitates in shooting the sniper, but his companion pulls the trigger, and the sniper is incapacitated. Animal Mother, now the leader of the platoon after a number of deaths, plans to simply leave her there to suffer and die, but Joker is determined to put her out of her misery when she begs, "Shoot me." In a long extended moment, Joker clenches his jaw, and pulls the trigger, following which one of his companions breathes "hard core." The revenge shows Joker's mental toughness and empathy; he’s a kind killer, and one who, moreover, commits the final act with his gun in a man-on-woman context. Fire flickers behind him, as in the culmination of a ritual.

Is Full Metal Jacket critiquing the military's conflation of rape, revenge, violence and manhood? Or is it inviting viewers to invest in the sexual rush of colonialism, and the hard-core power of life and death, all the more exhilarating when wielded with mercy?

As with most exploitation cinema, the answer is a bit of both. The film is certainly aware of and criticizing the martial manliness. The last scene shows soldiers marching back to base, chanting the Mickey Mouse theme song, a comment on corporate culture and the childishness of military visions of masculinity.

But the rape/revenge narrative also has a logic, and an emotional catharsis, of its own. It's not an accident that this, one of the most famous anti-Vietnam films, makes extensive use of tropes around personal revenge just as do the famous pro-war Rambo films. American men have been defiled and feminized, and they must get back their own manhood through the deployment of eroticized power. The story is entirely about the psychodrama of the American troops; the Vietnamese figure only as barely differentiated bodies to screw or kill. Full Metal Jacket initiates its viewers into the realities of war, which are also, supposedly, the realities of being a man. That narrative is meant to be disturbing. But it's also meant to be empowering.