Film Review: War For the Planet of the Apes Isn’t Effective 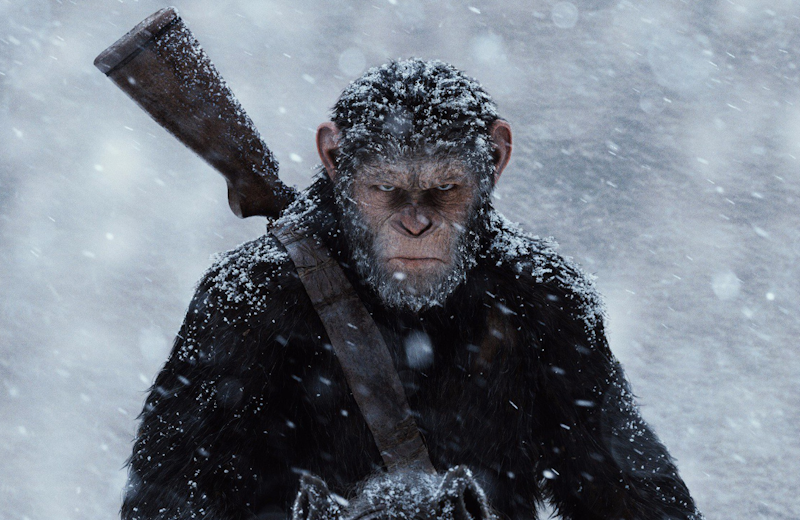 War For the Planet of the Apes, the third of the current trilogy, has received some of the summer’s most positive reviews. They’re significantly misplaced. War takes a long time to get going, isn’t as visually impressive as its predecessors and has an unsatisfactory ending. It’s the least effective of the three films.

Directed once again by the normally dependable Matt Reeves, War spends its first act entirely among the apes themselves. I found it deathly boring, despite a very good, minimalist score by Michael Giacchino. The action sequences aren’t as strong is in the previous films, either.

Each film in the series has a different human cast than the last, and this time, about an hour in, the apes confront humans led by a Colonel, who’s leading an ape prison camp. The military man is played by a very good Woody Harrelson, playing a role that’s equal parts Kilgore and Kurtz. If you didn’t get enough of Vietnam allegory featuring apes from Kong: Skull Island a few months ago, there’s more of that here, including lots of explicit references to Apocalypse Now.

The best thing about the film, as with all of them, is the lead ape Caesar, played in motion-capture glory by the great Andy Serkis. I didn’t care about the emotional journeys of any of the other apes, but I did care about him.

The best movie in the series was 2014’s Dawn of the Planet of the Apes, which centered on a tenuous piece between the apes and humans that eventually collapses and, more importantly, was a summer blockbuster that put the audience in position to root for conflict resolution and against war. That was a hard needle to thread but Reeves and the other filmmakers somehow pulled it off.

There’s a lot of speculation as to whether this latest Apes film will continue, possibly into areas in the chronology similar to those covered in the 1960s movies. I could easily see it rebounding.

War For the Planet of the Apes isn’t bad in the sense that The Mummy, Baywatch, and other terrible summer movies are bad. But it still goes down as a massive disappointment.

The Little Hours Is an Unholy Mess of the Best Kind. B+

The film, directed by Jeff Baena and based in part on Giovanni Boccaccio’s 14th-century text The Decameron, stars a virtual comedy all-star team. Alison Brie, Aubrey Plaza, and Kate Micucci are nuns, Molly Shannon their mother superior, John C. Reilly a priest, Fred Armisen as an archbishop, and Dave Franco as a stable boy. There’s even Adam Pally and Paul Reiser in tiny roles and Jemima Kirke shows up, essentially transporting her Girls character to a different country and century.

Meanwhile, Nick Offerman just about steals the film as an angry nobleman, playing off of a wonderfully deadpan Lauren Weedman as his wife, though the script gives Offerman no scenes with his old Parks & Recreation costar Plaza. Also standing out among the talented cast is Micucci, best known from the comedy duo Garfunkel and Oates, as the youngest and most “innocent” of the nuns.

The film is set at a convent in rural Italy, with Brie, Plaza, and Micucci as nuns. When Franco, fleeing the wrath of Offerman, hides out among them, leading to some very un-nun-like behavior (The Catholic League was apoplectic about the film’s Sundance premiere, which is usually a good sign).

The film drags a bit toward the end and even loses the plot a bit at times. But it’s hard to imagine a cast of that caliber not delivering huge laughs, and that’s exactly what they do.