Documentary on the author of The Anarchist Cookbook puts him on the hot seat. 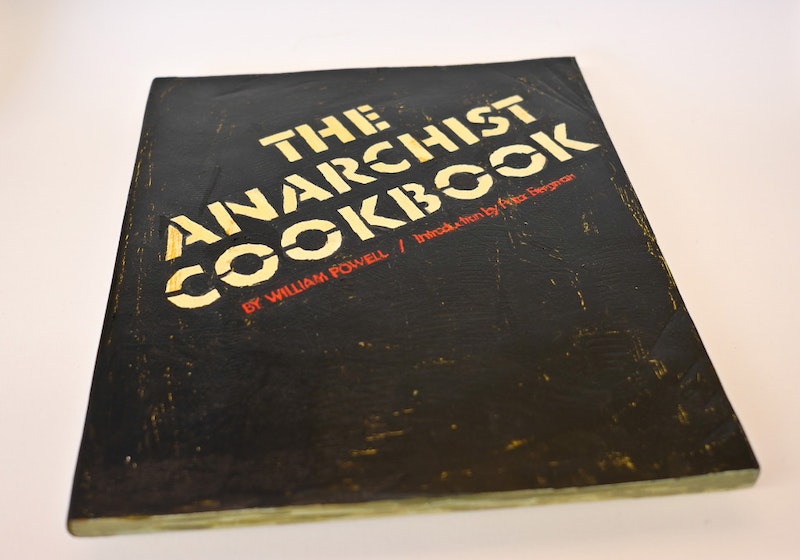 William Powell’s The Anarchist Cookbook, published in the early-1970s, provided a handbook for mayhem. If you wanted to learn how to make various explosive devices or how to turn a shotgun into a grenade launcher, this was the book. For a time, having a copy of it was de rigueur for establishing radical-leftist bona fides. Mostly the book just gathered dust, but a few—those more interested in doing rather than signifying—took it at face value and used it to blow things up and kill people.

Powell was an angry 19-year-old at the time, enraged at the Establishment and Vietnam War. He achieved fleeting counterculture celebrity status with his book, but soon dropped out of the public eye. Decades later, filmmaker Charlie Siskel caught up with the 65-year-old author and secured his cooperation in making American Anarchist, a documentary now available on Netflix. Powell died last year at 66.

The director doesn't pull any punches. In the opening scene, he tells him, “The book, as I read it, advocates the violent overthrow of the American government.” The author-turned-educator clearly wants to make some amends, but he's not about to cop to that one. “There's no call to action in the book itself,” he replies. “I don't think I hoped anyone would do anything with it,” he says of a book that contains this passage that the director has him read for the camera: “There is only one choice for a real man and that is revolution.”

A clip of a Rachel Maddow segment highlighting the numerous leftist bombings in the '70s comes on the screen, and a cop talks about how they frequently found a copy of The Anarchist Cookbook when they searched the bombers’ residences. Siskel uses old footage of street demonstrations to show how they began morphing into violent protests. Radical leader Abbie Hoffman is shown rallying a crowd with talk of “those pigs in Washington.” “We’re gonna take our fist and put it right in their fat gut,” he tells the gathering. It’s in this volatile atmosphere that Powell decided to write his book, which he sourced from information freely available in the library.

American Anarchist is an elaborate cat-and-mouse game that the sometimes reluctant-looking mouse has volunteered to play. The director’s the relentless pursuer, and the author’s constantly wriggling out of his grasp. Early on, Siskel asks Powell if he was aware that the book’s recipes for weapons and incendiary language (Powell reads some of these passages onscreen) would lead to violent acts. The author, with the camera lens right in his face, struggles for 25 seconds, but all he can come up with is, “I think I'm aware that there's certainly that possibility.”

Siskel’s obviously after a reckoning, but he's going to have to work for it. Case in point: Powell tells the director that any evil deeds his book may have inspired fills him with “remorse, which is different from regret.” Siskel asks him to clarify this, but the author demurs. He's supposed to be there to clarify complex emotions, yet he declines a perfect opportunity to do so.

Siskel’s just getting warmed up, however. Over chilling footage of the 1999 Columbine High School massacre, Powell says this was the first time he learned of a connection between The Anarchist Cookbook and violence—the teenage killers had a copy of the book. Then there's clip after clip of many other killings over the years that have been linked to the book, the worst of which was Timothy McVeigh’s 1995 Oklahoma City bombing that killed 168 people and injured over 600.

Powell has spent decades abroad since that time, and it's hard to escape the conclusion that he was running away from a big mess he'd helped create. Unfortunately, Siskel misses the opportunity to ask him about this directly, but gets in a real zinger by asking Powell why he passed up a chance to get the book out of circulation at one point, opting instead to take a $10,000 buyout from his publisher for the rights to The Anarchist Cookbook. On a teacher's salary, he explains, the money looked pretty good.

Not until the end of the film, after repeated prodding, does Siskel succeed in visibly rattling Powell. Powell, agitated, tells Siskel that it seems like he's been fishing for an answer that he's determined to get. Most viewers probably want that answer too, but they'll be denied.

Powell was done with radicalism after his revolutionary handbook was published. He ended up with a long career as an educator of adolescents with learning disabilities, doing his best year after year to distance himself from an ugly legacy. American Anarchist is a close-up study of an older man still unable to come to terms with an extraordinarily ill-considered youthful indiscretion clinging to him like a chronic disease. Powell wants understanding, but for some reason can't say he regrets writing something associated with so much tragedy.

Charlie Siskel has to practically drag concessions out of Powell, leaving the impression that the author still felt there was some justification for what he'd done, both in publishing the book and how he'd reacted once he saw the after-effects. Had William Powell known he was going to die unexpectedly about a year after American Anarchist stopped filming, perhaps he would’ve been more forthcoming.