Christopher Nolan’s new film is all spectacle and right-wing fodder. 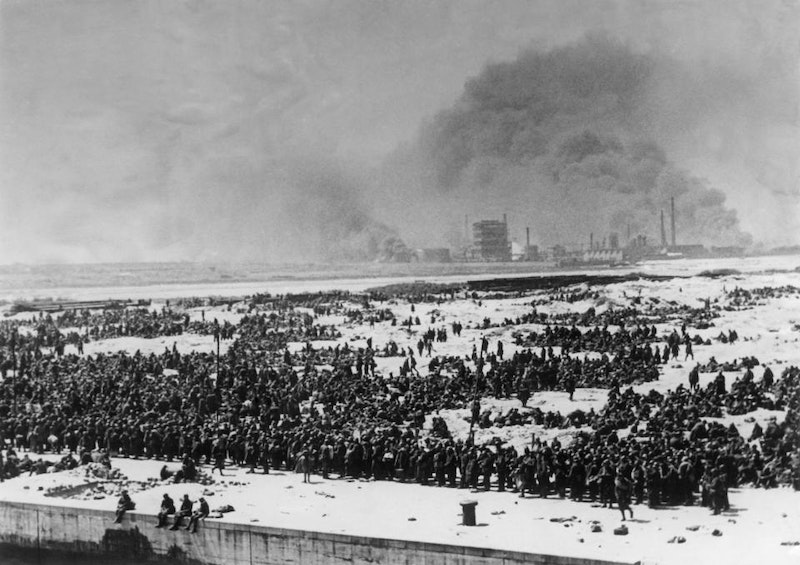 Enough of World War II. We’ve all seen it already, in countless movies, television shows, plays, commercials, documentaries… the iconography of the “last just war” is completely exhausted. It's easy to see why it’s such a popular topic to mine for material: it was a very black and white battle between good and evil. The last time war was so morally simple and justifiable. But nearly 20 years after The Thin Red Line and Saving Private Ryan, what’s left to explore? Watching Christopher Nolan’s Dunkirk, I was struck by the gorgeous cinematography and the dense and immersive sound design (something far too few directors focus on), but all it amounted to was empty bombast, rah-rah nationalism, and a complete disinterest in exploring war beyond explosions and heroes and villains. There’s very little dialogue, and most of the film takes place in the sky or out in the sea. The men look like ants from above and remain that way—no one is distinguished beyond a quickie caricature: the silent everyman, the weary general, the shell-shocked pilot, the innocent child killed by dumb luck.

Writing for The New York Times, Manhola Dargis called the film “brilliant” and its penultimate shot of a British plane in flames “indelible.” She neglected to mention the sweeping major key score on top of that shot, as if it’s something to be celebrated, some sign of relief and victory. The child-like good guys vs. bad guys world view of Dunkirk is not only stale but wildly offensive in our contemporary context: we've been embroiled in an endless “war on terror” in the Middle East for nearly 16 years now. Almost everyone agrees it was a horrible mistake that wasted trillions of dollars and killed millions of innocent people, and the absence of a draft renders the general population blissfully ignorant of the horror that veterans and military personnel still serving have to endure for no reason other than to keep the military-industrial-complex thriving. Dunkirk is an ostrich fantasy that says nothing about war today.

Professor James K. A. Smith tweeted over the weekend, “I can't be the only man for whom films like Dunkirk engender a deep existential embarrassment about the comfort & softness of my generation.” Kyle Smith, a writer for the National Review, added that “Most men of the last couple of generations have had few opportunities to prove their mettle, and proving one's mettle is part of being a man.”

What is this nonsense? Why would anyone lament being born years after conscription ended? Is war the only way to validate your masculinity? Why does masculinity have to be validated? “Toxic masculinity” is an over and oft-misused phrase, but it applies perfectly for these dolts that dream of flying fighter pilots instead of cooking hot dogs and hamburgers on their suburban decks. I know they’re ideological dinosaurs, but I can’t get over this insistence on “proving one’s mettle,” which simply means the ability to cope with stress and difficult situations. People “prove their mettle” every day, whether it’s struggling in a crippled economy, raising children, or dealing with loss and grief. The human condition demands we “prove our mettle” no matter the era. This is just more nationalistic hogwash from people that love air shows and hate Colin Kaepernick.

Dunkirk isn’t naked propaganda like Zero Dark Thirty, but its boneheaded and one-dimensional view on war is completely dissonant with where the world is now. No, this story did not need to be told again. As a subject, war is an infinite well, and we deserve more movies like Eye in the Sky and War for the Planet of the Apes that are emotionally potent and have something to say about war in the 21st century. Dunkirk, while visually and sonically spectacular, adds nothing to the conversation, and ends up fodder for pigheaded “patriots” who bitch about selfies and how we’ve gone soft. I’d rather remain soft than sunk dead in a submarine fighting someone else’s war.