It may not even be in Christopher Nolan’s top five films. A- 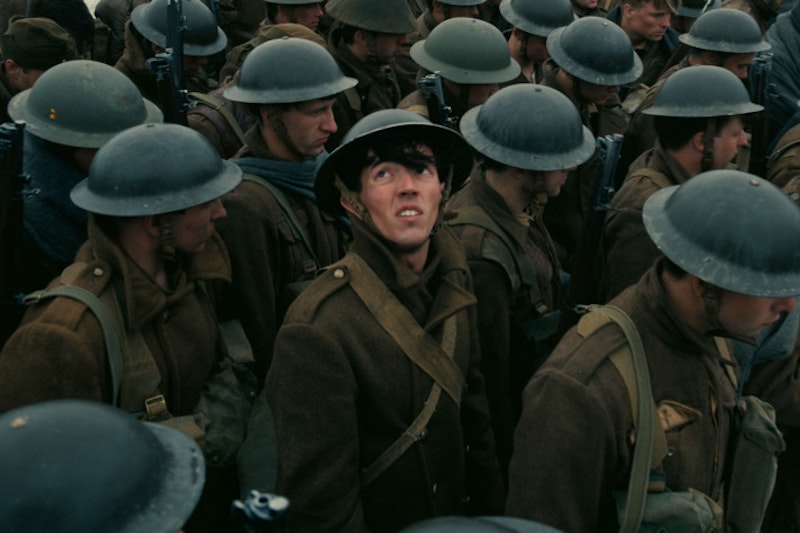 Christopher Nolan’s Dunkirk is a beautifully shot, well-acted, handsomely mounted film, a huge achievement from a master filmmaker and a first-rate team. That said, this week I’ve heard it called the best film of this year, the best war film either since Saving Private Ryan or ever, and the best film of Christopher Nolan’s career. It’s nowhere close. Notwithstanding a weak slate of summer blockbusters, 2017 is shaping up as an outstanding movie year. There have been a lot of great war films over the years and Nolan is one of our finest working filmmakers. Dunkirk is very, very good. But it’s not transcendent.

Dunkirk tells the story of the rescue, in 1940, of hundreds of thousands of British and other Allied soldiers from a French beach, as the Nazis approached. The story’s been told on film before as part of more expansive stories, including the 1942 classic Mrs. Miniver and the 2007 drama Atonement, as an astonishing sequence in an otherwise mediocre film. Nolan’s Dunkirk, though, dedicates its entire, 100-minute running time to the rescue, telling it, in non-chronological order, about the rescues from land, air, and sea. The Nazis are never seen, though their planes and boats are.

Highlights include young actor Fionn Whitehead, as well as One Direction singer Harry Styles, shining in his first movie role. Kenneth Branagh has aged into a compelling actor, and there are memorable roles for Nolan regulars like Cillian Murphy and Tom Hardy, the latter playing a pilot and once again covering his face with a mask for most of the running time. The film’s epilogue is also particularly inspired.

Dunkirk is, in just about every way, a competent and admirable achievement. It just doesn’t have that extra gear that would make it an all-time classic, or even Nolan’s best film. In fact, I’m not sure I’d even put it in the top half of the 10 Nolan-directed films (The Dark Knight, Inception, Batman Begins, and Memento are all better, and you could make an argument for The Prestige and possibly even Interstellar.)

The film doesn’t have huge flaws, but it does have some small ones. I’m not sure that setting the film non-chronologically was necessary. There’s also that Nolan/Hans Zimmer tendency to set up the sound mix in such a way that the score drowns out dialogue at various times. This isn’t Zimmer’s loudest score ever, but it’s loud enough that I couldn’t understand most of the words coming out of Mark Rylance’s mouth for much of the film.

Valerian and the City of a Thousand Planets. Grade: B-

Twenty years ago, Luc Besson directed The Fifth Element, a futuristic sci-fi space opera that combined expert world-building, gorgeous special effects, a lot of humor, an anarchic spirit, and a surprisingly poignant love story. It was a mess, but one of the more entertaining messes to grace screens in the 1990s.

Now, Besson has made Valerian and the City of a Thousand Planets, another futuristic space opera with most of those elements still in place, including the messiness. He’s created an expansive universe that’s amazing to look at, there are two or three excellent scenes, and one gets the sense this world has enough stories in it for three or four movies. It’s too bad the story this one chose to tell is so weak and derivative.

Valerian, which Besson wrote and directed, is set centuries in the future, with most of the action taking place on an international space station which has gradually expanded, with every alien race joining up to combine their worldly knowledge, a premise that sets up a chance at political allegory that the film never really pursues. Dane DeHaan plays the titular space adventurer, forever flirting with his partner Laureline (Cara Delevigne), and they’re on the trail of a particularly interesting McGuffin—a cute living creature which, literally, shits pearls.

The best thing about the film is its look. Besson self-funded (and crowdfunded) the film’s nine-figure budget, making it the most expensive independent film of all time, and let’s just say all that money is on screen. The space scenes look amazing, as do various landscapes and even certain Holodeck-style simulations. It’s the best looking movie of the summer.

But the film takes an uncomfortably long time to establish its stakes. The plot is both incomprehensible and not especially interesting. One plot, about a race of tall, thin and blue aliens robbed of their home planet, seems lifted wholly from Avatar, so don’t ever say again that James Cameron’s movie didn’t have any lasting influence. Other elements seem influenced at various times by different aspects of the Star Wars and Star Trek canons. Also, the quality differs wildly from scene to scene and segment to segment. The best stretch concerns a visit to a space-aged brothel, featuring Ethan Hawke as a piano-playing pimp and Rihanna as a shape-shifting entertainer who serves as counterpart to the singing alien Diva from The Fifth Element. The action sequence following it isn’t far behind. Rihanna’s character’s arc is much more compelling than that of the protagonists that I wish the movie had been about her.

When I first heard about this movie my greatest skepticism had to do with the two leads. DeHaan, in just about every movie I’ve seen him in, has been a complete non-entity, with a black hole where his presence and charisma should be. Delevigne, meanwhile, is much more a model than actress, whose most prominent movie role before now was as The Enchantress in last year’s Suicide Squad, one of the least convincing villains in the history of the superhero genre.

I was half right. While Delevigne is something of a pleasant surprise, DeHaan is as vacant and unimpressive as usual, and also plays the part with an exaggerated dude-bro accent that makes it sound like he’s channeling Point Break-era Keanu Reeves. I still can’t tell if he was playing it straight or trying to make some half-hearted satirical point about the empty machismo of such Han Solo-knockoff characters.

Will Valerian become the sort of cult classic that The Fifth Element has? It may: the visuals are that great. But it’s not nearly as light-spirited or funny. And unfortunately, DeHaan is no Bruce Willis.

A Ghost Story. A-

Here’s a film that’s such a simple, wonderful idea, executed perfectly: Casey Affleck and Rooney Mara are a couple. Affleck dies five minutes into the movie, and returns as a ghost, covered in a bedsheet, and “haunts” his former home for the rest of the film. A Ghost Story is not a horror movie and there’s virtually no sci-fi or special effects, and it isn’t bound to any particular genre conventions. It was directed by David Lowery, looking to do something smaller following last year’s big-budget Disney film Pete’s Dragon.

In fact, the film is silent most of the way through, aside from one party scene in which a guest (indie rocker Will Oldham) gives a long, extravagantly pretentious monologue. And it all leads up to a third-act twist that makes the film way deeper and more poignant than it was before.

Dunkirk and Valerian are both big, loud, and expensive. If you’re looking for something quieter and more minimalist, A Ghost Story is worth a watch.