The hero of our longest war. 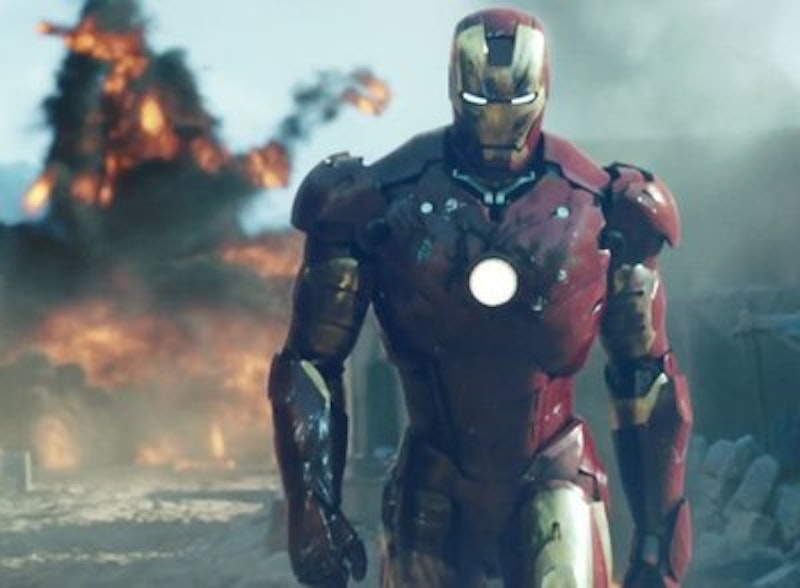 This is part of a series on latter-day U.S. colonial wars. The previous installment, on Three Kings, is here.

The longest war in United States history hasn't inspired many important films. The one iconic exception proves the rule. The most influential and successful film about the Afghan war isn't a war film. It's a superhero movie: Iron Man, the 2008 blockbuster that launched the commercial juggernaut of the Marvel Cinematic Universe.

That Iron Man is the Afghan War film is telling. The film is about mega-wealthy arms dealer and playboy Tony Stark (Robert Downey, Jr.), who’s captured by Afghan fighters while in the country to sell his latest weapons system. The first quarter of the movie involves Stark building his first prototype Iron Man suit to escape captivity. The bulk of the film, though, is set in the United States, as Tony perfects his suit and struggles with his partner/nemesis Obadiah Stane (Jeff Bridges).

The Afghan war is the background to the personal growth and corporate manipulations of America; it’s not important in itself. And the particulars of the war are almost entirely erased. World War II films, whatever their liberties with history, are generally clear that the Nazis are the enemy. Vietnam films know that the enemy was the North Vietnamese and the Viet Cong.

But in Iron Man, the enemy is… who? The people who kidnap Tony aren't Taliban fighters. They don't have any particular nationalist, religious, or ideological commitments. They’re presented more as standard issue bad guy thugs, obsessed with territorial conquest—as if it is they, and not the United States, engaged in a war on someone else's land. The specific evil of the Taliban dissipates into gangster tropes and generalized superhero comic clichés. Iron Man shows his heroism by swooping into an Afghan village to wipe out the bad guys, whoever they are, just as America shows its heroism by drone strikes on Afghan villages that wipe out the bad guys—or wedding parties. The specifics are studiously glossed over, lest American audiences be forced to think for even an instant about Afghanistan, or what Americans are doing there. Never mind all that, the film says. Let's think about superheroes instead.

But even as it forgets the conflict it's purportedly talking about, Iron Man also shows how important that background of war is, and has been, to the superhero genre. The first massive superhero boom, in comics, began during World War II, as war with Nazi Germany loomed over Europe and the United States. The second, longer, and more lucrative boom began after 9/11. The presence of evil enemies abroad forges superheroes, just as Tony Stark hammers his Iron Man suit in the Afghan cave. Iron Man embodies American technical know-how and military dominance; he's the power of the United States, humanized with quips and appealing inner struggle. Tony, like the United States, is not perfect. But he, like the United States, does the right thing in the end.

What that right thing is, and how Tony does it, is very carefully defined in Iron Man. The film recognizes that dealing arms and building weapons is morally tainted. But that moral taint is separated from any possible questions about American foreign policy righteousness.

Stark Industries is compromised not because it sells weapons to the American military, but because (unbeknownst to Stark) it sells weapons to the Afghan opposition. That opposition is solely to blame for the suffering to the Afghan people. An Afghan engineer who has also been captured by Afghan fighters tells Stark his family was killed in the war. But he never blames Stark for aiding and abetting the conflict. On the contrary, he sacrifices his life for Stark, dying so that the American billionaire arms dealer can feel good about himself.

Stark decides to stop producing weapons when he returns home. But the decision is made because he’s disturbed that anti-American forces have obtained his weapons, not because he's questioning America's decision to wage war forever in the region. Tony eventually figures out that Obadiah has betrayed him, and is funneling munitions to the Afghan forces. The final battle pits patriotic Stark, who will only sell weapons to America, against the betrayer Obadiah, who aligns himself with anti-U.S. forces. Tony's victory over the insane, bearded warmonger with the vaguely religious name is a victory for America. A film about the moral failures of arms dealers becomes, with breathtaking insouciance, a rah-rah metaphor for the victory of American arms in Afghanistan.

Iron Man emits a vague cloud of moral complexity as cover for a celebration of American weaponry and superpowers. Both the cloud and the celebration have remained popular a decade later. Both are still visible, for example, in Captain America: Civil War, in which superheroes of good will occasionally hurt innocents while trying to protect more innocents. Captain America insists that the powerful need to be unconstrained in their pursuit of good; Iron Man says that do-gooders should be accountable to the world community. The question of whether superhero intentions are actually altruistic is never broached. Are we bombing Afghans to help them? Are we bombing them out of revenge, for geopolitical advantage, or just out of inertia, because we're there and have the weapons and once you've been at war for 17 years, why stop?

A debate about imperialism that starts with the assumption that Captain America always tries to do what's right is a debate about imperialism that cedes most of the ground to the interventionists before it starts. Power is fun. Powerful people are the good guys. Let's fly out into the world and kick some swarthy bad-guy butt. That's the message of Iron Man, of the MCU, and of American foreign policy. The last doesn't look set to change anytime soon, which means superhero films, and the Afghan war, are likely to be with us for some time to come.