Snore on the Water

Todd Haynes’ new film is a boring failure about an important subject. D 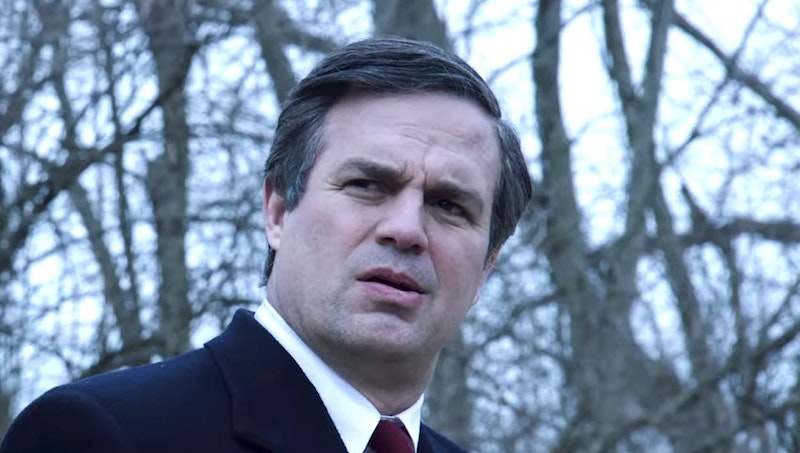 Why is a director as original and distinctive as Todd Haynes wasting time with assignment work like Dark Waters? He’s an important American director capable of much more than this nonsense. Work for hire by auteurs isn’t always bad, and with someone else, maybe I wouldn’t be so harsh. But I love Haynes’ films—Carol and Safe especially—and even when he turns in something minor like Wonderstruck, it’s still in the same key. I have problems with Velvet Goldmine, and I think the best movie ever made about Bob Dylan is somewhere in the M.C. Esher mess of I’m Not There, but they’re original, compelling films with a lot to consider and to keep. There aren’t many American auteurs of Haynes’ peer group left: Todd Solondz emerges from the gutters of NYU every three or four years with some new perversion that almost no one sees, Gus Van Sant and Richard Linklater have been striking out for five years, and Spike Jonze hasn’t been interesting since his last movie written by Charlie Kaufman.

Dark Waters is the kind of project that a director takes on to settle past debts, curry favor with financiers for another film they want to make, fulfill contractual obligations, or as a work exercise. Superficially, Dark Waters has a lot in common with last month’s The Report (almost a Deep Impact/Armageddon situation), and I’m shocked that the latter is superior. The Haynes film is such a failure that it actually clarifies what was successful about the otherwise unremarkable The Report: how do you dramatize bureaucrats digging through documents over decades? As I wrote in my review, Scott Z. Burns’ direction in The Report was brisk and surprisingly compelling for a movie where, as Mark Kermode put it, a handful of cops entering a room full of computers is a huge dramatic moment. But it works. It doesn’t in Haynes’ film.

Mark Ruffalo stars as Robert Bilott, a corporate lawyer in Cincinnati (with roots in West Virginia, so naturally he’s negged by his effete colleagues who came from more money, went to better schools). His company’s biggest client is DuPont, and when the movie begins in 1998, everything in Bilott’s life comes to a head: a friend of his “grammers” back home wants to know why all of his cows are dying and his family and friends are getting sick from the groundwater. And so begins the odyssey of Robert Bilott, a principled man who spots corruption and cruelty in “the system” just like Dan Jones in The Report (played by Adam Driver). Jones fought to reveal the specifics of post-9/11 torture programs, and Bilott fought to stop DuPont from poisoning people and to get them to pay restitution. In Dark Waters, we learn that the production of Teflon produces toxic waste that the human body cannot break down, and that the people living near certain DuPont factories were bound to suffer cancer, chronic illness, and birth defects. Some of DuPont’s victims are featured in the film (like Bucky, born with one nostril).

Both films fight against cruel and faceless villains dispersed through an invisible bureaucracy that wants to drain you and make you tired so you give up. A series of title cards at the end of Dark Waters let us know that Bilott managed to stick it out until DuPont finally settled with everyone involved, even if the total money spent was a pittance for the chemical giant. And Haynes’ film feels like a continuation of that: Dark Waters is so thoroughly unremarkable and boring that one suspects DuPont might’ve help co-finance it. Why not a little kayfabe and media confusion? This whole C8 business is ongoing, the film only ends in 2015. The presence of “forever chemicals” is as imminent a problem for public health as the government malfeasance and war crimes exposed in The Report. Burns’ film is simply better at making a dull but important subject entertaining, and this is despite drawn out and unnecessary recreations of torture at CIA black sites. Driver is on a roll right now and can pull off just about anything; while Ruffalo is usually good or at least okay, here he gets irritating, and it all feels like a rerun of Spotlight. That was a good movie but I wish it didn’t inspire so many copycats like this.

The subject and subject matter of Dark Waters deserve to be explored, filmed, seen, and discussed by every person in America. Unfortunately, this movie might be the worst way into the subject. Besides failing the considerable task of making a man spending nearly 20 years digging through documents, staying up too late, having stern meetings with bosses and management, and visits with the victims in West Virginia into an interesting film—Haynes is completely passive, showing no passion or aesthetic curiosity. Maybe he had one left on his contract, but otherwise… it makes no sense. Wonderstruck was a well-intentioned but light work with a stunning and distinctly Haynesian sequence at the end featuring a miniature Manhattan and Julianne Moore.

There is nothing of Haynes in Dark Waters, and beyond that, every major performance either sucks (Ruffalo, Anne Hathaway, Victor Garber) or is so completely phoned in and in the actor’s wheelhouse that it doesn’t matter (Tim Robbins, Bill Camp). Only Bill Pullman distinguishes himself with a ridiculous Southern Baptist lawyer routine—all very “I do declare”—that’s so over the top and camp that I might have to reconsider what I said about Haynes’ absence in this film. But it doesn’t scan as a quirk so much as a mistake, a miscalculation in an otherwise much less interesting movie. Dark Waters could use more of the silliness that Pullman has in spades. But this film just plugs, and slogs, and ploughs its way through very boring material without any enthusiasm or creativity. I expect this at the multiplex. I don’t expect it from the guy that made Carol and Safe.