Fans of entertainment and political media will enjoy Bombshell, others might find the tone confusing. B 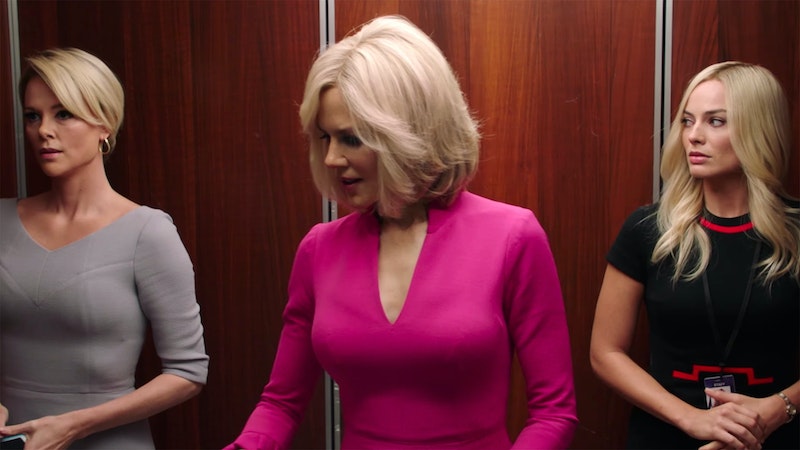 Bombshell, the new film from director Jay Roach chronicling the fall of longtime Fox News honcho Roger Ailes, is massively entertaining for the entire time you're watching it, but once you're done you realize it was kind of a mess. On the positive side, the film is filled top-to-bottom with strong performances, including Charlize Theron and Nicole Kidman doing dead-on impressions of then-Fox News anchors Megyn Kelly and Gretchen Carlson, respectively, and is full of fine brief turns by recognizable actors in small parts.

The film succeeds in making Fox News look like probably the most toxic workplace that's ever existed, one where characters keep saying "I'm not a feminist," when the circumstances dictate that they perhaps ought to be. On the other hand, Bombshell is filled with jarring tonal shifts, and consists of many elements that don't fit together.

Bombshell is set throughout 2015 and 2016, against the backdrop of Donald Trump's rise in the Republican primaries. Theron plays Kelly, the rising star in Fox's primetime lineup, while Kidman is Carlson, who was exiled from the Fox & Friends morning show to mid-day and went on to sue Ailes for millions. The third lead, Margot Robbie, plays a fictitious composite character, a Tomi Lahren-like airhead who first introduces herself as "an influencer in the Jesus space," and is looking to rise fast at Fox.

John Lithgow, in a fat suit, plays Ailes, which is a tricky role, since it's hard to play this racist, conspiracy-mongering sexual predator without seeming over the top. Meanwhile, Malcolm McDowell, in a perfect bit of casting, turns up briefly as Rupert Murdoch. The biggest weakness of Bombshell is that the tone is all over the place. It's at times a serious movie about a foul sexual predator's reign of terror, at other times a scabrous satire. And at other times—especially whenever a famous actor shows up portraying a recognizable real-life figure, it resembles a political cold open on Saturday Night Live. Except much funnier, as Lorne Michaels would never think to bring in Richard Kind to play Rudy Giuliani.

SNL’s actual Rudy, Kate McKinnon, shows up here as well, as a Fox News employee, and a scene between her and Robbie is the best in the movie, if only for a line McKinnon says about how they think of the typical Fox News viewer as having the cultural worldview of "an Irish beat cop." That scene, however, feels like it's from a completely different movie.

Donald Trump appears only in archival footage, but the film has plenty to say about his ascension, most notably in that Fox News threw their own public-facing employee, Kelly, under the bus when he was feuding with her. Also, we see a succession of future MAGA celebrities—Kimberly Guilfoyle, Jeanine Pirro, Rudy—behaving like monsters, as they aggressively go to bat for their serial sexual harasser of a boss, something they'd be doing even more of a couple of years later.

The combination of broad comedy and political storytelling is perhaps not a surprise coming from director Roach, who’s best known for directing all three Austin Powers movies, and also several fact-based political movies for HBO (Recount, Game Change, and All the Way), in addition to such big screen disasters as Trumbo, Dinner For Schmucks and The Campaign.

Bombshell is more along the lines of his HBO material, especially Recount, as it's a breezy dramatization of recent history with overqualified actors in most of the parts. In terms of the overall Roger Ailes Cinematic Universe, Bombshell follows both a first-rate documentary last year called Divide and Conquer, and The Loudest Voice, this year's Showtime mini-series based on the reporting of Gabriel Sherman, who wrote a book about Ailes and broke several of the major harassment stories.

Featuring a loud, bilious performance by a fat-suited Russell Crowe, the Showtime show was uneven but enjoyable. The new movie is stronger all around and does a much better job getting the performers to actually look like their counterparts, as Naomi Watts was never believable for a second as Gretchen Carlson in the Showtime version. If you're someone who follows media scandals closely, you're likely to enjoy Bombshell. Just know that the tone might give you whiplash.