I’m Still Here is the best American film of the 2010s. 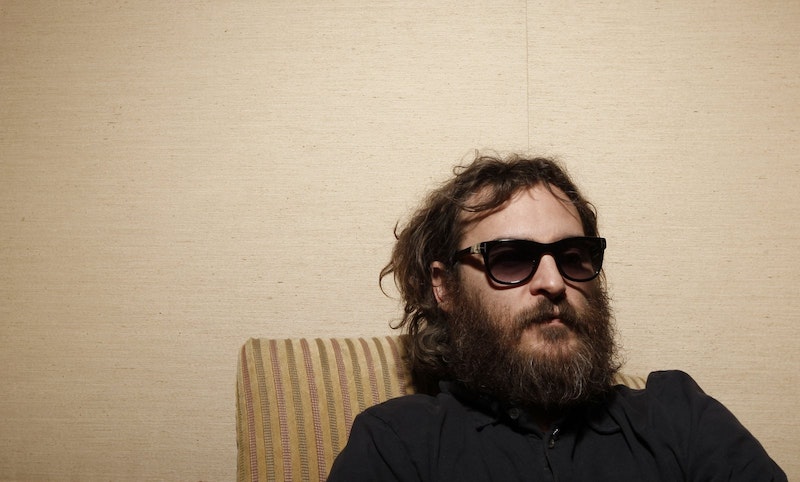 The best American film of the decade begins in Panama: home video from the early-1980s, a boy at the top of a waterfall and his father watching below, waiting for him to jump. It’s a young Joaquin Phoenix (then known as Leaf), and at the end of this extraordinary film I’m Still Here, he flies to Panama and recreates the scene exactly—with director Casey Affleck’s dad playing Phoenix’s dad. Before diving into the hyperreal, back to the beginning: when young Joaquin finally does jump, we’re plunged into an abyss of television screens all showing different broadcasts and reports on the 2006 Oscars ceremony. Joaquin Phoenix won Best Actor that year for playing Johnny Cash in Walk the Line, and he looked like a different person: pudgier, fresh-faced, not all that interesting. But we see him win, and entertainment anchors reporting on his win, and then subsequent appearances on talk shows, red carpet interviews, and press junkets. And then we cut to the hills above Los Angeles, a burly man in a dirty blue hoodie with his back to the camera mumbling about being misunderstood and constrained by category.

“I’m just fucking stuck in this ridiculous self-imposed prison of characterization. And it happened to me young. I don’t know what came first, whether they said I was emotional and intense and complicated, or whether I was truly complicated and intense and then they responded to it, and then once they responded to it, then I responded to what they were saying, and yeah I utilized in some ways, and I am embarrassed about that, it’s why I agreed to do this documentary, because I don’t want to play the character of Joaquin anymore. I want to be whatever I am. My artistic output thus far, when I’m really fucking honest with myself, has been fucking fraudulent. Now for the first time I’m doing something that, whether you like it or not, really represents me. And maybe that’s fucking stupid to want to be represented, to care, I don’t care, it’s not that. Hate me or like me, just don’t misunderstand me. That’s it.”

No other film this decade got its grip on social media and its funhouse mirrors of refracted representation. Released in September 2010 to little acclaim or fanfare, I’m Still Here itself almost felt like an anti-climax after two years of media kayfabe. Years before Donald Trump utilized pro-wrestling strategies and completely flummoxed candidates and reporters who disdained the vulgarities of “flyover country,” Phoenix and Affleck were able to pull off a two year performance piece without being fully exposed because the entertainment press had no idea how to handle the hyperreal of Phoenix’s performance: using real red carpets and television reporters as props and elements to play off of. It seems like a good way to burn through interminable interviews.

Discouraged by the type-casting and pressure that followed his Oscar win in 2006, he decided to put his career on the line by using mainstream media and major television appearances as a stage for performance art with a level of commitment not seen since Andy Kaufman. If you were an American media consumer in the late-2000s, Phoenix’s passion play was on prime time along with befuddled anchors frustrated by a joke they’re clearly not in on. The most stunning moment in I’m Still Here comes early on, when Affleck’s cameras follow Phoenix on the red carpet at the premiere of James Gray’s Two Lovers. Bearded, disheveled, mumbling, he’s suddenly accosted by Entertainment Tonight.

They ask him what’s next. We’re still seeing through Affleck’s cameras, but as Phoenix tells them that he’s retiring from acting effective immediately, the movie cuts to the actual episode of Entertainment Tonight, collapsing the distance between an offhand comment reported as a sensation. Frequently, the film cuts to broadcasts and articles on the Internet about the film itself, and whether or not it’s a hoax. Halfway through, Phoenix’s assistant has a conversation with him about it. Chain-smoking in his home studio, he decides he needs to get serious about his new rap career. He’s going to work with P. Diddy, one of the few people who was in on the joke and was an especially enthusiastic collaborator (around the same time, he gave a hilarious and severe performance in Get Him to the Greek).

Phoenix’s hip-hop aspirations are the only thing that’s dated from this movie, made when Barack Obama was elected for the first time and years before social media was ubiquitous. What flummoxed the press and most of the public in 2009 (especially after his infamous Letterman interview that comes at the climax of I’m Still Here) would be recognized and called out immediately today. There were leaks in 2008, and whenever Shia LaBeouf has attempted to do even more avant-garde stunts than this, he’s widely mocked and the work itself is either sabotaged or dismissed. I’m Still Here rides the bleeding edge of the speed at which news travels now. By the time the movie came out, not many people cared, and Phoenix came back stronger than ever from “retirement” to become the most ambitious American actor of the decade. Freddy Quell, the role of a lifetime, came just two years later.

The legacy of I’m Still Here isn’t the film itself but the various media it contaminated: the Letterman interview, the disastrous performance in Miami, the anguished CAA agents begging Phoenix to reconsider retirement. Again, these people wouldn’t be kept in the dark today. It’d be impossible: performance art stunts like I’m Still Here became really popular this decade, and it presaged a new kind of expression and performance that’s more open and critical than simple auto-fiction. In his quest to find purpose as an actor, “an artist,” Phoenix implicated the American media and entertainment press in a critique of a system that distorts, exploits, and destroys people. I’m Still Here is a thoroughly political film, more than any Bush era period piece or “ripped from the headlines” McKay/Roach project. Using himself as a battering ram, Phoenix exposed from the inside out how junk media is made and manipulated. If he hadn’t had such an impressive string of performances from 2012 all the way up to this year’s Joker, Phoenix probably would’ve been banished by an industry that doesn’t like to be mocked or fooled, however mildly. I’m Still Here is an ur-document of Instagram influencers and TikTok filmmakers, and its critique and exploration of “fake news” is more relevant than ever.