1998 film is dated despite its reputation. 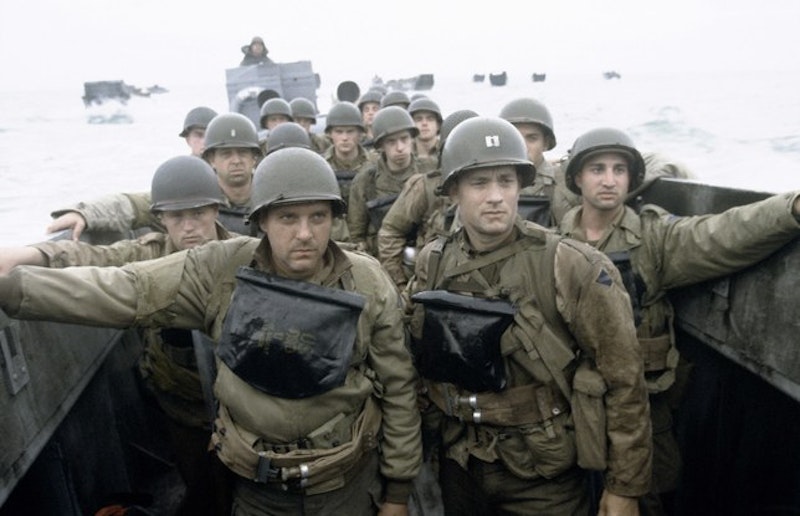 Not long ago it was reported that Tom Hanks is working on a new project with Dale Dye. Dye, a former Marine Corps captain, is writing and directing a movie about D-Day, No Better Place to Die, which Hanks will star in and executive produce. This is of interest to some because they once worked together on another movie about the Second World War, Steven Spielberg’s Saving Private Ryan. Dye, a novelist, magazine writer, and occasional actor, founded and runs Warriors, Inc., a company that provides technical advice to Hollywood productions seeking realism in their military scenes, and is particularly known for putting actors through simulated boot camps, including Hanks in Ryan.

The articles about Dye’s projected movie (he hopes to start filming this summer) all mentioned the Ryan connection. On one level, this is understandable: it was a movie that made money and that people remember 20 years after it came out. But it’s surprising to me how well-regarded Saving Private Ryan is, given that it’s not very good.

Ryan gets praised for the technical competency of its first 20-odd minutes depicting the assault on the beaches of Normandy. That’s a sign of how weak the rest of it is: most of the movie doesn’t get praised, just the first fifth or so. I find the D-Day sequence a wearying, pointless exercise, as realism often is, especially on a movie screen. Spielberg’s characteristic lack of subtlety actually works at the start, but soon becomes tedious. The scene takes too long for too little narrative point. But then when the plot finally does kick in, things get worse.

The idea’s simple enough: having survived D-Day, Tom Hanks leads a small group of men across war-torn France to find one Private Ryan, whose three brothers have all been killed in battle. The surviving Ryan gets to come home, but not before a climactic battle scene.

Various articles say that the story’s based on the true case of the Niland brothers. Four Niland brothers fought for the United States in World War Two, three were killed or presumed killed in a short span of time, and the fourth was sent home. The problem is, there was no Tom Hanks in real life, no mission of grumbling soldiers crossing France to seek a single GI. The surviving Niland was briefly lost in France—a paratrooper, his plane was shot down the night before the D-Day attack—but he made his way back to his unit after the battle and was promptly ordered to the home front.

In other words: the heart of the movie is fiction. There was no unit sent on a dangerous quest to recover a single NCO. There was no heroic sacrifice of six men for the sake of one. The uplifting core of the film simply never happened. It’s not unreasonable to call this story propaganda, as unrealistic and flat as propaganda usually is.

Or, you could call it counter-propaganda. Deliberately or not, Spielberg’s film plays as an unsuccessful parody of a far better picture, Apocalypse Now. Both movies are about small American military units led by a somewhat mysterious officer, travelling across war-torn countries where the United States is involved in a massive conflict. Apocalypse Now sends a killer out to assassinate a former colonel. Saving Private Ryan sends a schoolteacher out to save a private. Apocalypse Now subverts the military ethos. Ryan praises it.

The characters of Apocalypse Now are often-demented intellectuals, the characters of Private Ryan stock types from a pulp-fiction view of the 1940s. Francis Ford Coppola’s film is a hallucination about the collapse of the chain of command, order, and sanity. Spielberg’s film is an ode to the spirit of sacrifice, a sanitised assertion that nobility is part of the structure of war—Hanks follows orders to save a man’s life, and his men lay down their lives as required for a mission that makes no strategic or tactical sense (and never happened). To me, Private Ryan’s a desperate claim that Apocalypse Now isn’t true, a dishonest attempt to make viewers feel good about war.

The character-writing is clunky, the dialogue something out of a 1940s-era war movie. Not a good one, either. The film’s vaguely aware of sex, but women have far less of a role here than even in Apocalypse Now. It’s a sepia-toned piece of faux-nostalgia about masculinity and violence masquerading as tragedy. It’s a far less accomplished piece of filmmaking and of screenwriting than, say, the same year’s Shakespeare in Love.

Which may be an unfair comparison. Shakespeare in Love won the Oscar for Best Picture that year. It’s a legitimately bittersweet, witty film about recognizable human beings and great art; an entertainment, but a thoughtful and well-crafted one. Private Ryan is a hollow exercise of craft, the theme at its center vacuous at best. Hanks urges us to be worthy of the sacrifice of the soldiers of World War II—but worthy how? It’s an idea so vague it could mean anything, giving the audience license to feel righteous while doing nothing to deserve it. It’s easy to imagine someone feeling unjustified reverence at the idea of Hanks’ fictional sacrifice while at the same time voting for a right-wing nationalist authoritarian. Since Private Ryan was released we’ve seen the rise of militarism in the United States, and lately the rise of something disturbingly like fascism. All told, Ryan is more on the side of militarism than it is against it.