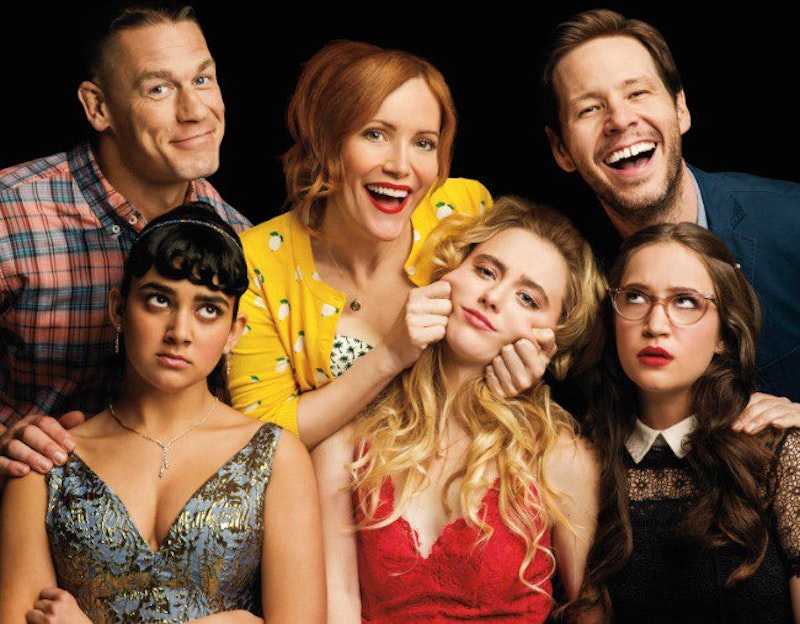 Hollywood’s churned out a steady supply of raunchy comedies in the past two decades, usually directed by the Farrelly Brothers or Judd Apatow, in which the dialogue is raunchy, the nudity and sexuality explicit, and the primary narrative drive and audience sympathy is with the male protagonists trying to get laid. In these films, the envelope is pushed ever further—only to inevitably land with a third act that affirms the superiority of bourgeois values. Flying bodily fluids notwithstanding, the conclusion is always in favor of monogamy, the traditional family, and bros-before-hos male friendship.

If Superbad, 11 years ago, was a step forward for this genre, the new comedy Blockers is a leap: not only does it make the protagonists girls, but it actually centers teenaged female sexuality, with the boys practically bystanders. It interrogates assumptions held by decades of teen sex comedies, as well as films of various other genres. And it does this while co-starring Apatow’s wife (Leslie Mann)—while its producers include Superbad writers Seth Rogen and Evan Goldberg.

Despite the film’s somewhat misleading marketing campaign, the film is clearly on the kids’ side. It takes for granted that girls who seniors in high school want to have sex, and that in taking extraordinary measures to stop them, their parents are being irrational and ridiculous.

The directorial debut of Kay Cannon, the longtime 30 Rock writer who also wrote all three Pitch Perfect movies, Blockers’ logline sounds like “Superbad With Girls,” but it’s really much more than that. Three teen girls (Kathryn Newton, Geraldine Viswanathan and Gideon Adlon) make a pact to each lose their virginity on prom night. One of each of their parents (Mann, John Cena and Ike Barinholtz) get wind of the plan, so they embark on a lunatic, nightlong, doomed quest of running around the greater Chicago area (actually Atlanta) to protect their girls’ chastity.

What results is a series of elaborate, silly setpieces, most of which consist of over-the-top physical comedy by Cena. Some are funnier than others, but more of the film’s successful humor is derived from character and dialogue. There’s one line, about Mounds and Mars Bars, that’s so out of nowhere that I’m still giggling about it days later.

It’s kind of revolutionary that the boyfriend characters are each ciphers with about one character trait apiece, in the tradition of the girlfriends in most pre-Superbad teen sex comedies. And the film’s pretty progressive about drug use too. It would’ve been unheard of, until a year or two ago, for a teenage male character in a mainstream studio comedy to be established as a manufacturer of various, non-weed drugs, without being depicted as a predator or villain.

What really brings the film into another gear is the casting of the three girls. Kathryn Newton, who you may recognize as Frances McDormand’s doomed daughter from the flashback scene in Three Billboards, shines as Mann’s daughter, a prom queen type, while Viswanathan, in her first movie, is a truly original character. But Gideon Adlon, playing a nerdy girl with a secret, is the movie’s surprise MVP.

As for the adults, Cena is very funny, as it’s clear he’s much better suited to comedy than to action hero duties, although it’s amusing that he’s appearing in this hard-R teen sex comedy just a couple of weeks after hosting Nickelodeon’s Kid Choice Awards, a gig that didn’t allow him to mention this project. And just as every time Arnold Schwarzenegger appeared in a comedy, it’s jarring to see a man as cartoonishly jacked as Cena portraying a normal guy with a normal job that isn’t “professional wrestler.”

Barinholtz is one of those performers where a little bit goes a long way, but he’s fine here, and gets a couple of sweet, emotional monologues. As for Mann, she plays a gear that’s beyond the one-note shrillness she’s required to use in movies directed by her husband. Meanwhile, Gary Cole and Gina Gershon steal a couple of scenes as a pair of parents with a healthier attitude towards sexuality than the other adults in the movie.

It’s great to see a movie getting away from the creepy, unquestioned assumption that a father’s job is to take extraordinary measures to guard his daughter’s chastity. And this attitude isn’t confined to teen comedies. Three Days to Kill, the 2014 Taken knockoff that starred Kevin Costner, applied higher stakes to the preservation of the daughter character’s virginity than the nuclear smuggling plot that was going on.

Blockers doesn’t exist as a heavy-handed woke parable. It’s a comedy first—and a very funny one at that.

ACORN and the Firestorm. B-

Hey, remember ACORN? It was a street-level social justice and community organizing outfit, which helped poor people battle crooked landlords. They operated, unglamorously, out of dingy offices and mostly fought political battles that they didn’t win.

If you’re a Fox News or Breitbart fan, you may also remember ACORN as a nefarious organization that carried out massive voter fraud on behalf of Barack Obama and also directly helped pimps and prostitutes.

ACORN and the Firestorm is a documentary that tells the story of ACORN’s sudden death, early in the Obama years. It’s no great shakes, but does put together a compelling story that was in many ways a precursor for the Trump era.

The “ACORN scandal” was actually a couple of different “scandals.” In one, the organization was accused of “voter registration fraud,” which was portrayed in the conservative media as voter fraud, but actually consisted of ACORN canvassers filling out false voter registration forms, which led to no fraudulent votes; it was ACORN that was defrauded. In another, the brother of founder Wade Rathke was found to have embezzled a large amount of money from the organization.

Then there was the “sting” operation by James O’Keefe, in which a selectively edited videotape appeared to show low-level ACORN employees agreeing to go along with crimes. All of this led to ACORN being defunded by Congress.

The film goes through the whole story in typical liberal documentary fashion, pulling together news footage, archival video and talking heads; it elicits anger and outrage in the exact same ways that most other docs of its ilk do.

O’Keefe’s coconspirator Hannah Giles cooperates with the film but has nothing particularly introspective to say about her role in the matter. Although, in the film’s most compelling scene, Giles meets face to face with former ACORN CEO Bertha Lewis.

We get cameo appearances by such Trump-era bad-faith people like O’Keefe, Sean Hannity, and the loathsome Congressman Steve King. We’re reminded repeatedly that the degradation of truth in our politics by no means began with Donald Trump.