The ominous comedy of My Neighbor Totoro. 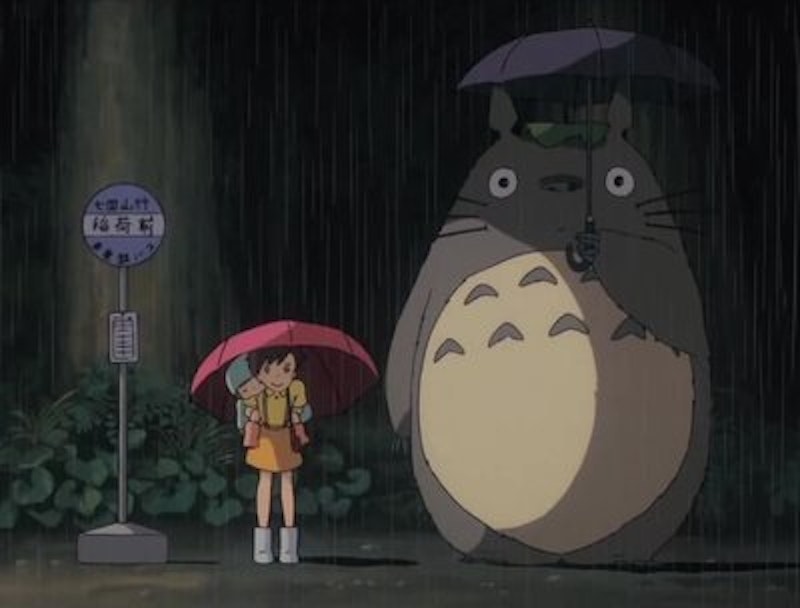 This is part of a series on 1980s comedies. The last entry, on Bon Voyage, Charlie Brown, is here.

My Neighbor Totoro is a comedy because it chooses not to be a tragedy. Hayao Miyazaki’s iconic 1988 anime is a carefully gentle story, in which every intimation of danger resolves with quiet cheer, and every sadness is temporary and averted. But the film’s very circumspection casts an ominous shade on the sunny story. Everything has to be arranged just so, each panel drawn with love, to conceal the face of grief.

The plot of My Neighbor Totoro barely exists. The film’s set in postwar Japan, and focuses on the Kusakabe family. Tatsuo, a university professor, moves to the country with his daughters, Satsuki (12 or so) and Mei (4). The new house is benevolently haunted, and Satsuki and Mei soon meet a giant adorably fuzzy wood spirit, Totoro, in a tree near their home. The girl's mother is in the hospital with an unnamed but extended illness; she’s supposed to come home for a weekend, but then isn't able to. The girls are upset, Mei tries to get to the hospital on her own and gets lost, and Totoro summons a giant cat bus to find her. The bus takes the two girls to the hospital, where they see their father and mother chatting comfortably, and planning for when mom comes home. That's the end of the film.

Both the mother's illness and the encounters with the wood spirits are presented with a steadfast refusal of drama. There's little suspense or development; instead, the pleasures of the film are in the observational details, and the low-key gift for imagery. One of my favorite sequences is when the girls first enter the house, and their father tells them to take off their shoes. Instead, Satsuki keeps hers on, and crawls around, knees bent, elaborately keeping her feet off the floor.

More famous is the scene in which Satsuki and Mei wait for the bus that's supposed to be carrying their father home. It's raining, and they've brought their father's umbrella, which he left behind by accident. It gets later and later and then to the girls' surprise, the enormous Totoro comes to stand with them. He's getting wet in the rain, so they pass him the umbrella, and he stands companionably by their side, the umbrella held delicately in one paw, shielding his furry bulk.

The scene is unbearably cute, not least because it’s haunted by something that isn't cute at all. Totoro isn't frightening, despite his toothy roar, but when the girls' dad fails to get off the bus as planned, the scene takes on a twilit dread. Mom's gone, dad's late; the light fades. The girls are alone, and who knows what's happened to their father. Totoro is a comforting spirit—but it's never good to need comfort.

Dad shows up soon enough; he just missed his train. Nothing's really wrong, just as nothing’s really wrong when the girls' mother has to cancel a planned weekend at home. She just has a cold. Satsuki is overreacting when she turns to an elderly neighbor and suddenly wails, "What if my mother dies? What if she's already dead?"

"What if she's already dead?" is a fantasy; it's Satsuki letting her imagination get away with her. And yet, it's much less fanciful than a lot of things in the anime. Friendly spirits walk the land; dust mites are living critters with wide blinking eyes, which rush to hide in the ceiling when you open a door to the room where they lurk.  The girls' father even accepts the spirits as fact, and their other neighbors believe in them as well. The good monsters are real; death is not.

But what if it's the other way around? There's another possible narrative here. Maybe the fantasy world and the friendly ghosts aren't real; and maybe Satsuki's quite reasonable fears are, in fact, reasonable. Mom, we’re told, is safe in the hospital. But maybe my neighbor Totoro is in fact a ghost, caring for the children because the person (or people?) who’s supposed to care for them is gone.

Of course, the anime’s fiction; there's no real story. It's just drawings on the screen, which is why it's so easy to slip from truth to fiction, like those dust mites slip into the walls. Acorns grow to trees in a single evening, one frame following another without visible seam. The film loves the wonder and joy of making a world from scratch. But it also, off to the side, raises the unsettling question of why we need the fantasy. What’s happening that we need to draw Totoro here? What if it's not Totoro, who is lying on their back there in the forest, buried under the trees?

Many of Miyazaki's later films are less gentle than My Neighbor Totoro. Feature-length epics like Princess Mononoke (1997) and Spirited Away (2001) are by turns sad and frightening. Though they have funny moments, they aren't well-described as comedies. Totoro is lighter fare; it's filled with laughter and magic and happy endings. My neighbor Totoro won't let anything bad happen. That's why you have to believe in him, as long as you can.