Film Review: You Were Never Really Here Doesn’t Have Much of a Plot

Joaquin Phoenix, however, is worth watching. B 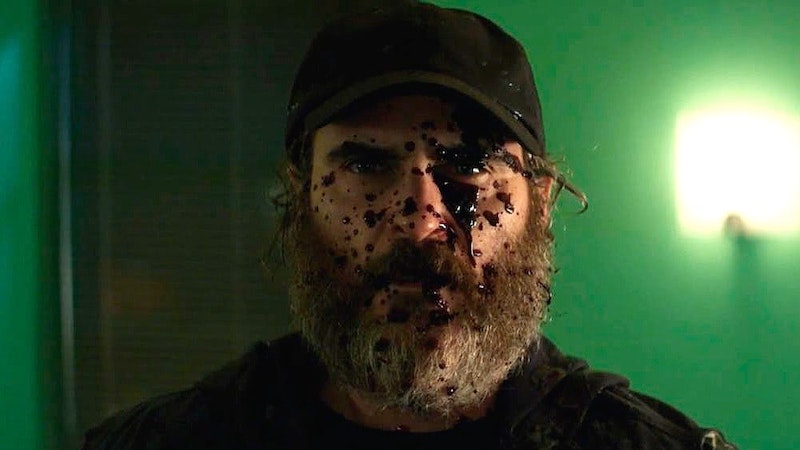 Scottish director Lynne Ramsay returns with You Were Never Really Here, which features a gross, down-and-dirty performance from Joaquin Phoenix, probably the grungiest in a career full of them. You Were Never Really Here may be a tick belong Ramsey’s two masterpieces, Morvern Callar and We Need to Talk About Kevin, but it’s still one of the year’s most intense and gripping films.

Based on a novella by Jonathan Ames, You Were Never Really Here is one of those movies where there’s much more going on than what’s implied by a simple plot summary. Phoenix plays Joe, a war veteran and former FBI agent wracked with PTSD and hallucinatory visions.

Caring for his elderly mother, Joe has an off-the-books sideline as a rescuer-for-hire for sex-trafficked girls. He gets an assignment to rescue the daughter of a powerful politician, but things go quickly awry when various connected people wind up dead. It gets quite violent, before ending on a somewhat surprising note.

Sex trafficking panic, especially of the kind depicted here, is an overused movie trope, and there’s also a House of Cards problem. There are plenty of real-life reasons to distrust top politicians, especially in New York, without making up bogus ones like their participation in a murderous teen sex trafficking ring.

But I didn’t mind that much, because once again, this isn’t a film in which the plot is important. What really works here is the atmosphere, as created by Ramsey’s direction and cinematographer Thomas Townend. The look of the film shows a New York City that’s informed by the cinema of the 1970s, without trying to explicitly recreate it. What everyone else saw in the Safdie Brothers’ Good Time, I saw in You Were Never Really Here.

The other key element is the score by Jonny Greenwood, the Radiohead guitarist who has emerged as a major film composer, mostly for his work with Paul Thomas Anderson. I didn’t care for his Phantom Thread score, but this is a much better fit.

You Were Never Really Here isn’t an easy sit, but it’s worth it for one of Phoenix’s best-ever turns.

Nothing Works in Blumhouse’s Truth or Dare. D

Blumhouse’s Truth or Dare is a high-concept, gimmick horror film, and that’s okay. What isn’t is just about everything else, from performances to execution to the filmmaking itself.

The latest film from the Blumhouse factory, whose brand seems to be “horror films that are cheaply produced, high-grossing, and wildly over-praised,” Truth or Dare was directed by Kick-Ass 2 auteur Jeff Wadlow. It takes a somewhat creative premise and makes an unsatisfying hash of it.

Lucy Hale (Pretty Little Liars) and Violett Beane (one of the missing girls from season 2 of The Leftovers) play best friends who probably shouldn’t be, since the plot gives them a backstory so full of multiple betrayals of one another. They, along with a large, mixed-gender group of non-descript pals, take a spring break trip to Mexico, where they stumble into an old temple, and play the titular game.

This activates an ancient curse that sets off an eternal game of Truth or Dare where if the person whose turn it is either lies or refuses the dare, dies. The girls and their friends spend the rest of the movie trying to beat the curse, through ever-more-convoluted means.

There’s a lot that goes wrong, but the worst of all is the cast. Hale and Beane aren’t terrible, but the male portion of the cast consists of four or five white guys who are presence-free, charisma-free black holes. I kept losing track of which boring douchebag was dead and which wasn’t. Only Hayden Szeto (from The Edge of Seventeen), as the gay Asian-American of the group, makes any kind of impression, but his plot ends absolutely appallingly.

But that’s not all. The rules keep changing. There’s a long expository scene that gives the film’s mythology an elaborate, Catholicism-filled backstory that ends up not mattering at all. This silly horror film keeps bringing in serious real-life issues like suicide, trauma and police-involved shootings, without giving them any sort of gravity. And the ending is both convoluted and stupid.

There’s been a boom of “smart” horror, stuff like The Witch, The Babadook, and It Follows, which can be appreciated even by those who aren’t exactly horror people. But Truth or Dare isn’t in that tradition; it’s just a gimmick horror movie that fails at its own gimmick.

Isn’t it about time someone made an indie movie about adult brothers coming to terms with their long-dysfunctional relationship?

Aardvark is a clichéd indie movie starring three actors who are always welcome on screen, but fails to adequately use any of them. It’s also hurt by its resemblance to four different movies made by the Duplass brothers between 2003 and 2010.

Directed by first-timer Brian Shoaf, Aardvark stars Zachary Quinto as a mentally unwell young men, who spends most sessions with his therapist (Jenny Slate) trying to come to terms with his estranged, mid-level-actor brother (Jon Hamm.) Does Hamm come to town? Of course. Does he then have an affair with his brother’s therapist? What do you think?

The short-lived sitcom The Grinder, which starred Fred Savage as a small-town lawyer overshadowed by his brother (Rob Lowe) who played a lawyer on TV, was a much better version of this same movie.

I’m not sure who this movie is for or what the filmmakers were going for. It’s not particularly funny or affecting, and Quinto, who’s supposed to be playing a sympathetic character, comes off as annoying as hell most of the time. Hamm and Slate are both fine, but I’d rather see either of them in a better project (Hamm has another film, Beirut, also opening this week.)