Unlike Bohemian Rhapsody, the new Elton John biopic is less beholden to clichés and doesn't feel the need to soft-pedal the fact that its protagonist is gay. B 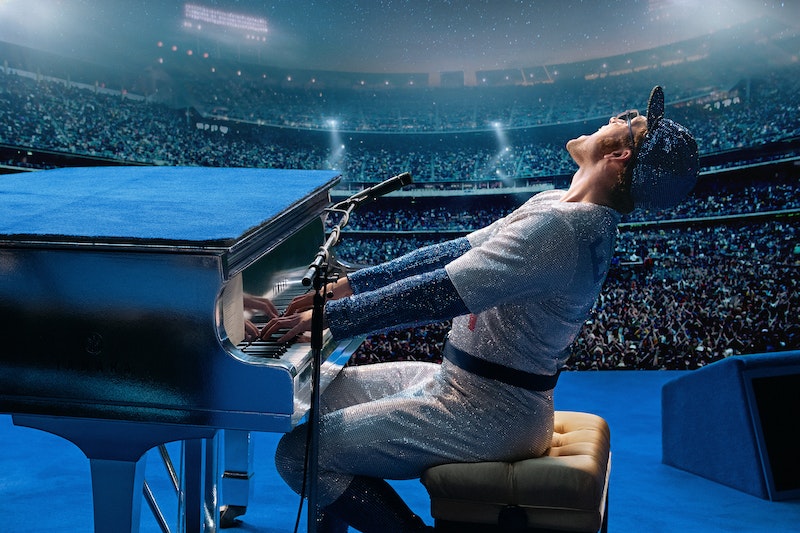 Like last year's miserable Queen film, which was inexplicably rewarded by both audiences and awards voters, Rocket Man is a biopic of a flamboyant English rock star, which starts in the early-1970s and ends in the mid-1980s. Both films deal with the star's strained relationships with his parents, his fraught but strong bonds with his musical collaborators, his brief relationship with a woman, and his tie-up with a male manager-turned-lover who turns out to be a loathsome villain.

It even, sort of, has the same director, as Rocketman is directed by Dexter Fletcher, who finished up Bohemian Rhapsody after Bryan Singer’s firing, but wasn't credited.

Rocketman is superior to its cinematic cousin in most respects. The filmmaking is better and more inventive, it's less beholden to clichés, and it doesn't feel the need to soft-pedal the fact that its protagonist is gay. With certain magical realist touches, the film is presented more in the Broadway musical tradition, in a way that works well. It recalls probably the best music biopic this decade, Bill Pohlad's Love & Mercy.

But Rocketman has flaws. It uses a framing device that's unnecessary and is over-reliant on montages. The film, while it reproduces Elton’s costumes right down to the stitch, cares not one iota about chronological accuracy of its presentation of the singer's songs. And one gets the distinct sense that John, who’s credited as an executive producer, is using the biopic to settle scores with certain people, most notably his mother, father, and ex-boyfriend.

The film stars Taron Egerton, best known from the Kingsman movies, as John, and in the part, he appears to age 30 years, even though only about 15 have passed. As a young boy named Reginald Dwight, he's a piano prodigy despite being raised by an indifferent father and a boozy, cruel mother (the latter portrayed by Bryce Dallas Howard, finally displacing the lady from The Help as the vilest character she's ever played.)

John then quickly gains rock stardom as a young man, shortly after he meets lyricist Bernie Taupin (Jamie Bell), with whom he collaborates on all of his major hits. Rocketman wisely establishes that the relationship between the two of them as songwriters is the most important both in John's life, as well as in the film. The movie also has the benefit of John and Taupin's first-rate song catalog, which is mostly well-presented, although Egerton can't quite hit every single high note.

Rocketman sets the musical numbers in real-world scenes, rather than on stage, and this is a good choice, even if the script keeps returning to metaphors that are more than a bit on the nose.

Later on, the film veers more into Walk Hard-like territory, as John becomes a drunk, addict, and all-around arrogant jerk. It mostly deals with John in what's depicted as an abusive relationship with manager John Reid, played by Game of Thrones' Richard Madden as a somewhat one-dimensional monster. (Reid was in Bohemian Rhapsody as well, also played by an actor who was on Game of Thrones, Aidan Gillen. And this is going to shock you, but Bohemian Rhapsody left out the part about Reid being gay.)

Rocketman also touches on John's brief marriage to Renate Blauel with devastating brevity. He meets, courts, marries and divorces her all in the span of about 45 seconds of screen time. Which, come to think of it, is only slightly less time than Bohemian Rhapsody devoted to Freddie Mercury's relationship with Jim Hutton.

The film ends with an abrupt epiphany, one that results in Rocketman leaving out every notable moment of John's life after 1985, from his Lion King songs to the Princess Diana tribute to his multiple stadium tours with Billy Joel to his marriage to David Furnish and subsequent fatherhood.

Rocketman is going to please crowds, make a lot of money, and possibly introduce Elton John's music to a new generation of fans. It's got a lot of brilliance in it, but it doesn't get all the way there.