I've Seen This Movie Too Many Goddamn Times

Rocketman is a feeble fantasia clearly made for foreign markets where censorship is law. D- 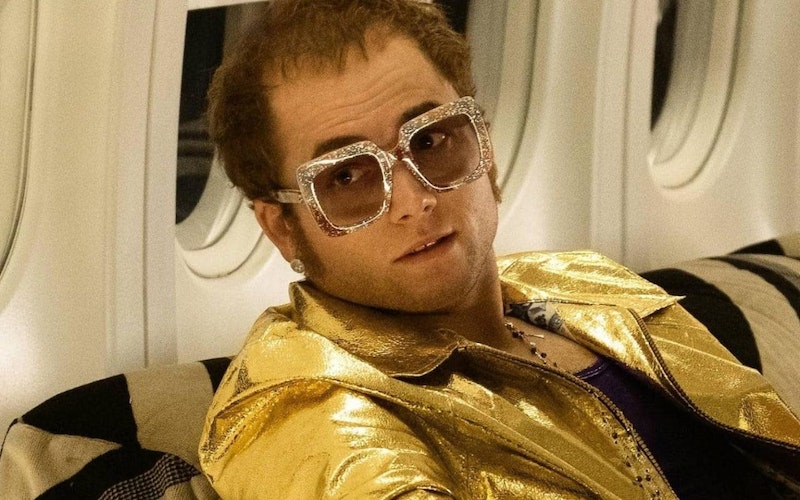 After sitting through two hours of the airless Elton John biopic Rocketman, my family and I struggled to think of more than two successful famous musician movies: Walk the Line (Johnny Cash) and I’m Not There (Bob Dylan). The former is a fine example of the straightforward rise, fall, and redemption arc, and the latter is as bold, risky, and idiosyncratic as its subject. Recent musician biopics like Love and Mercy (Brian Wilson), I Saw the Light (Hank Williams), and Miles Ahead (Miles Davis) were all spoiled by too many cooks in the kitchen, and they deserved to bomb. So did Bohemian Rhapsody, which became a massive hit despite a notoriously fraught production. Let’s not forget that Hollywood willingly cut what little sex and drug use was in Bohemian Rhapsody when they sent it to China and Russia—Freddie Mercury isn’t gay in those dictatorships, countries we have no business dealing with in the first place (except, of course, the box office: the only moral arbiter in moviemaking). Any industry that kowtows to government censorship has no right to talk about inclusion riders or complain about anything our vulgarian president said.

Even so, Rocketman didn’t have to be this bland. Elton John isn’t famous for his sexuality or prodigious drug use, he’s famous for his songs. He made one of pop’s few flawless double albums in 1973 with Goodbye Yellow Brick Road, a masterpiece that’s given short shrift in Rocketman. Only two of its songs appear here: “Bennie and the Jets” (a given), and the title track, sung by Bernie Taupin (Jamie Bell) toward the end with a completely different melody, because remember, this is unfortunately partially a movie musical, which means awful new arrangements of songs that needed no alteration. Remember also Julie Taymor’s insufferable Beatles movie musical Across the Universe—no, let’s not, never again. Danny Boyle’s upcoming fantasy Yesterday looks more interesting than a bland career overview. Along the same lines, I’d like to see specific events and periods made into features. Who doesn’t want to see a movie about their tweaker days in Hamburg? Or tripping at Peter Fonda’s house in 1965? That one would never be made, of course, because Paul wasn’t there.

Taron Egerton plays a fine Elton John, but he has nothing to work with. The movie zips by and covers everything with cursory glances before moving on. Its chronology is confused, with John performing “Crocodile Rock” at his LA debut at the Troubadour (again, imagine a Beatles movie where Brian Epstein sees them playing “Day Tripper” or “She Said, She Said” in a Liverpool dive). And how in the world could you make an Elton John movie without including his “Funeral for a Friend/Love Lies Bleeding”? It should’ve opened the movie! Even more surprising, though not necessarily disappointing, is the absence of “Candle in the Wind,” not only his biggest hit but one of the best selling singles of all time (at least in its 1997 re-recording dedicated to Princess Diana instead of Marilyn Monroe). Instead, we get the typical tale of a prick father, an alternately supportive and judgmental mother, a precocious rise, a precipitous fall, and a nauseating series of title cards at the end that detail John’s charity work and his 28 years of sobriety. Who gives a shit?

I’m reminded of Her Smell, Alex Ross Perry’s disaster of a faux-Courtney Love biopic that didn’t work because the prefabricated pop punk score by Bully were no match for Love’s soaring songs on Live Through This. We’re treated to all of the backstage drama and diva histrionics without any of the compelling art that made us care in the first place. Who is Courtney Love without her music? A fucking nutcase, and we have plenty of those. Similarly, Elton John may look fabulous in Rocketman, but his life as depicted is all too ordinary. Who cares about the absent father that comes groveling for autographs to hawk once his “poofter” son becomes famous? Isn’t that a given? Haven’t we seen this movie too many times before? I want to see Elton John performing his songs as they were written, not bastardized by singing actors given altered melodies and crooked cadences. It’s a film that has all the depth of its advertising, and despite running two hours, doesn’t cover but instead glides over its subject’s life. Rocketman may play (with cuts) all over the world, but will anyone remember it in a decade? Five years? Six months? Please. Does Hollywood care? No.