The Shrapnel Reality of Donbass

The Ukranian film presents a harrowing view of the brutalized Donbass region. A 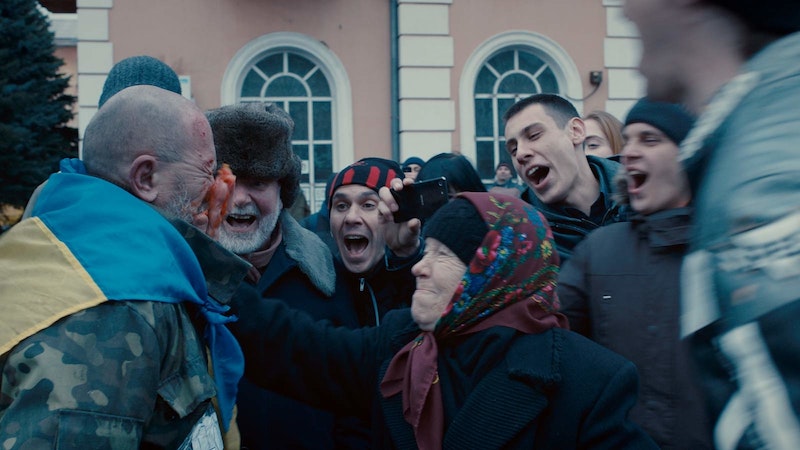 Dead-eyed pundits insist Donald Trump is the avatar of the “post-truth era." The narrative is that integrity, transparency, and legitimacy don’t matter as much as access, spin, and influence. Watergate could never happen in the 2010s— even if the powers that be cared about maintaining an appearance of just operation, who’s going to check them? It’s much easier to deny, lie, be disingenuous, the moment’s already passed and nobody’s still paying attention to last week’s news.

Of the few movies I saw at this year’s Maryland Film Festival, none left as strong an impression as the Ukrainian film Donbass. Sergei Loznitsa’s newest feature thrusts the viewer into the midst of the war-torn Donbass region, in turmoil since 2014, when conflict between the Ukrainian armed forces and the self-proclaimed pro-Russian Donetsk People’s Republic devolved into violence.

The conflict has raged off-and-on since then with no end in sight. The manipulation and manufacture of news, is a major theme of Loznitsa’s film, and possibly why all information coming out of the Ukraine at the moment is so murky. The film hauntingly begins and ends with some real-life “crisis actors” capitalizing on the chaos and destruction in Donetsk, with harrowing results.

Loznitsa’s film has the acerbic, satirical bite and absurdity of Sacha Baron Cohen’s This Is America, but in a milieu much more immediately chaotic than “Trump’s America.” Women wait in line at one of the many army checkpoints along the roads, discussing their night before at the bar, when rocket fire obliterates a bus in front of them and dead civilians fall out of the blown-out windows. The insouciance with which Donbass’ administrators, soldiers, and citizens extort, assault, protest, and defy is lyrical, almost literary. I couldn’t help but think of Strangman’s kangaroo court in Ballard’s The Drowned World or the imbecilic ministers in Ngũgĩ wa Thiong'o’s Wizard of the Crow. People in Donbass cower in moldy bomb shelters or hide from marauding soldiers in the streets. Meanwhile, the poisoned webs between governments, magistrates, and journalists further confuse the situation. The only certain reality of Donbass is shrapnel tearing through flesh.

Last week, Ukraine swore in its new president, Volodymyr Zelensky. He’s typical of the post-truth quagmire in Ukraine, and he could’ve been a character in Donbass. Before politics, Zelensky was already famous in the Ukraine for portraying a righteous president. Al Jazeera says: “While he has a law degree from the Kiev National Economic University, he has never practiced law. He also has no political experience. His lucrative production company produces TV shows, feature films and comedy series. Over the last three years, he has been starring in a hit political TV sitcom, the Servant of the People, where he fights corruption as a teacher-turned-president. He gave his political party the same name as his show.”

Donbass is a film full of pageantry, complex cinematography, and striking vignettes. However, one could view the film as a more accurate portrayal of life in Eastern Ukraine than whatever stories the nationalist or Russian-language news agencies produce. The horror, apathy, exhaustion, dereliction, and brutality of daily life all spin about the viewer in a carousel of absurdity. If no one can grab a thread of truth in the midst of chaos, we might as well close our eyes.