Our blockbusters make money by flattery, offering impossibly innocent characters who are nevertheless all-powerful. Aladdin is no exception. D 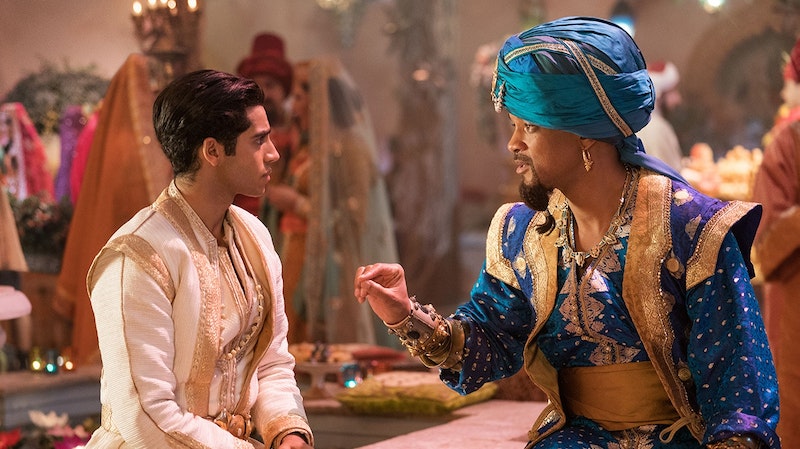 There's a new Aladdin in theaters, a popular movie in search of a reason for existing. Audiences loved Robin Williams in the 1992 animation, back when the revival of Disney was still a cause of joy, and Disney loves money and your attention, so they decided to redo it. The CGI action is fun, but the songs aren’t, and although we'll all applaud the boring and moralistic female empowerment girl-pop, who really wanted more of that in their entertainment?

Disney has no idea what to do with itself, just after acquiring almost every property worth buying in entertainment—Marvel, Pixar, Star Wars, and even an entire studio: Fox. As a measure of this failure, Disney managed to lose money on a Star Wars movie, which was previously considered impossible. More people went to see the revival of the Skywalker family soap opera that weekend in 2015 than went to church to hear about the Holy Family. But the yearly sequels made less and less money until Solo turned out to be a failure at all levels, from production to the box office.

When it comes to turning its old animation properties into CGI live action, Disney has made a lot of money, but nobody remembers anything about the new Cinderella or Beauty and the Beast. Can you even remember the actresses who played these fairy tale princesses? It doesn't really matter, since the money is rolling in and people's attention is firmly on Disney—starting with pre-literate children whose imagination and memory are the first targets of the corporate strategy.

But sometimes even Mickey Mouse fails. Earlier this year, Disney had a big flop with a beautiful movie, Dumbo, by Tim Burton, who’d previously made Disney a billion dollars by turning Alice in Wonderland into a live-action CGI movie. I'm guessing Burton won't be asked to try his hand a third time—the corporation is done with unreliable genius. Mediocrity is preferred and that's the bet in Aladdin, whose cast mostly comprises unknown, uninteresting actors and Will Smith doing his best to breathe life into the blue genie animation, with very little success.

Smith said he tried to bring back his 1990s success—comic Will Smith, energetic, flamboyant, histrionic, good-natured, and reassuring in his willingness to enfold everyone in his handsome persona. Remember Men in Black (which was just remade, soon to hit theaters)? Or Bad Boys (which is getting a few more sequels)? Smith has said Disney might do with a bit of his hip-hop confidence. He's either prematurely senile or the CGI stripped him of his charm.

The story itself is simple, so it didn't need to get in his way. A poor boy, Aladdin, a thief in the marketplace, meets the princess of an Arab medieval town, but their romance is doomed by the evil vizier who usurps her father's sultanate—until the magical genie helps them along—and happy end! By design a deus ex machina, it should work on autopilot—a story about freeing a beautiful girl from patriarchy and a daring boy from poverty, and love conquers all.

Instead, it only teaches you that American teenagers are boring. It may seem impious to dislike the young, but whereas they should be brimming with potential—why we are so curious about them in the first place—they're flat. The princess's magically-obedient tiger is as unable to make her seem strong as the evil vizier's cobra staff can make him seem evil. As for the protagonist—he's got a monkey, a magic carpet, and a blue genie and he's still boring whenever he opens his mouth.

Since the characters are simple do-gooders, the CGI is more interesting than they are. But their incompetence may be a requirement for this sort of entertainment to work—people might actually enjoy it, since no one need envy the talentless. Bad entertainment spares audiences the need to confront the complexity in our own hearts.

Aladdin is fine if you want the millionth PG romance between a daring, carefree boy who's not so smart, but really has feelings inside and a whip-smart girl who wraps him around her fingers but is actually shy and a little afraid of the world. If you loved the bad boy-smart girl high school romance in Aquaman, but instead of the extremely charming Jason Momoa you wanted a small kid who seems a little dumb, you're in luck.

Worse than the failure of acting, characterization, and musical entertainment is the director: Guy Ritchie. He used to make fun action-comedies like Lock, Stock, and Two Smoking Barrels, Snatch, Rocknrolla, and Sherlock Holmes. How he could direct something so uninspired I don't know.

Our blockbusters make money by flattery, offering impossibly innocent characters who are nevertheless all-powerful. Disney has perfected this art. It's what Marvel's Black Panther and Captain Marvel, Rey and Finn in Star Wars, and now Aladdin all have in common—they’re morally perfect and yet beat every enemy. Their only fault is they don't believe in themselves enough—their super-power is belief in fantasies.

This is far worse than the corporate-approved feminism of Princess Jasmin wanting to be a ruler instead of a housewife. We're heading instead for a situation where a woman on a throne, or a housewife, will recite the feminist pieties onscreen before returning to complete blandness.

We're not going to overcome therapeutic liberalism without more daring writers. Does no one in Hollywood have the courage to describe what a poor urban boy or elite girl really might be like and what comic impossibilities might lead them to love and happiness? The writers are not Middle East scholars—the best they could do is take a chance on telling the truth about American society now. Maybe they lack ambition.