Elton John Biopic Offers a Cover Story, Not a Story

Rocketman tap dances around the truth, gets lost. 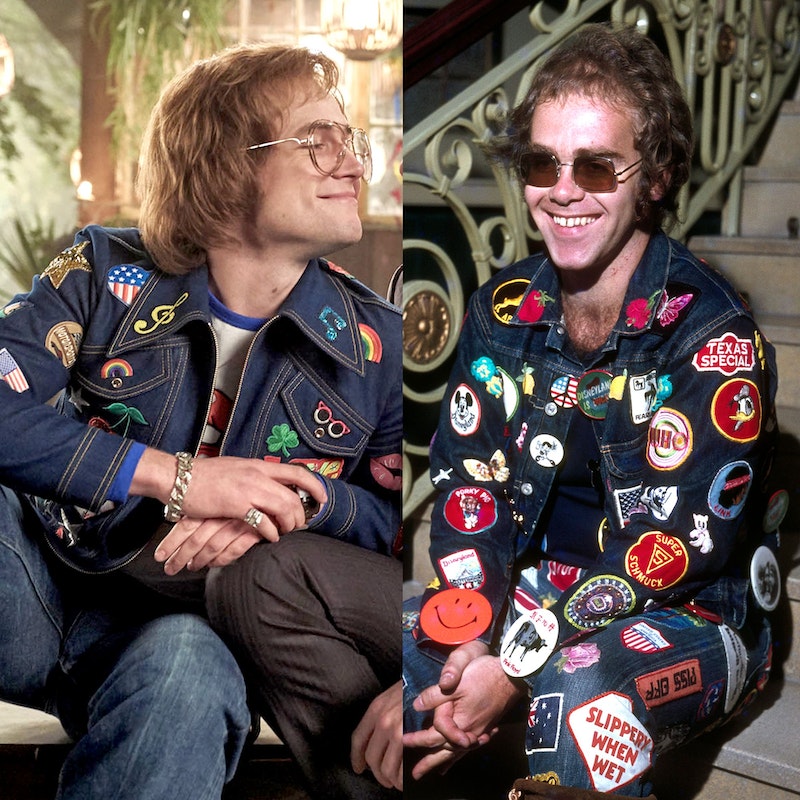 Elton John, making an announcement to his encounter group: “Real love’s hard to come by.” He sits down heavily, a sack of potatoes. “So,” he says, “you find a way to cope without it.” The encounter group says nothing. That’s how it is all through Rocketman. Those people are just there, stuck, while Elton talks. That’s group therapy for Elton John, whose spirit appears to lie heavy over this production.

Rocketman tells how a perfectly ordinary, well-adjusted fellow emerged from a pitiless childhood and endured chaotic extremes of self-indulgence before making it through therapy, after which he was splendid and led a good life. The movie shows us that Elton, as a boy (Matthew Illesley), was a porcelain beauty, luxuriously equipped with cheekbones and lips behind his clunker glasses. Elton the young man (Taron Egerton) is, I think, also at times the product of wishful thinking. He throws enough tantrums to be recognizable as Elton John, but only enough and all of them directed at Bernie Taupin (Jamie Bell). In return the script lets Bernie be right about everything. Meanwhile, the film Elton seems like somebody who generally gets on with people, which I doubt is the case.

Starting out as a young pianist on tour, the pudgy little reject isn’t a nullity hanging on to the group. Nor is he a loudmouth busting things up. He’s a self-respecting young man who drinks his beer with everybody else and hangs out with the soul singers. As a celebrity he’s seen hassling nobody who isn’t Bernie and in conflict with no one who isn’t a sleazy music biz type or his frightful mother or father (Bryce Dallas Howard, Steven Mackintosh). The unoffending, regular-guy side of Elton is sketched in, not dwelt on like the boy’s ivory face. But the sketching in obliterates the truth, leaving us without a story to follow. Bohemian Rhapsody was snapped together from plastic parts, but it snapped together firmly. Rocketman has been smoodged together. The elements of the story are there: shitty dad, shitty mom, mighty talent, flaming adulthood. But they don’t join together because we don’t see a messed-up, struggling young man fighting to get past himself and become strong.

To show real-life Elton would mean showing someone who was frequently an asshole and a clown and who is now a bit less so. Vanity flinches, and Rocketman is all flinch. We don’t even see shy Elton turn himself into the knockout stage performer who’s been celebrated for so long. There’s one panic spasm at the Troubadour, played as a joke, and that’s it. The challenge ought to be at the center of the film, but instead it’s a tic, something the scriptwriter drags in for one inadequate mention after another. “You got to kill the person you were born to be in order to be the person you want to be,” says a heroically enunciating soul singer. “Let ’em know who you are,” says another character, an advocate for wild stage costumes. A third gives this baby-boom aria: “You can be anyone you want. And do anything you want. And it’s going to be a wild ride.”

Rocketman, as a story about one man’s struggle toward his personal truth, is kind of a dud. It’s more of a piling up of all the reasons this particular person has to be unhappy, with great emphasis on things said to him by loved ones. These comments are received in monumental close-ups. Mom makes a remark about his hairline, and boy Elton’s face bends with pain. Adult Elton’s face, a pile of suffering mashed potatoes, takes the impact of “Do you know how disappointing it is to be your mother?” (“Oh my God,” breathed the man next to me.) The child and adult actors lay into their roles manfully, with Egerton going Mike Meyers during his coming-out scene: “a poof-tah, a fairy, a queen.” Gemma Jones is fine as the grandma who steers the boy Elton right. Someone is better than fine as the music instructor that the kid Elton auditions for, but she doesn’t seem to be credited.

Dexter Fletcher’s direction is accomplished, especially the staging of the early-1970s Laurel Canyon house party that Elton trails through (“Tiny Dancer”) while wondering what’s up with Bernie and Bernie’s girl for the night. All the musical sequences are elaborately staged and give work to many skilled people, but they’re about as smart as theme-park rides. But they illustrate banalities: here comes the loneliness, here comes the decadence. And the script, by Lee Hall, is terribly ripe. “I love you, man. I do,” Bernie says at one point. “But… not in that way.” A sympathetic brunette woman: “I’ve watched you perform so many times, and you’re always so open and personal and honest. It must be lonely sometimes.” Elton, getting real with his encounter group: “…and there’s problems with weed, anger management, and prescription drugs.” But we’ll leave that to the group. They can listen to him.