The Awful Truth is either very high-minded or very, very dirty. 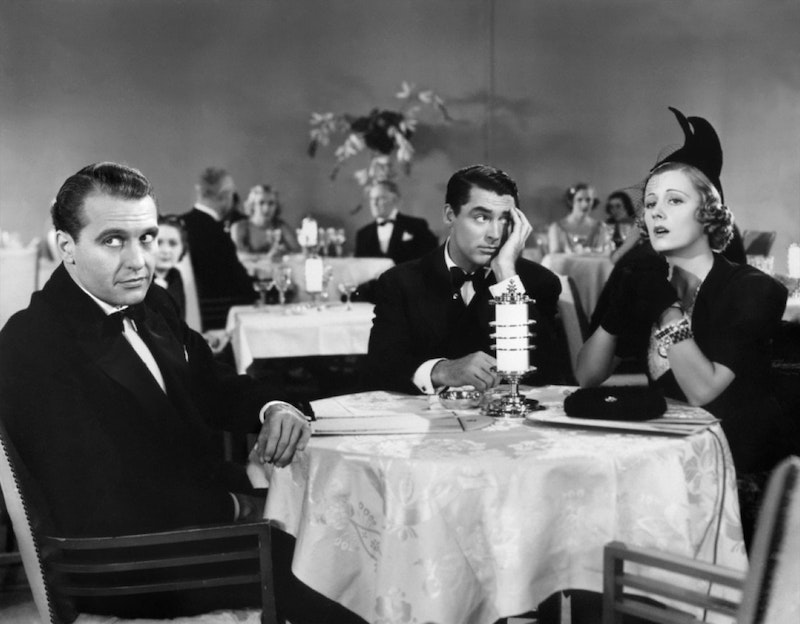 This is part of a series on screwball comedies. The previous essay on The Philadelphia Story is here.

The best part about Leo McCarey's 1937 screwball comedy The Awful Truth is there’s no awful truth. Filmed during an era when onscreen infidelity and sexual activity was verboten, the screenplay by Viña Delmar and Sidney Buchman is a virtuoso exercise in making scandals out of nothing. Jerry (Cary Grant) and Lucy (Irene Dunne) are a married couple whose misplaced suspicions lead to divorce and escalating shenanigans. Everybody suspects everybody else of the worst improprieties, but all those suspicions are completely baseless. McCarey creates a delightful world in which adults never commit adult sins. Or, alternatively, he creates a delightful world in which adult sins are so thoroughly common that they don't even count, so that purity and impurity are giddily indistinguishable.

Jerry and Lucy are dumped into divorce by terrible misunderstanding. Jerry returns from a trip to Florida to discover that wife is out; she had a car accident while traveling to a recital with her music teacher, Armand Duvalle (Alexander D'Arcy). They had to stay overnight in a motel. Despite boasting about his absolute faith in his wife, ("The road to Reno is paved with suspicions!") Jerry assumes the worst.

That establishes a pattern: everybody in the film always assumes the worst, even though nothing untoward ever happens. In one scene, Mr. Duvalle comes to Lucy's home to talk about her recital. Jerry unexpectedly turns up to apologize for being a jerk, and though the husband and wife are now divorced, Lucy spirits Duvalle into a separate room to prevent Jerry from thinking she was engaged in hanky-panky. Jerry is oblivious, even when the mischievous dog Mr. Smith brings him Duvalle's hat. Jerry can't figure out why his newly-purchased lid doesn't fit (Lucy helpfully suggests he may have it on backwards).

Lucy thinks she's going to get Jerry out of the house safely, but then her fiancé, Oklahoma oilman Dan, knocks on the door. Jerry doesn't want the fiancé to think Lucy is doing anything improper, so he ducks into the other room, where he inevitably runs into Duvalle. Jerry attacks Duvalle, and they race out of the apartment, prompting fiancé Dan (Ralph Bellamy) to leave in a huff.

The joke here is built on the idea that there's something improper about being alone in a room with a member of the opposite sex—and also, of course, on the audience knowing that there isn't anything improper at all. People in the film get scandalized over nothing, which means that the film can get the excitement and salaciousness of scandals without actually having to show anything particularly salacious.

The Awful Truth is like the nightclub act Jerry, Dan, and Lucy watch, in which the singer stands over a vent and has her dress blown up. The watchers all look intensely uncomfortable, as if they've never seen such a disgraceful display, even though the singer never shows much skin. It's awfully funny because it's not actually awful—just all in good fun.

You can read the film as a light-hearted riff on the morals of fundamentally innocent people. Or, as a light-hearted riff on the fact that maybe the protagonists have no morals to shock. How certain are we that Lucy and Duvalle didn't sleep together at that hotel? For that matter, the film opens with Jerry trying to get a dark tan at a salon. He was supposed to have gone on that trip to Florida, but instead went somewhere else. Where was he? Who was he with? We never find out. But the implication is that he was suspicious of his wife because he’d cheated on her. Which means that Lucy may have been suspicious of Jerry because she was cheating on him.

Maybe the point of the film is not that everyone thought guilty is innocent, but that everyone thought innocent is guilty. Perhaps that nightclub act seems so tame because we keep cutting away before we can be shocked. Lucy, Jerry, and Dan may be looking at something the Hollywood censors won't allow the audience to watch.

If everything everyone suspects is true, then Lucy and Jerry at the end of the film aren't reconciling after a misunderstanding. They've just decided to be more "continental." The moral of the story isn't "trust your spouse." Instead, it's a cheerful endorsement of libertinism.

The final famous scene deliberately elides the line between virtue and vice. Lucy and Jerry are at Lucy's aunt's house in the country on the day their divorce goes through. They're both regretting having split, and the flimsy door between their rooms conveniently keeps blowing open. Lucy's languid looks practically scream, "Take me!" as Jerry hesitates on the threshold in his too-short nightgown. Finally Jerry joins her. The camera pans to the clock on the mantle, where a miniature cuckoo Jerry comes out to mark the time—and then prances into the door opened by the miniature cuckoo Lucy.

The clock's important because it's marking the time until Lucy and Jerry will no longer be married. If they sleep with each other after midnight, then they're sleeping with each other out of wedlock. It's a race against impropriety except that it seems unlikely that they're going to suddenly stop having sex when the clock strikes. The deadline for the end of their marriage turns out to be not deadline at all.  You can have sex outside marriage and it doesn't matter. Lucy and Jerry committed infidelity, and that's considered a happy ending.

The Awful Truth, and screwball comedies in general, were set in an age when innocence was enforced. Romantic comedies these days are much more frankly sexual. And yet, the innocence in The Awful Truth —the fact that two people can't be in a room alone together without causing gossip—means that the film ends up being more dirty-minded, and cheerfully amoral, than even the most explicit sex comedy. When there is so much that can't be thought, everything you think becomes unthinkable. The awful truth is that delightful innocence and delightful corruption sit side by side, and the door between them keeps blowing open.