An Interview With the Creator of Channel Zero

Nick Antosca's horror anthology is one of the best shows currently on television. 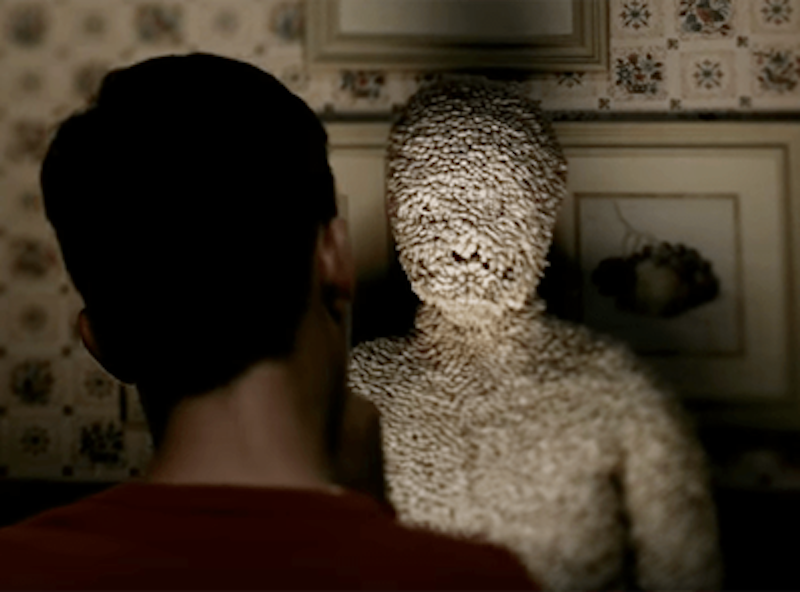 Horror is hugely popular on television; shows like The Walking Dead, Stranger Things, and Black Mirror have scored ratings success and critical acclaim with zombies, nightmare monsters, and apocalyptic visions of the future.

SYFY's Channel Zero hasn't received as much attention as the biggest television horror blockbusters. Which is a shame, because for invention and sheer bleak chills, it easily surpasses them all. The show, developed by Nick Antosca, draws its inspiration from creepypasta—short, often anonymous horror stories posted and shared in Internet forums. The first season, "Candle Cove," told the story of a cable access pirate television show, featuring a skeleton who feeds on human teeth. The second, "No End House," is about an appearing and disappearing haunted house, which literally eats the memories of those who enter it. Both are lyrical, terrifying accounts of how grief hollows people out, and replaces the self with death. "No End House," In particular, unfolds with the inevitable weight of the best horror stories, or of myth, as Margot (Amy Forsyth) is pursued from room to room, episode to episode, by her dead father (John Carroll Lynch), his mouth dripping with blood.

The last episode of No End House airs on Wednesday. I spoke with Antosca about creepypasta, horror, and where the show goes from here.

Splice Today: How are creepypasta stories special? Are they different than horror novels or horror movies?

Nick Antosca: Creepypasta is user-generated, so anyone can write it. It has the quality of an urban legend, or a folktale or a tale told around a campfire. Usually creepypasta purports to be real. Traditionally a creepypasta is presented as, "This happened to a friend of mine, this happened to me. This is a real post about an experience I had." It's a merit-based system. Anyone can put it out there. And some of them just strike a nerve. And they go viral. "Candle Cove" and "No End House" already had a built-in fan base before we adapted them. They had fan fiction and even user-created videogames in some cases.

I think of creepypasta as in the oral tradition of fantastic storytelling. You do see in creepypasta certain particular modern fears and anxieties. For example, fears about technology, like a haunted puppet show. Great storytelling is great storytelling, though, and great concepts are great concepts. When choosing stories, we just look for the things that scare us deep down and that allow us a lot of canvas to create or to elaborate on.

ST: How did you decide to make each season one story, rather than one story an episode, or an ongoing series?

NA: It actually came about because the original notion I was presented with was, "Is Candle Cove a TV show?" And I said, "Maybe it's a mini-series. I don't think it's an ongoing show that runs to seven seasons. I just don't see how you do that." I couldn't offhand see how you'd make that scary for seven seasons.

But I thought it would be a great limited series. And I also thought, there're a million creepypasta stories. There are so many great stories that are potential source material. Why don't we do an anthology series where we can adapt a number of them? The other option would’ve been to adapt one story per episode. But I just found that creatively less interesting. You can do that, but you're never going to beat the Twilight Zone, or Tales from the Crypt or Outer LImits.

So I felt like doing it as each season being its own story was kind of the best of both worlds. You'd get to adapt these great ideas, and we got to be creative and invent. And that meant that I could put together a room full of horror story tellers who I really admire and let them run free with what we already knew was a great idea. So we've done that for three seasons now. In some cases we keep a lot of the original story, in some we just take one element of the original story and build it out.

ST: How do you decide which stories to adapt?

NA: There are a lot of creepypastas that I still want to adapt. There are many that I want to adapt but can't because we can't find the original author. There're only 20 or 30 famous creepypastas: stories like "Russian Sleep Experiment" and "Jeff the Killer."

For a lot of them, you can't find the original author. Fortunately, "No End House" and "Candle Cove" were easy. The ones we've done for the third and fourth installments were not as easy, but pretty straightforward. And then there are others where I've been looking for the author for months, and I just feel like we're never going to find and be able to verify who it is. But I think that with the fourth installment, it's a much less famous creepypasta.

NA: We've already shot the third installment. We're editing that now. The fourth one we're writing. I think the plan is to shoot it early next year or mid next year. But we have three shot, and a fourth one has been ordered. Will there be more after that? Who knows? I certainly hope so.

ST: It's frustrating that it hasn't gotten more press interest. I feel like it's one of the best things on television, but it doesn't seem to get a lot of attention.

NA: There's American Horror Story, which everyone knows about. And then we're this weird cult indie show. And the nice thing is that because of our budget and our network we're allowed to live in that space. If we were expensive to make, we wouldn’t exist. We never would’ve been green-lit. But even if we had, we're not like Game of Thrones, we have a small dedicated fanbase. We've gotten amazing reviews.

As a writer—I started out as an indie novelist. And then I moved to TV, as a staff writer. But to be running a show I created, it's a dream job. We keep getting to make these weird art horror movies every nine months or so. I love it when people watch and talk about the show. But the mere act of making it and working with directors and actors and artists who I'm really excited to work with, I could never have dared hope that somebody would let me do that.

ST: The first two seasons have similar themes about grief, and about this other world seeping into ours and taking people over.

NA: The show was always designed to deal with questions of identity, loss, mental health. Those are themes that you'll see in the first two seasons, and you'll see them again in future seasons in different iterations. Because those are things that are particularly scary to me. These are not the definitive version of what the story “Candle Cove” or “No End House” are. There are things that the seasons have in common in terms of Easter eggs and little crossovers that are hidden at first. But were we to go on further they might become more visible. If we went beyond a fourth installment then the connections between seasons might start to become a little more overt.

You'll always be able to watch a season of Channel Zero on its own without having to see any of the others. But if we were to go on for a while there would be some connective tissue that would become more and more visible.

ST: The house in your version of "No End House" eats memories. That's not in the original story, right?

NA: The nature of the house changed a little bit from the original story to our version. In part because when you write a longer story you have to build a much more fleshed-out mythology.

A cool thing about the original story is that you don't know who made the house or where it came from. And in the Channel Zero version you still don't know who made the house or where it came from, but you need to understand a little bit better what it does to you. One of the things that’s really scary to me is loss of self. And the idea that the house would feed on your memories and slowly eat away at who you are was really disturbing. And also the idea that this haunted house is really psychological and personal. So the deeper you go into it the deeper it goes into you. Every room I go into the house opens another door in my head and sees something new in me. So by the time I'm in room 5 or room 6, it knows a lot about me. It's been probing and looking for my weaknesses, and by the time I'm there it knows how I'm vulnerable and it knows how to manipulate me.

ST: The show seems like it could all be in Margot's head.

NA: I wouldn't want a viewer to come away from either season thinking, "Was it real or wasn't it real? Was it all in the protagonist's head?" But I always find it interesting to have an unreliable narrator, to have someone questioning their reality, to have a sense that one's perception can't be trusted. And that's a theme that we explore in the first two installments, but in future installments as well.

ST: Can you say what creepypasta the next installment is based on?

NA: I've been told not to say yet! There's going to be a teaser for it airing with the finale this week. It will be the first season of Channel Zero that's not named after the creepypasta that it's inspired by, because we went further from the original story than we have in the first two. We really took an element of the story that we loved and expanded on it. So it's quite different. But you'll get the title and a lot more information about it this week.