Film Review: The Florida Project Is a Meandering Misstep 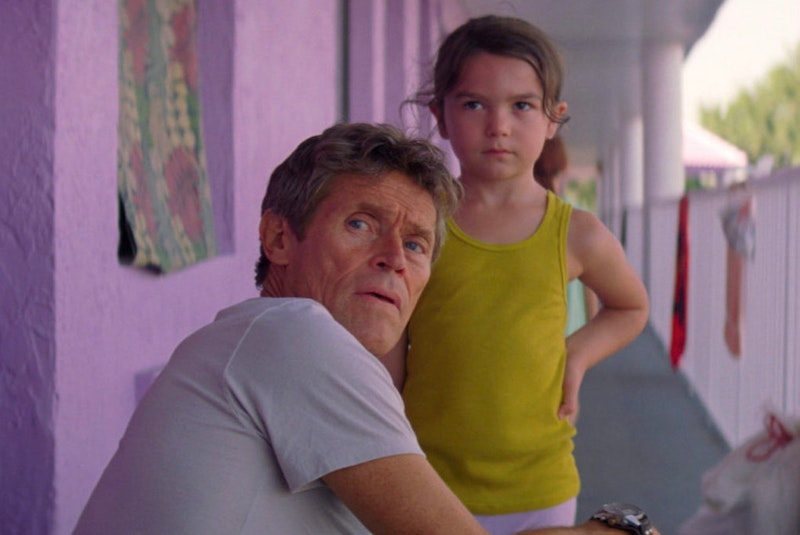 I was floored by Sean Baker’s Tangerine when it came out two years ago: shot on iPhones, a buddy comedy starring two transgender prostitutes who stalk the streets of Los Angeles salty as hell, smoking meth in bathrooms, meeting creepy johns in cars and alleys, beating the shit out of competitors and jealous lovers. A movie that was socially and culturally contemporary while still transgressive, offensive, obnoxious, hilarious, and endearing. Baker is fascinated with people, places, and zones of American life that are routinely dismissed, mocked, and oppressed by most people above the poverty line. His films are superb social commentary that aren’t defanged or coated in schmaltzy centrist-liberal goo. There are no scholarships or golden tickets out of the slums of the America that Baker’s interested in. This mix of realism and genuine, earned pathos is what makes him one of the most promising and interesting working directors in the country at the moment.

But his latest, The Florida Project, was a disappointment. Unlike Tangerine, which had a manic pace to match its grainy and super-saturated iPhone cinematography and frenzied stars, The Florida Project meanders without any forward momentum or narrative drive, languishing in a motel in Kissimmee, Florida, following the adventures of a few precocious kids born to very young and struggling parents. The kids play and cause general havoc, a nuisance to everyone else living and staying at the motel: they spill ice cream in the lobby, they spit on cars, they scream “BOOOOOOBIES!” at a sunbathing battle-axe, and they find the electrical closet and shut off the power for the whole motel.

Moonee (Brooklynn Kimberly Prince) is the ringleader, a six-year-old shit-stirrer, fearless and joyful despite her grim surroundings and chain-smoking prostitute mother Halley (Bria Vinaite). Her friends—Scooty (Christopher Rivera) and Jancey (Valeria Cotto)—are equally energetic and free of angst. It sounds ridiculous to expect angst from six-year-olds, but their reality is all they know. Their parents, particularly Halley, aren’t equipped to raise kids and live day to day, barely scraping by on rent.

Willem Dafoe plays Bobby, the landlord of the motel, and his performance was by far my favorite part of this movie: Bobby may seem like an uncharacteristically understanding and empathetic landlord, but he vividly reminded me of a few I’ve had, and his role as the Bodhisattva of the motel and its tenants was remarkably moving. One example of this and Baker’s penchant for escalating situations and scenes beyond where most other directors would stop: the kids are playing by the pool one day when a bleached, almost albino old man comes sauntering up to them out of nowhere. Clearly a pedophile, Bobby approaches the man and asks if he needs any help. The predator stammers and asks for a soda—Bobby brings him to the vending machine, buys him a Sprite, then knocks the can out of the guy’s hand and drags him by his collar off the premises, promising to call the cops if he ever comes back.

He loves the kids, and tolerates their shenanigans and irresponsible parents as best he can, avoiding and deflecting the ire of other tenants and eventually the police and child protective services.

The Florida Project is full of nice moments, scenes, and performances (particularly by Dafoe and the kids), but none of that makes up committing the cardinal sin of cinema: it’s boring. It doesn’t work as a tone poem or mood piece. The cinematography is gorgeous, as are the pastel and neon colors of greater Orlando, Florida. Baker shot on 35mm this time instead of iPhones, but gauzy sunsets and radioactive rainbows don’t make a compelling two-hour film. Even worse, the ending is so obviously tacked on and forced: Moonee’s mom is caught with johns in her room and personal ads up on the Internet, and the cops come to take Moonee away. Throughout the movie, I noticed a helicopter regularly taking off and landing right next to the motel, and I was fascinated by it—but as a device it goes unused, and by the end The Florida Project reminded me of Terrence Malick’s work (that’s not a compliment).

As the cops and child protective services close in and try to seize Moonee, she runs away and manages to get into DisneyWorld. The film ends with a shot of her sprinting towards the Magic Kingdom. As the film developed, I thought she might try to escape via the helicopter, an equally absurd and fantastical ending that would’ve been so beautiful. The Florida Project let me down because Baker’s instincts and interests are intact here, but the lazy river structure of the movie left me cold. I wish Baker and everyone involved in the movie the best, because these people deserve more money, work, and acclaim. Brooklynn Kimberly Prince’s performance as Moonee is strong enough to warrant Oscar buzz, and I’d love to see what Baker could do with Academy gold in his pocket.