No Aliens in Space

Claire Denis' High Life is thought-provoking and unpredictable. A- 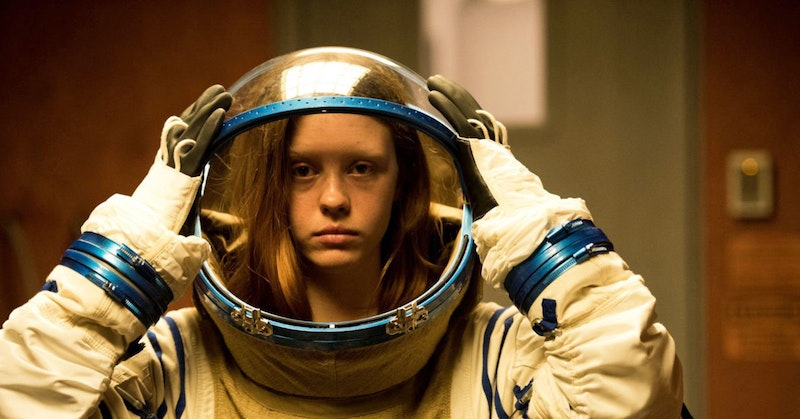 High Life, celebrated French director Claire Denis' first English-language work, fits in the tradition of cerebral, artsy space-set films like Aliens, Interstellar, and Sunshine. But it's different: there are no aliens, little science, and more sexuality than is typical for the genre. It's also thought-provoking in a way that's not predictable.

The film, which Denis co-wrote with Jean-Pol Fargeau and Geoff Cox, is set entirely on a low-fi, dingy-looking space vessel, and presumably in a not-particularly distant future. Robert Pattinson stars as Monte, a man who's introduced alone in space, save for a small baby.

Through a series of flashbacks, we learn that Monte and several others are convicts, who’ve been shot into space as a futuristic, not-especially efficient alternative to mass incarceration. Supervising it is Juliette Binoche, as an evil, Dr. Mengele-like doctor, who's there to conduct fertility-related medical experiments on the other prisoners.

There isn't much of a plot, but mostly it involves the ship heading towards a black hole, although the film doesn't concern itself with the science of black holes. But it successfully threads the needle of not outrightly stealing shots and sequences from 2001: A Space Odyssey. Most space films either pay direct homage or try hard not to, but that's not a problem here.

Pattinson is very good in High Life. Like his old co-star and partner Kristen Stewart, he's emerged post-Twilight as a natural in offbeat indie movies. Andre Benjamin, the long-missing rapper from Outkast, supplies a fine supporting turn, while Mia Goth (from Suspiria) plays a character who looks like her name should be "Mia Goth."

But High Life is stolen by Binoche, who’s chilling as the malevolent doctor. Binoche was also good in Denis' last film, last year's Let The Sunshine In, but this may be her best role yet. High Life doesn't have a lot of action. There are no space battles, and aliens never make an appearance. But it's a smart and creatively successful effort, one that doesn't leave any hint of sexuality at the space doors.