The Last Hurrah and the aesthetics of Trump. 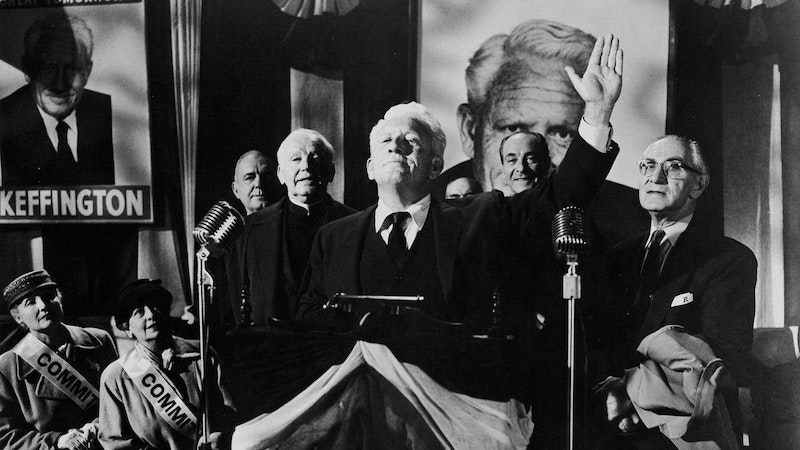 This is the fifth post in a series on political films. The fourth, on My Son John, is here.

Donald Trump is often called a fascist because he spews racist bilge and fantasizes in public about having the power to silence his enemies and critics. But there's something quintessentially fascist about a reality television star turning a political campaign into an entertainment spectacle.

Or that's what Walter Benjamin would say. Benjamin famously argued that the aesthetics of politics was the core of fascism. For fascists, Benjamin said, politics is constructed as an aesthetic endeavor, to be consumed as entertainment, even as art, under fascism, become inseparable from political ideology.

Trump and the reporters who cover the candidate, treat his campaign as an extension of his reality television brand. Pundits comment, semi-ironically, on each new Trump nickname for his opponents ("Little Marco" is widely considered his best effort). They marvel at his ability to rattle off fictions (also known as lies) with shameless facility. They parse the meanings when he re-tweets an anti-Semitic meme. Trump is the star of a reality television show about Trump running for president as a fascist.

You can see Trump foreshadowed in John Ford's The Last Hurrah, in which an aging Spencer Tracy plays simulacra of a politician. Tracy is Frank Skeffington, an Irish mayor from a New England town running for a fifth term against a feckless challenger backed by the patrician Anglo aristocracy.

Skeffington isn't a reality television star; on the contrary, he's an old school politician, not quite up on the new medium of TV. But at the same time, he is a performer. In fact, being a politician is figured in the film as in large part a performance. Film Comment praised the naturalism of Tracy's acting in the film—a strange compliment for a role that piles theatricality on bathos and tops it off with more theatricality. Early in the film Skeffington sets up his own audience; he asks his nephew, sportswriter Adam Caulfield (Jeffrey Hunter) to follow the campaign, which Skeffington characterizes in horse-race terms as a great spectacle. Adam, who has little to do in the film but gaze adoringly at the mayor, is an obvious audience stand-in, and Skeffington (and/or director Ford) proceeds to provide the expected, anticipated dramatic set pieces. Flanked by a flotilla of mugging character actors, Tracy outdoes them all as a trencherman at the tables of grade-A ham.

Here is Skeffington, mobile face stretched and pleading, convincing a grieving, impoverished widow to take a check for $1,000, the blessed philanthropic blarney flowing freely as he explains, with sincere faux modesty, that the gift came from his deceased wife. Here is Skeffington bearding the city's overlords in their posh club, speaking with impassioned bluster of the plight of the poor. Here is Skeffington waxing lyrical about his childhood poverty. Here he is advancing his schemes with jovial craftiness. Here he is accepting defeat with philosophical good cheer and humane philosophy.

The world is a stage, arranged for the triumphal progress of Skeffington—as epitomized in the final, extended deathbed scene. One of Skeffington's old political enemies is unaccountably, but dramatically, allowed into the room in the man's final moments. Skeffington closes his eyes one last time. "Well, at least he made his peace with God," his opponent sententiously declares. "There's one thing we all can be sure of—if he had it to do over again, there's no doubt in the world he would do it very, very differently."

But wait… Skeffington's eyelids flicker open! The eyes focus; the face sets, stern but still radiating good cheer and Spencer Tracy Hollywood twinkle. "Like hell I would!" the hero triumphantly announces before passing into the great beyond. The timing is so perfect, the message so glib, the delivery so adorably pat, you'd almost think you were watching a Hollywood movie rather than a campaign documentary.

The genius of The Last Hurrah is that it makes politics and Hollywood indistinguishable. The film is an ode to the talent of Spencer Tracy as much as to Frank Skeffington, and you can't tell which is which. Skeffington is lovable in large part because he is so much fun to watch—which is why Tracy is lovable too. In perhaps the movie's best scene, Skeffington convinces a hapless banker's son to become fire chief, in order to blackmail his dad, who will do anything to prevent the nitwit from humiliating himself in a high-profile post. Skeffington rattles on to the bemused and lisping scion about the wonders of driving in a big red firetruck, all the while winking to the mayoral aides, and by extension to the movie audience. Skeffington is ostentatiously playing a part—which is also what Tracy is doing. Politics is aesthetics is politics, whether you're duping some mark in the privacy of your office, or leading a band down Main Street, with the name "Skeffington!" singing from every throat.

Skeffington isn't a fascist in any straightforward sense. His exact policies are largely swamped by image-crafting. But broadly he's an interest-group politician elected by the Irish vote and committed to the issues of importance of that constituency, most notably the alleviation of poverty.

If you look more closely, though, the focus on Skeffington's personal awesomeness, combined with fuzziness on policy, does lead to a kind of under-theorized, genial authoritarianism. Skeffington uses the power of his office to bully and blackmail people to do the right thing. He threatens a mortician with the revocation of his license if he doesn't lower his prices for a poor widow. He uses his status as mayor to force his way into a private club, disrupting the snobby collusion of bankers. In these cases, Skeffington is fighting on behalf of the little guy—but fascists (including Trump) always present themselves as fighting for the little guy. The political system portrayed in The Last Hurrah has no checks and balances, and doesn't need any, since it's organized around a cult of personality. Skeffington does what he needs to do to get good work done, because that's what Hollywood stars do. And what is a politician but a Hollywood star?

Benjamin wasn't exactly wrong about fascism and aesthetics. Based on The Last Hurrah, he was just thinking too narrowly. It's not only fascism that turns aesthetics into politics, and vice versa. It's all mass politics—including democracy. In The Last Hurrah, politics is understood almost entirely though pageantry, which is how politics is understood on the campaign trail, too. Was the convention well orchestrated? Who owned Who on Twitter? Will you disavow this outrageous statement? Which pop star or athlete has endorsed you? It's not that policy doesn't matter, but that it's always packaged and sold as fandom, as lifestyle, as glamor.

Politics is an exercise in manipulation, and aesthetics is the art of that manipulation. Aesthetic appeal is power in The Last Hurrah, just as it is in democracy. Which is why, as in Germany, one of the potentials of democracy is fascism.