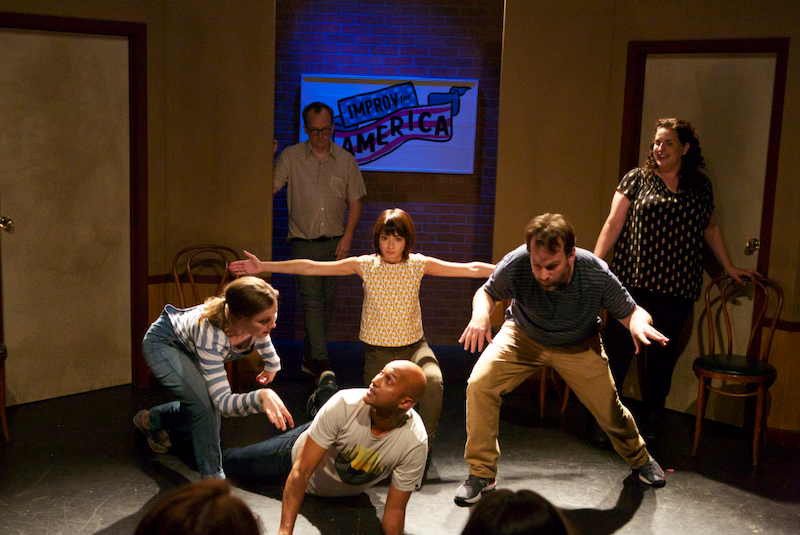 If you have any doubt that comedians are the most loathsome people on earth, see Don’t Think Twice. Mike Birbiglia’s second film as a writer/director is well-made and believable—Birbiglia and his cast are all working comedians. This isn’t a bizarre tonal disaster like the forgotten 1988 film Punchline, starring Sally Field and Tom Hanks, out of their depth telling unfunny non-jokes to canned laughter and inexplicably delighted extras in the audience. Punchline is a great example of Hollywood glomming onto a trend and ignoring any consultants and watering it down: Sing Street is a recent example (why should Spandau Ballet be allowed in any kind of love letter to rock music?). At least School of Rock had Jim O’Rourke as a consultant. To its credit, Don’t Think Twice feels authentic and personal. Nothing is stilted, and the character relationships are nuanced despite the familiar frames of the story: group struggles together, one of them succeeds; jealousy grows among the rest. There is one absolutely brilliant scene, too: the characters are all watching the SNL stand-in Weekend Live, and the musical guest is a band of six or seven people doing the most spot-on parody of Epiphany Core I've ever seen. They all sit there with their mouths agape, because there really is nothing to say.

Don’t Think Twice is accurate, but it’s far from inspirational. I’d guess anyone that sees this at an impressionable age would be dissuaded from pursuing anything close to a career in comedy. I mean, improv comedy. The film begins and ends with a short explanation of when and where improv comedy was invented. I know it’s produced so many great comedians, but I’d rather open my veins than go to an improv theater. I’m happy letting Lorne Michaels pick the cream of the crop for me. Everything about the improv group’s world is nauseating: the pre-show warm-ups (“zip-zap-zop”—just shoot me), the constant one-upmanship of jokes and quips within the group, the repellent resentments and biases that fester, and the ephemeral and inconsequential content of their actual shows. It’s all just so stupid. In fairness, improv theater never killed anyone.

Watching Don’t Think Twice, I felt grateful that I don’t exist in that world and never aspired to. It’s a misery, as if you didn’t know already. I’m a musician, and I’ve played to just as many packed houses as empty basements and hostile crowds. You’ve always got your guitar to kamikaze the set with a little feedback and amp stabbing. Music operates on a non-verbal level and can be transcendent in even its crudest forms. Standup comedy puts the performer in an incredibly vulnerable situation: high-risk, high-reward. But it’s limited by language and personality. To be validated, a comedian needs laughter and positive feedback. They need a job at a big TV show, or they need to climb the ladder to avoid personal embarrassment. I make sound collages that I’m pretty sure no one enjoys, or has even listened to in full. And I love them! The pantheon of rock stars, writers, filmmakers, and painters is splattered with blood, needles, pipes and bottles, but there’s no more depressing life than that of the standup comic. You think being a touring musician is grueling? No wonder Mitch Hedberg was on the spike. Don’t Think Twice is a great unintentional cautionary tale that should be sampled at every grade school Career Day across America.